My dad was a great storyteller, and most of the stories revolved around some kind of villain cramping his style.

They were fun, but you could see that 30 or 40 or 50 years later, he was still POed at Hawkeye Hayden, one of his grammar school teachers who apparently had been sent to PS 33 by Satan himself.

But the best, warmest, aggression-free memories for the ol’man usually revolved around food– especially free food.

His Grandma Scurr would give him a quarter for the show and he’d be able to get 5 or 6 candy bars and watch cartoons all day at the Shea’s Seneca.

The meat packing plant near his house on Fulton Street once had a neighborhood cookout with all the hot dogs and hamburgers you could eat.

His dad was a night watchman at Paul’s Pies for a while… and he would bring home enough day old pies that everyone would get full.

He was always so happy telling and remembering these vivid all-you-can-eat tales, and the stories of great face-stuffings into adulthood were always part of his repertoire as well. He wasn’t a connoisseur of good food, he was a connoisseur of food.

Before moving to The Valley and Fulton Street near my Grandpa’s family (Down the street from the Swift Meat Plant) when he was five, the Cichons lived at 28 S. Elmwood Avenue, Apartment 3, almost directly behind City Hall. 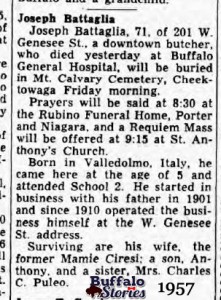 Joe the Butcher was Joe Battaglia. He came to Buffalo from Italy at the age of 5 in the 1890s. He ran his shop at the corner of Elmwood and Genesee (nearest landmark now would be the post office near Channel 7) from 1901 until he died in 1957. In finally tracking down his location and name, and then this death notice, I found his only son died a few years later and had no heirs. My ol’man may have been the last living person talking about this kindhearted man.

I’m happy to have finally dug up the full story of good ol’Joe the Butcher. He reminds me that doing something as simple and almost meaningless as ripping off a hunk of baloney can brighten someone’s day and possibly even brighten the rest of a person’s life.

Here’s to good ol’Joe the Butcher and to us all finding ways to rip off hunks of baloney.