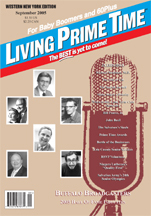 Believe it or not, a job in broadcasting is not too much different that any other job. We all punch a clock, putting in our 8 or 9 hours a day… and hope we’ve accomplished something at the end of it all. Most of us talk into a camera or microphone without much recognition or many accolades; many never fully comprehending the impact that we’ve had on so many. That’s where the Buffalo Broadcasters come in.

The Buffalo Broadcasters Hall of Fame event is not only a chance to mark for history the great achievements and pop cultural impact of some the Queen City’s favorite Radio and TV contributors… It’s also a chance to let the best of the best know how much they are appreciated by both their industry and the public.

I was once in the home of the late Jack Mahl, who spent 50 years on Buffalo Radio and Television. The only sign of that incredible run as a broadcaster was his proudly displayed Hall of Fame Award, an award the 6-foot-eight Mahl nearly broke down in tears accepting. One of this year’s honorees wrote, “Buffalo Bob Smith, Irv Weinstein, Joey Reynolds, and now me. Pinch me, I must be dreaming.” Not dreaming, only taking your rightful place among Buffalo’s Greatest.

After nearly a decade honoring nearly 60 people with induction into our Hall of Fame, we relish that we’re able to celebrate the history of Radio and Television, and at the same time, say Job Well Done to those who richly deserve it… Those who have told us the news that has impacted our lives, told us what the score was, told us whether to grab an umbrella, and even played a little music to make that long car trip to Auntie’s house a little more enjoyable.

For 31 years (and ticking), Rich Kellman has maintained the bar for not only journalistic excellence, but also for humanity, sensitivity, and empathy in reporting.

Kellman’s long list of professional awards includes Emmys, the Edward R. Murrow Award, and Associated Press Awards in Individual, Investigative, and Feature Reporting. He’s also met Popes and Presidents. While those professional milestones alone would likely make Rich a candidate worthy of the Hall of Fame, it’s his knack to connect with people, and his sheer joy in telling their stories that makes him that much more special.

Since 1974, Rich has been the constant Channel 2, and no matter the cast around him, has always left viewers with the feeling “Someone in that little box really cares for me.” And the best part about Rich Kellman is… That he really does.

The Buffalo Broadcast Pioneers was founded in 1995, and we still have a lot of catching up to do. The Golden Age Award is reserved for the pioneers in the truest sense of the word: Those who did it first, the people who had no pattern to follow, no lead blocker. These folks blazed the trail, and set an example for future generations to follow.

Like many of radio’s pioneers, Billy Keaton‘s foray into the medium came in the pre-war days when he adapted his Vaudeville routine into the highly popular “Stuff and Nonsense” program on WGR Radio. His success turned a temporary Buffalo assignment permanent. After the war, Billy’s wife Reggie joined the act, and the two hosted the “Mr. and Mrs. Show” for a decade.

While the Keatons’ voices were familiar throughout the ’40s and ’50s, their faces were soon popular as well. As a long time WGR Radio fan favorite, Billy was the natural choice to welcome the first viewers to WGR-TV in 1954. Billy and Reggie also hosted several Cable TV talk shows through the years, leaving a legacy of 55 years of entertaining Western New York. Billy Keaton passed away in 1976, Reggie 19 years later in 1995.

Several generations of Buffalonians grew up with the rock’n roll music and fun of WKBW Radio. From 1958 to 1988, one man had his hand on the rudder of the production sound that allowed KB to stand head and shoulders above the rest.

Al Lafler‘s interest in radio began when he served in World War II as a Navy sonar man. After a few years around the dial, Al knocked on the door at KB and was hired on the spot. He spent then next thirty years as an engineer and production man at the station.

It was partially his credo, “Good enough isn’t good enough,” that gave KB such a great sound over the years… But it was also his warmth and kindness that allowed him to enforce that credo without ruffling the sometimes delicate sensibilities of some of Buffalo’s biggest radio stars. It all made for a backbone that allowed the stations personalities shine even brighter.

Bill McKibben spent a career as a trailblazer. As General Manager at WGR Radio in the mid 60’s, he helped develop the city’s first news/talk format, a quarter century before talk would revolutionize AM Radio. When he and some investors purchased WEBR Radio in the 70s, they put Buffalo’s First Oldies Format on the air… Again a decade before a full-time Oldies became widely accepted.

Between assignments at WGR and WEBR, McKibben modernized the WBEN properties… Both Radio and Channel 4. While the Buffalo Evening News had been a pioneer in putting the stations on the air, they hadn’t done much by the mid-60’s to compete in the market. McKibben brought in viewer and listener research, and helped turn around a franchise that was on the precipice of abyss. It was Bill’s idea, for example, to move Chuck Healy to the news desk from sports, which helped ratings soar.

Known as a tough management negotiator despite having grown up in a union home, most who worked with Bill agree that he always made every attempt to hire the best, and then let them do their job unfettered.

Since 1964, when he was traded to the Bills, Paul Maguire has been a Buffalonian. Since his retirement from football in 1970, Maguire has used his suburban Buffalo home as the home base for a sports broadcasting career that is incredible if only based on its 35 year longevity.

The fact that he never softens the edges, added to his feistiness and humor have always meant that his Color Commentary has certainly offers more “color” than any other Analyst in football. A “lunch bucket” player and a “lunch bucket” broadcaster has made “lunch bucket” Buffalo proud to call him “One of us” for over 40 years.

A smart, interesting friend on the radio. In that regard, Jim Santella is like many other great disc jockeys over the years… He’s someone who has transcended the microphone and speaker to make the listener feel like they were having a real conversation.

What continues to set Jim apart is his soft-spoken approach mixed with a strong, yet somehow universally appealing, sense of social awareness. As the voice and leader of Progressive radio in Buffalo for parts of three decades at stations like WYSL-FM, WPHD-FM, WGRQ-FM, WZIR-FM, and WUWU-FM, Santella lead the rebellion against playlist conformity and management meddling. It more than once forced him up or down the dial, but people followed.

Agree with him or not; like the music or not, a certain magnetism draws you in to a Santella broadcast. It was a style that helped shape, and continues to shape, the sound of FM radio in Buffalo.

We always welcome new members to the Buffalo Broadcasters. It’s our mission to preserve and promote Western New York’s rich TV and radio history, and to salute and bring attention to quality broadcasting of today. Membership is $30, and anyone with a passion for broadcasting can join as a member. It’s just as easy to join us in celebrating this year’s honorees.

Tickets to our Hall of Fame event are available to general public at $50 per person, and $40 for members. Send your ticket order or membership request with payment to:
The Buffalo Broadcast Pioneers
5672 Main Street
Williamsville, NY 14221

Steve Cichon is a Past President of the Buffalo Broadcasters, and currently serves on the group’s Board of Directors. He’s also a news anchor and reporter for WBEN Radio, and is webmaster at staffannouncer.com, a website celebrating broadcasting history.