Beyonce. Bono. Cher. Some personalities are so renowned and celebrated just one name will do.  Such is Buffalo’s Danny. 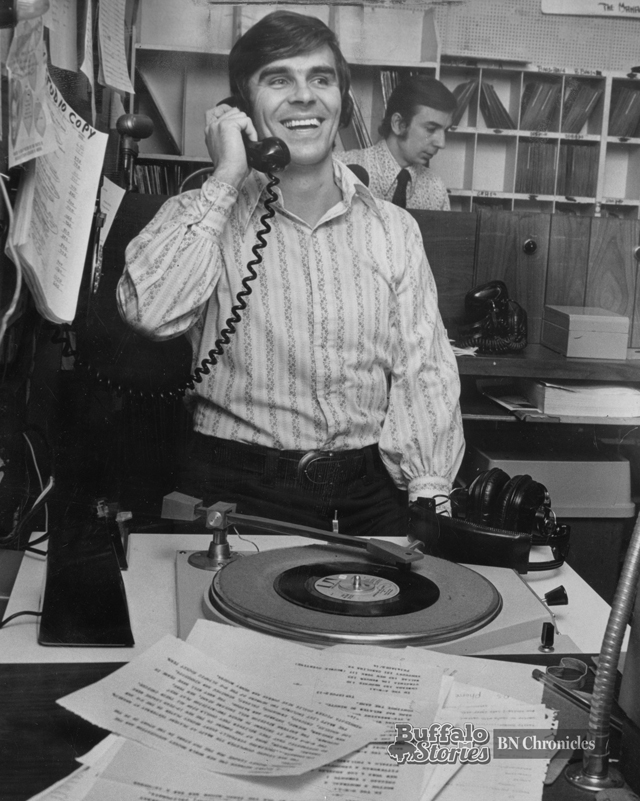 Pictured here in the studios of WKBW on Main Street with newsman John Zach in 1972, Danny Neaverth is perhaps Buffalo’s greatest pop culture star. He’s remembered most for peeking at us through the hole in the record behind the microphones of upstart WBNY radio in the 1950s as Daffy Dan, then WGR Radio, and then 25 years at WKBW Radio — with most of those years as Buffalo’s morning man. Tag on a dozen more years at WHTT, and a few more at KB again, and Danny moved our fannies on the radio for half a century.

But it wasn’t just radio — Neaverth was also a TV weatherman on Channel 7 and later Channel 2. He was the public address announcer for the NBA Braves and the NFL Bills.  A few of his moonlighting gigs dovetailed more closely with his work as a disc jockey and radio host. He was a concert promoter and recording artist (who could forget “Rats in My Room,” even if they tried?). Of course, his face and voice were everywhere for Bells Supermarkets and dozens of other Western New York businesses through the years. His work in the community for dozens of causes and charities over the last 60 years has been unmatched.

In the ’70s and ’80s, it was difficult to spend a day in Buffalo and not somehow be graced by the voice, smile and personality of “Clean Dan Neaverth,” a true Buffalonian who never forgot his Seneca Street South Buffalo roots and proudly plied his trade among fellow Buffalonians proud to call him one of us.

Buffalo Morning Radio around the dial in 1989

The scary sounds of Halloween on WKBW: 5 hours worth of K-Big talent on display

Ten years without the I-190 tolls