BUFFALO, NY – It’s funny the way memories begin to haze. Strictly from a Buffalo point of view, in the late 50’s and early 60’s, KB was one of many stations cranking out the music and antics that made for great rock n’ roll radio.

Stations like WBNY, WWOL, WXRA, and later WYSL and a host of others were capturing the imaginations of young people in Buffalo. Tommy Shannon first made girls swoon at WXRA Radio, from a location way out in the boonies. The studio was on rural Niagara Falls Boulevard, in a location which soon would be the home of Swiss Chalet for the next 50 years. WXRA later became WINE, where Hernando played host.

Tom Clay, one of many disc jockeys to use the name Guy King on WWOL, was arrested after his playing ‘Rock Around the Clock’ over and over again, while perched atop a billboard in Shelton Square. Traffic was snarled for hours in what was considered “Buffalo’s Times Square,” and is now just considered the MetroRail tracks in front of the Main Place Mall.

If you tuned to WBNY in the late 50s, you were likely to hear the voice of Daffy Dan Neaverth, Joey Reynolds (right), Fred Klestine and Henry Brach. At WBNY, Neaverth would pull a rooftop like event similar to Guy King’s, throwing candy out to passersby. Neaverth, perhaps with his boyish good looks and demeanor, evaded arrest for his stunt. 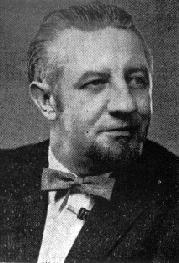 As many of the smaller stations in Buffalo were churning out rhythm and blues music all day, at night, for Buffalo and the entire eastern seaboard, ‘the Hound Sound was around.’

George “Hound Dog” Lorenz, the Godfather of rock n’ roll radio (not just in Buffalo, but PERIOD) first plied his trade in Western New York at Niagara Falls’ WJJL, as early as 1951. By the mid 50’s, Lorenz’s hip daddy style, and the fact that he was spinning records from black artists, made him an institution.

Ironically, the man who brought Elvis to Memorial Auditorium was out at KB when the station went Rock n’ Roll full-time. Lorenz wanted nothing to do with a Top 40 style format. While inspiring many of the changes that came to KB and many other stations around the country, the Hound stayed true to his style, and founded WBLK Radio; where he continued to uncover and spotlight new artists, both in Buffalo, and to a syndicated audience around the country.

Despite a pioneering spirit and great imaginative programming, each of those true rock n’roll pioneer stations had unique problems. Either they weren’t well financed, or had daytime-only signals so weak that they couldn’t be heard throughout the city and all the nearby suburbs.

Enter WKBW Radio, soon with the corporate backing of owner Capital Cities (now THE DISNEY CORPORATION, by the way), and its monstrous 50,000 watt signal. With an eventual 50% of the marketshare, KB quickly blew all of the much smaller competitors out of the water. Half of the audience was listening to KB. Never before, and never since, has a radio station been so dominant in Buffalo.

On July 4, 1958, Futursonic Radio was alive on WKBW. The rock n’roll era had arrived on a respectable, long established Buffalo radio station. When station manager Al Anscombe first convinced the Reverend Clinton Churchill to make the switch to Top 40, initially, the station was stocked with out-of-towners at the direction of the man who’d established WBNY as the city’s Top 40 leader, program director Dick Lawrence.

But eventually, a base of homegrown talent sprinkled with some of the most talented people from around the country, KB built an unprecedented following in Buffalo and around the country. Most of the names already mentioned here made their way to KB, and many reading this might not know or remember they worked elsewhere.

As often happens, over the last 50 years, for better or for worse, people who remember Guy King or the earliest Tom Shannon or Daffy Dan Neaverth shows, will think they heard those things on KB, forgetting those early pioneering rock n’roll days. If you watched Elvis shake his hips on Ed Sullivan for the first time, and you then listened to Elvis on the radio– It wasn’t likely KB, even though your memory might tell you otherwise.

Many who played a part in making those smaller stations great feel slighted by the fact that KB has swallowed up the collective memory of the early rock n’roll era; but it’s no slight on those great stations and the folks who worked there: It’s more a testament to the incredible juggernaut that KB was. Henry Ford didn’t invent the automobile, he was just the first to make the same car available to everyone.

With its clear-channel 50,000 watt signal, KB was heard all over the eastern half of North America. Anyone who worked at KB in its heyday has stories. The Joey Reynolds Show was a resounding Number 1 in Buffalo. But 370 miles away in Baltimore, the show showed up in the ratings as number 4. The late newsman Ed Little would remember being in the room as packages containing female lingerie were opened; sent from Maryland by an obviously big fan. Don Yearke, known as Don Keller the Farm Feller back in the early 60s on KB, was recognized along with his KB Litter Box by a fan in Southern Pennsylvania.

Starting in the mid 50s, and running through the mid 70s, its fair to say cumulatively, that nighttime KB disc jockeys like George “Hound Dog” Lorenz, Dick Biondi, Tommy Shannon, Jay Nelson, Joey Reynolds, Sandy Beach, and Jack Armstrong enjoyed more listeners on a single radio station during that clear-channel time in the evening, than any other station in the country.

For that reason, KB owns a special place not only in Buffalo’s pop cultural lexicon, but also for thousands and thousands of fans, who just like the ones in Buffalo, fell asleep with their transistor under their pillow, wondering where the hell Lackawanna was.

The proof is in a quick search of WKBW on your favorite search engine. People from all over the country, and not just Buffalo transplants, have built websites dedicated to keeping the memory of WKBW alive. It’s a part of Buffalo’s past of which we should all be proud.

Narrated by then-KB Radio newsman Irv Weinstein, this piece reflects the KB staff from it’s first year as a Top 40 station. It starts with The Perry Allen show, with an Irv Weinstein KB Pulsebeat Newscast… with some of the great writing and style Irv would become known for in Buffalo over the next 40 years. You’ll also hear from Russ Syracuse, Johnny Barrett, Art Roberts, and Dick Biondi.

The famous Jeff Kaye produced and narrated look at KB in 1971, with jocks Danny Neaverth, Jack Sheridan, Don Berns, Sandy Beach, Jack Armstrong, Bob McCrea, and Casey Piotrowski, with Kaye’s thoughts and insights on each in between. First appeared on album form from the industry periodical “Programmer’s Digest.”