What a week in family history.

As my mom, Olga, and her twin sister, Mary, related the family story to me about their dad’s arrival in the United States, the history unfolds thusly….John Cichon came from Poland on a ship that landed in Portland, Maine, and he entered the country through the Custom House (which still stands there today on Commercial Street. Wikipedia has a nice picture of it). Aunt Mary told me he was befriended on the ship by a Jewish man, who offered him garlic to ease the nausea of the voyage! In Maine, they were unable to find work, so they decided to go to Canada. From Toronto, John eventually made his way to Buffalo where there was a large Polish immigrant population. That’s the story as the Cichon twins told it.

The ship immigration manifests make it pretty clear that Jan was heading to the Niagara Region of Canada, and he pretty quickly made it down to Buffalo. By the 1915 New York State Census was taken, he was living a block away from what would become the family homestead on Fulton Street. He was single on the boat, married to Mary in the 1915 census.

Also interesting, on the boat, Jan Cichon traveled with Maciej Korona, from the village of Zawierzbe, only a few miles from his home in Milczany. In 1915, John Cichon had a boarder named Martin Korona at 43 Van Rensselaer St. The census document shows both men had been in the country for two years. While not certain, it looks like these two stuck together from Poland to Germany, where the boat left from, and then on to Maine. Then from Maine through Ontario, and into Buffalo. Martin Korona (sometimes Mike) lived with his wife Sally on Oneida Street on Buffalo’s East Side into the 1940s.

Armed with all this new information, I asked a friend for some ideas for a next move. He sent me to a wonderful East Side genealogist, who sent me a big long list of places to research around town and maybe pump some more information out of resources that I’d been using all along.

One idea was the to go back and double check marriage license lists at the downtown library. Now I had searched several times for a Jan Cichon/ Mary Pochec wedding. I had even paid the city clerk’s office to run a check for me, and called several churches where the wedding might have happened. I wasn’t confident, but went through the library materials again with a fine-tooth comb.

In casting a wider net, I hauled in the fish I’d been chasing for a long, long time. John and Mary Cichon were married August 19, 1914 by Fr. Peter Pitass. A quick web search shows that Fr. Pitass, the nephew of the founder of St. Stanislaus Church, was at that time, the pastor of Holy Apostles Ss Peter and Paul Church, on the corner of Clinton and Smith.

What made this marriage certificate so hard to find? First, the groom was listed as Jan Cikon, a misspelling, no doubt. He’s listed as 21, from Russia (Poland was split between Germans and Russia then), a laborer, and living on Fulton Street. Sounds perfect. The bride’s first name is listed as Maryjana. My great Aunt Mary said that her first name was Marianna in the old country. Great. From Russia, 21 years old. Dead on. Everything on the certificate, even the nearby church, is perfect, except one whopper.

The problem comes with her last name. Pochec is Mary’s maiden name according to all family knowledge. It’s listed that way in her Buffalo News death notice. John Cichon’s bride that day, however, was listed as Mary Ganaboska.

I’ve always felt there was something fishy about my great-grandmother’s background. She completely disappears before 1914, under the name Pochec or Ganaboska (or any close spelling variants of those two.) No ship manifests, no immigration lists, no address for the time she lived here before meeting her future husband. (UPDATE: More has been found on Babcia Cichon… More to come.)

The marriage license says she did shop work, and lived at 1013 Broadway before getting married. The Broadway Market is 999 Broadway. She lived literally next door to the market.

That is, of course, if any of this is true. I’ll have to do some more research to see what I can find as far as how Mary lists her name on other legal and church documents, like her older children’s birth and baptism certificates, and maybe the death certificate of son Czeczlaw, who died at only a few months old.

I have a few theories about why all the secrets, but I’d like to research them each a bit more.

The other great part of doing this research early Saturday morning, was going to the downtown library, and running into my great uncle Pat. He’s my Grandpa Coyle’s brother. Talking to him was eerie, because not only does he look like my grandpa and have many of the same facial characteristics, the cadence of his speech and the way he talks is very similar. 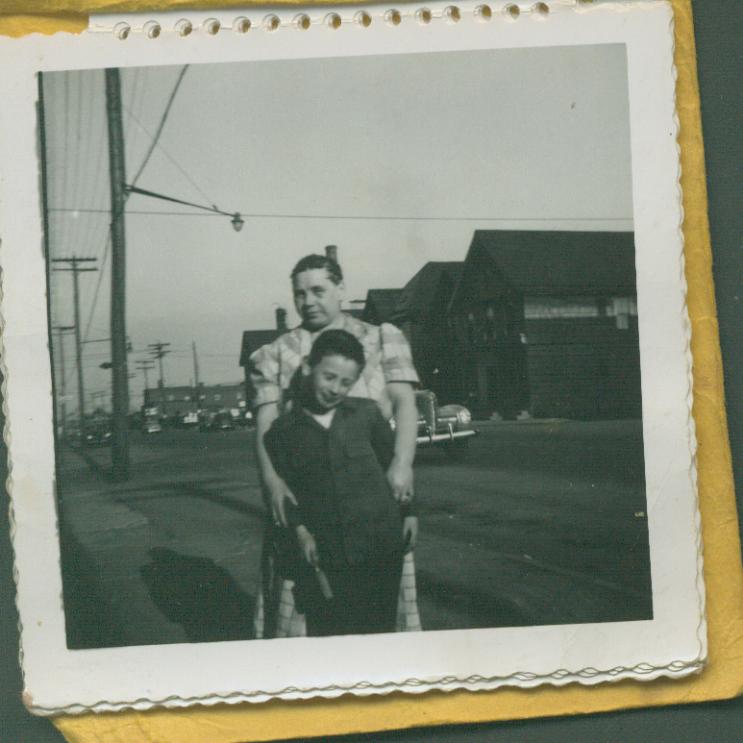 Uncle Pat was doing family research there, too, and we exchanged e-mail addresses to share some of the information we have with one another. I’m very excited to have sent him copies of scans I made a long time ago, of some of my grandfather’s snapshots. Here’s a photo of Uncle Pat and my great Grandmother standing on Elk Street in the late 40s or early 50s. I’m sure he’ll enjoy this photo (right) he hasn’t likely seen in 60 years… of him with his mother, who died 35 years ago.