BUFFALO, NY – Since I can’t find the appropriate venue in which to ask these questions, I’ll ask them here– and ask people to share this around so that I might get some answers for my family and me.

In 1973, my father, an E-4, was honorably discharged from the USMC after 3 years 4 months 20 days of service because of physical disability. He spent time stationed in Camp Lejeune, Cuba, Panama, Okinawa and finally, Walter Reed before going home.

My dad always said he had three ribbons on his uniform as a Marine. His official transcript lists only The National Service Medal– but it also shows he qualified for the Good Conduct medal which wasn’t listed (It was one Dad said he got– but they just gave everyone who hung around long enough.)

The third one is a bit of a mystery. He talked about receiving some decoration after Nuclear/ Biological/ Chemical Warfare School (or maybe for some use of that training). The schooling is listed, but the award isn’t.

Anyone know someone who might know these answers if you don’t? Internet research is vague and non-specific here, especially since I’m not entirely sure what I’m asking.

I’m also quite positive that “official channels” won’t offer many answers– I’d just like to ask these questions of someone who might have a good idea of what the truth is, regardless of the form that was filled out hastily and improperly 42 years ago.

Dad’s DD-214 is clearly incomplete– all he left the Marines with was the uniform on his back. All of his belongings were stolen when he was transferred from a base hospital to Walter Reed, from where he was honorably discharged. Because he was sick, he was never given the chance to review or sign his separation papers.

This is all to say, he never bothered trying to amend his records because he had no proof. His paperwork and medals were stolen with his camera, stereo, 8-tracks, and uniforms.

I’m not looking to amend his records– just for the ability to pay proper respect to his military service, and remember him for the commendations he actually received. 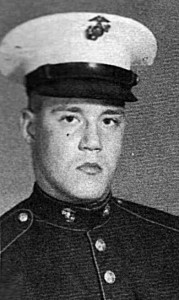 The few photos of him during his time in the Marine Corps don’t show him in regulation uniform— except his boot camp dress blues head shot, which was taken before any of the awards would have been earned.

He was proud of serving his country, but like many who did so, he didn’t like to talk about it much. I wish I had pressed a tiny bit more or taken better notes through the years.

Please feel free to email me with any insight– steve@buffalostories.com. Thanks.