As I write this, I wonder how much of my bizarre personality can be attributed to the late great Ernie Coombs, known to Canadian Children (and those like me just over the border) as Mr. Dressup.

The daily half hour filled with drawing, creating cool stuff out of things that I had laying around the house, Dressing up in costumes, and using funny voices always set my imagination into motion.

This is me at the CBC museum… Just inches away from the tickle truck. My wife and I were also able to visit Mr. Dressup’s drawing easel, and Casey’s tree house (as well as The Friendly Giant’s castle). 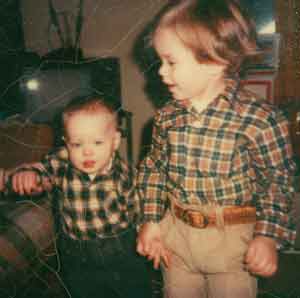 Mr. Dressup was a 10:30 appointment for most of my childhood. My brother Greg and I would stop fighting the moment we heard the piano open on the show (this picture is of us Xmas ’79).

And we’d sit together on a big chair and be quiet for the half hour. My sister Lynne soon joined our love for Mr. Dressup too.

In true Mr. Dressup fashion, the Cichon kids made our very own Tickle trunk… We drew flowers on an empty beer case box, and stored our dress up gear in it. It seemed that just about every other day, the show ended with either Mr. Dressup or Casey asking about lunch… which then made us start bothering my mom about lunch, too.

Included here are some stills from the Mr. Dressup special that aired on CBC after his death in 2001, as well as some from a Casey and Finnegan episode that I taped in the late 80s or early 90s.

I’m glad that even after his death Mr. Dressup lives on every day on TV (even if without Casey and Finnegan.) It’s the finest kids show I’ve ever seen. It’s fun and spurs kids to be creative and think… without being preachy.