BUFFALO, NY – It’s one of those opinionated days, and all of my opinions are on my friend Larry Felser today. Larry used to weave silly observations into gold in columns that started this way. I’m just writing down a bunch of memories of my old pal and sharing some great audio clips. 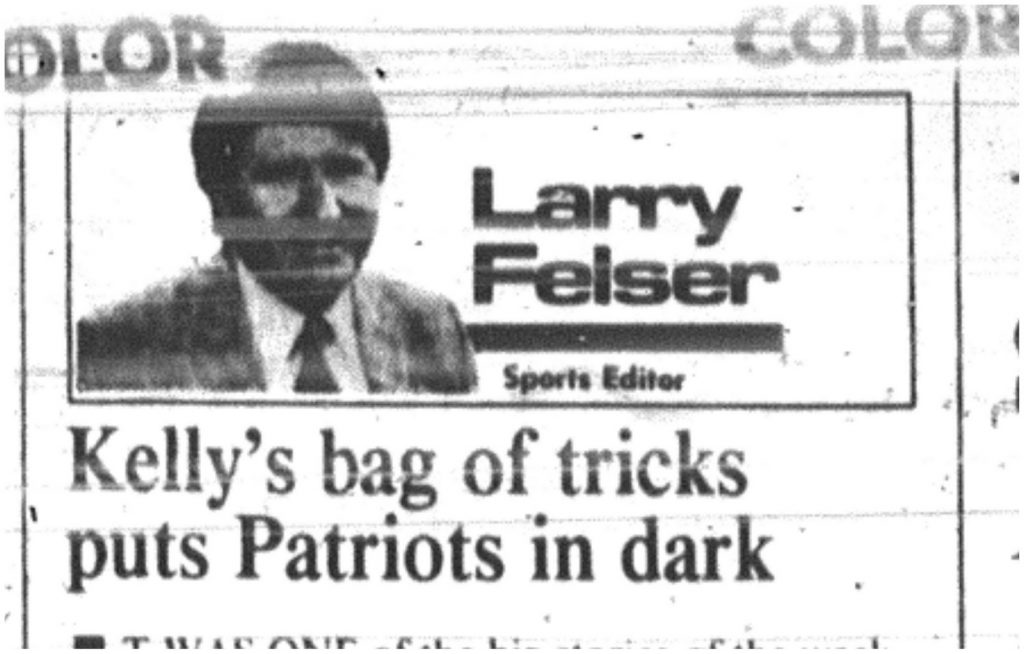 For about a decade, I got paid to hang out with Larry Felser on Mondays for an hour. I produced his radio shows on WBEN and WNSA Radio. Larry was one of those special guys who was able to move comfortably among millionaire athletes and sports owners, and just as easily among 16 year old kids who worked in radio and loved hearing his stories. Well, at least this 16 year old kid.

My friendship was cemented with Larry the day his car broken down a few blocks from the station in the middle of the Elmwood/Hertel intersection. He called from a payphone saying he’d be late, so I drove down there, let him take my car to the station, and waited for Triple-A with his car. He mentioned that all the time, never forgot it. I think he may have even mentioned it the last time we spoke.

He was like that. Those were the kinds of stories he’d tell you about people. He could sum up a Hall of Famer by describing the time he had breakfast with him in a hotel lobby.

To know Larry Felser was to know the heyday of print journalism. He was a Buffalonian in the way we used to mean it. He was the smartest, best mannered lunch bucket guy, but he knew he was no better than the kid he went to Canisius with, who was working at the mill. And while Larry wasn’t throwing around 100 pound bags of feed, he was one of the hardest working guys I ever met. Even after he was “retired” from The News.

“Now here’s a guy….” as Larry would say, who just loved to talk and listen. Larry is the only person I’ve ever met who I could imagine, 1940’s movie style, get on the phone, and tell an editor, “Stop the presses! Have I got a Cracker Jack story for you!” He had that gutty old school newspaper man feel about him, even though he was at least a generation removed from working in that old, old school environment.

“Fast as wood.” It was fast as wood, or skates like wood… This phrase was written by Larry about Dave Andreychuk, I believe. But I know for a fact it was one of Jim Kelley (the hockey writer)’s all-time favorite line, and as he repeated it so often, it’s become a favorite line among those of us who loved both Jim and Larry… namely Randy Bushover, John Demerle, and me.

Larry was one of the best storytellers around. His delivery was plodding, but he made up for it with his keen and scathing observation skills, and his ability to turn a phrase. The best stories, of course, came during the commercial breaks. I don’t remember what precipitated it, but one day Larry went on the most wonderful, colorful, captivating description of how he used to sneak off to “The Palace Burlesk,” and give a very vivid diatribe about why “Rosie La Rose” was the favorite dancer of him and his friends.

I remember word for word the 1940s slang phraseology used in that discussion of Ms. La Rose, and supplemental offerings she’d provide above and beyond the other entertainers at The Palace. For Larry’s sake, I’ll keep it to myself right now, but I’ll never forget it. In fact, I use the line often. In 1945, it was almost certainly vulgar. Today, it simply makes people laugh.

Another line I heard Larry say often, one which I almost always credit him when I use it.. “My most creative moments in front of a keyboard are when I write my expense accounts.”

Toward the end of his career at the News, he grew a full beard. The line I heard him use on more than one occasion… “When I started growing the beard, I was going for Hemingway. It’s come out more like Box Car Willie.” He had the beard for quite a while before The News updated his photo.

One year, he gave me a book for Christmas, and told me that if I wanted to be able to picture what football used to be like in Buffalo in the 40s, that it was just like this book. I’ve read this book about the Baltimore Colts and their fans about 10 times. I wish I asked Larry which other books I should read. 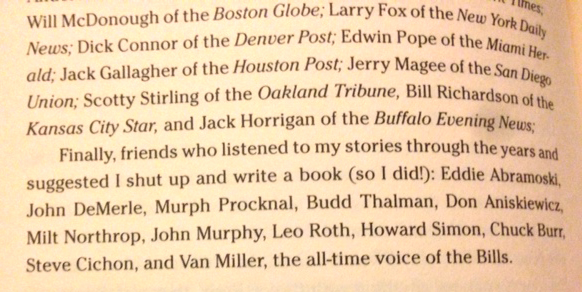 I was just thunderstruck, and to this day, I don’t know what to say. While he has the ear of most of the most important people in sports; that Larry even knew the name of some chump kid from a radio station really shows something about the man. That he’d memorialize our friendship on the same page that he did with Lamar Hunt and Will McDonough is still beyond comprehension to me.

But Larry is beyond comprehension to me. I’m better at an awful lot of things for just having been in his presence. Thanks, Larry.