For sure, in life, the cards don’t always dance at the end. So is solitaire really so hard and frustrating that we need to play with the “winning deal” option?

I was terribly, actually mad when I realized that the setting on the solitaire game on my iPad was changed (probably during a software update) to “winning deal” instead of “random deal.” 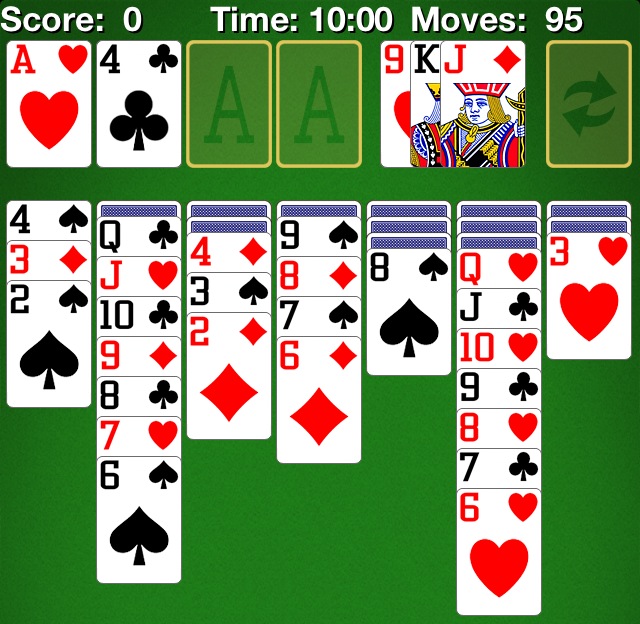 Solitaire can be a boring and mind numbing game, but I like to play as if there is something real at stake. Nothing specific, but something important. Even if my score is down to zero, I keep going until there’s absolutely no way for me to solve the puzzle. Move cards from the top piles back down to the stacks to be able to move over that 4 with three cards underneath it. Go through the pile of flip cards an extra time.

Of course, even with all the effort, about half the time, I lose.

But losing is a part of the game. Its not that I don’t always want a win any less, its just that sometimes, a win isn’t in the cards. You do everything you can, and you lose a lot. As often as you win.

For me, a hard fought loss is always an inspiration to hit shuffle immediately and keep on playing until those cards dance across the screen. When you’ve lost two or three or seven games in a row, and you really should be going to bed, or getting back to work… Man, those dancing cards are great.

It’s a completely different mentality when your dealt a hand you know you can win. It’s boring. The thrill of “I’m going to try everything, because I don’t know what’s under that 4” is replaced with, “c’mon, idiot. Why can’t I get this.”

In the end, the temptation is to hit that help button to see where you went wrong, and to see the cards dance, even if you didn’t really earn it all yourself.

But you know what? If I’ve just done the best I can, worked on the game til I felt like I couldn’t work on it anymore, and decided I had to stop because there was no where else to go, I don’t think I want to know where I screwed up.I certainly dont want the big card locomotion party for all my hard work.

I know all the rules of solitaire inside and out. Been playing it for years. Even with actual real cards back in the old days, sometimes with cards missing… Talk about NEVER WINNING!

I accept that sometimes I’m going to lose, and I often enjoy a hard fought loss. I don’t know that I’d enjoy solitaire so much with the burden and expectation of winning on my shoulders every time.

Don’t hit the “always win” button. Life’s experiences are greater when you take a chance on losing.