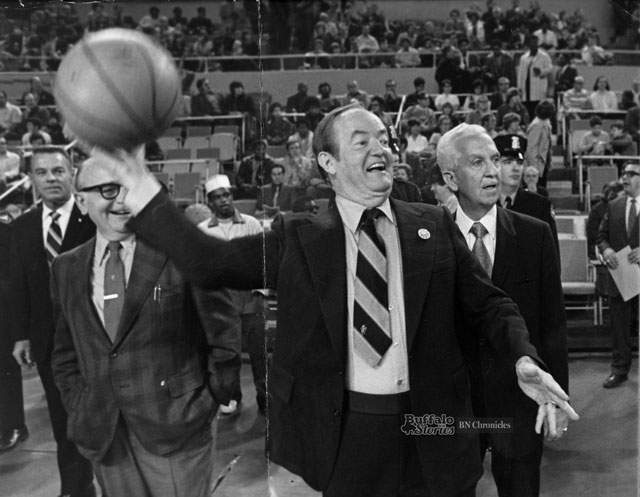 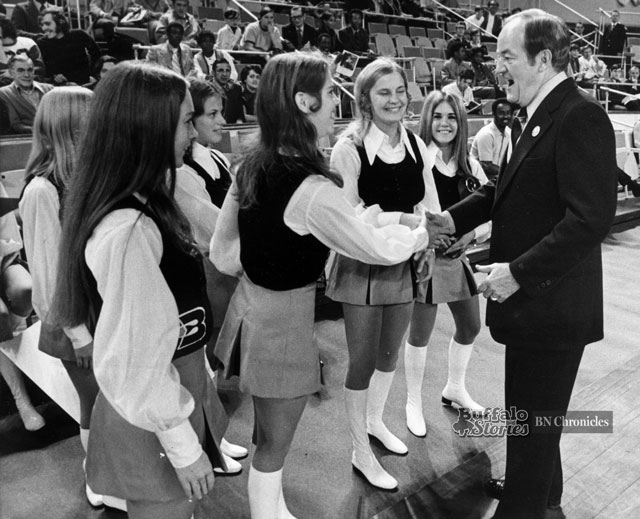 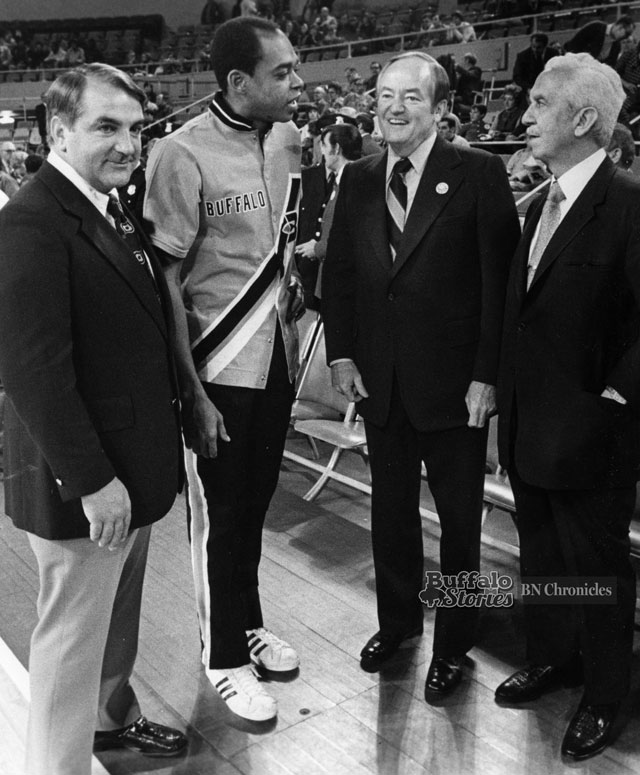 When the Cleveland Cavaliers beat the Golden State Warriors to win the NBA Championship in Oakland’s Oracle Arena a few weeks ago, the scene looked every bit the part that modern sports fans would expect of the multi-billion-dollar NBA of 2016. 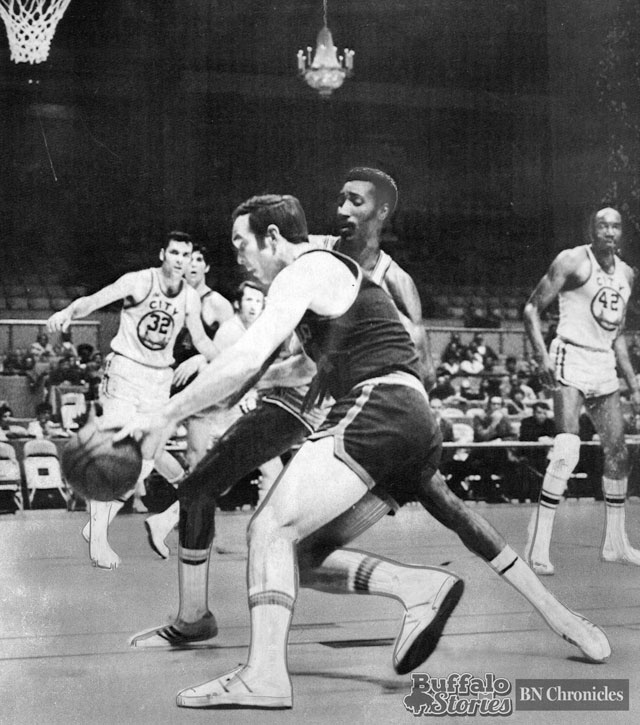 When the Buffalo Braves traveled to the Bay Area to play the San Francisco Warriors in 1970, the home court at the Cow Palace—built as an agriculture and livestock pavilion—was lit, in part, by Liberace-looking chandeliers.

The photo shows Mike Silliman of the Braves trying to drive past the Warriors’ Joe Ellis as future Hall of Famers Nate Thurmond and Jerry Lucas look on. The Warriors beat the expansion Braves 123-108 under the light of that candelabra fixture. 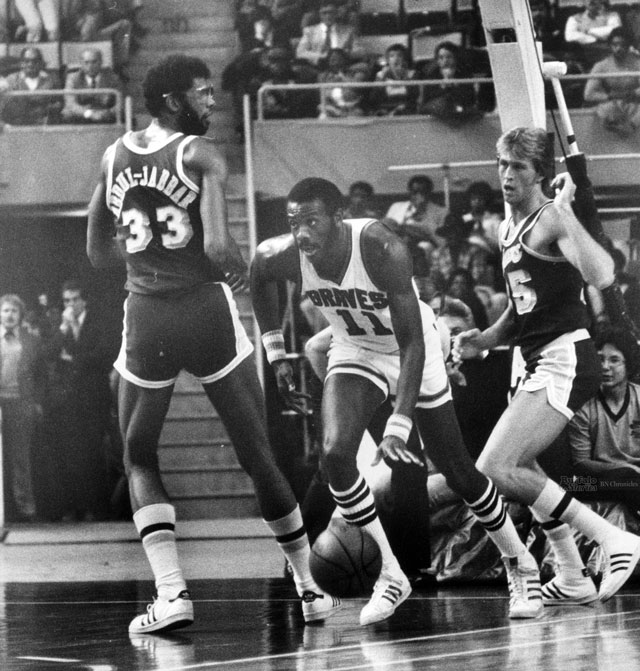 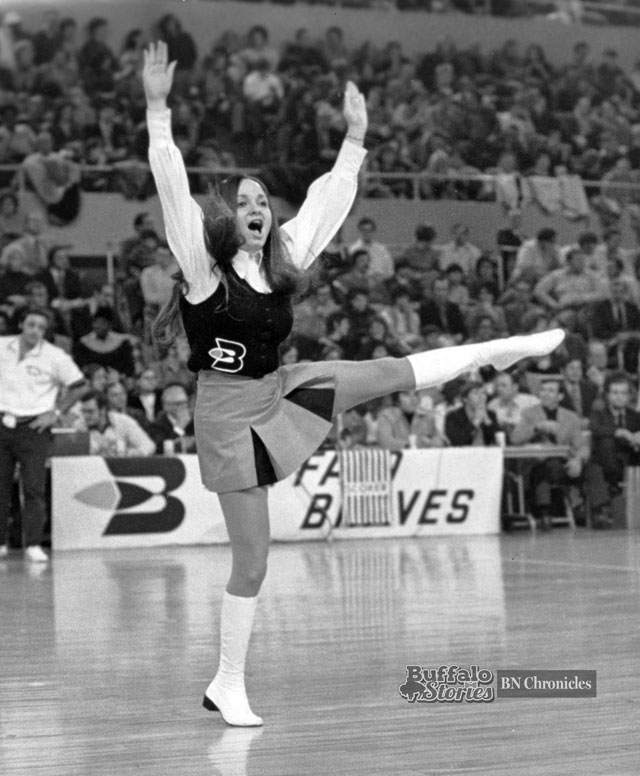 We can’t be sure exactly what the cheer was at the moment News Photographer Robert L. Smith snapped this photo, but the scorer’s table at Memorial Auditorium didn’t seem too impressed.

Fans in the Gold and Red seats, however, seemed to be paying closer attention. 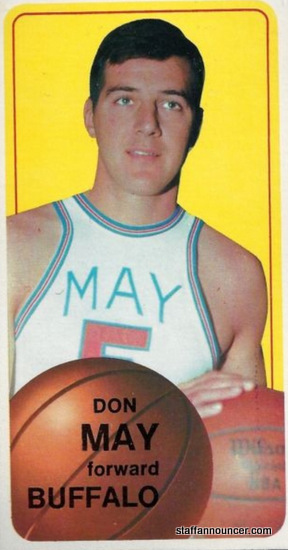 These cards are “tall boys,” which is good news if you’re talking about Old Milwaukee, but just looks dumb for a sports card. When Topps jumped back into basketball cards in 69-70, they decided that longer cards– to mirror the stretch physiques of basketball players– might make them more interesting.

Also, the outfits are weird. Legend says a clause in the players’ union contract said that players couldn’t profit from images of themselves wearing the team name or logo.

The solution is one of the dumbest things I’ve ever seen. Players wore their jerseys backwards. Or their shoot-around warmup gear (sometimes backwards.) Or they wore plain jerseys. Or they wore white t-shirts.

The team name does not appear on cards, either. Just Boston, no Celtics. Just Baltimore, no Bullets. Just Cincinnati, no Royals.

My interest in these very odd offerings is in the first basketball cards marked Buffalo (but not Braves.) 1970-71 was the year the NHL and the NBA expanded to include Buffalo, and that makes the cards only weirder for Buffalonians.

Dick Garrett, coming off a rookie of the performance for the Lakers before being taken by the Braves in the expansion draft, is wearing a crisp white t-shirt.

But perhaps the worst sports card of all time has bothered and intrigued me since I bought it for 25¢ almost 30 years ago.

Nate Bowman played one season for the Buffalo Braves. He came here from the 69-70 champion Knicks, but you already knew that, because he’s wearing a backwards Knicks shirt.

While you’re looking at that shirt, look at the armpit on the right side of the card. It might be easier to be judgmental about terrible photo edits in this modern day where Photoshop flawlessly fixes anything, but holy freakin’ cow. Half of dude’s torso is missing.

It looks a lot like the guy who was editing the cards was working on this one right before lunch, and when he came back, he accidentally put it on the done pile.

How could someone only give a guy half an armpit and think that’s ok?

This story originally appeared at TrendingBuffalo.com 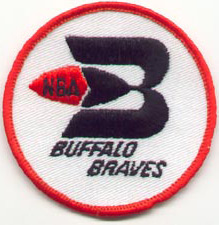 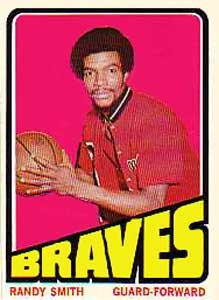 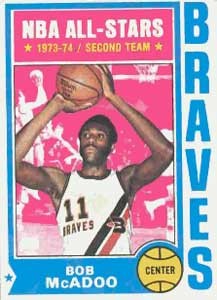