The City of Tonawanda has been home to several breweries since farmers began growing hops along the Niagara Frontier around 1810.

The Tonawandas’ most famous beer factory was at 533 Niagara St. at the corner of Hinds Street.

First opened by George Zent in 1867, the place was also known as Busch Brewing Co. – unrelated to the current discount-priced national brand. The old wooden beerworks, by then owned by Bernhard Voelcker, burned to the ground on the spot in 1913.

Voelcker rebuilt, and the new brewery building eventually sold to Buffalo’s brewer mayor Frank X. Schwab, who was selling a low alcohol, near-beer concoction named “Schwab’s Ambrosia” and home-brewing kits from the location at the start of the Prohibition era.

Given that his grandfather was a brewer at another Tonawanda brewery, Leon Peuquet paid special attention to the brewery he could see and smell from his home. He grew up a few blocks away from the brewery on Adam Street and wrote about the pre-Prohibition days in the Tonawanda News in 1977.

I can still remember the pleasant odor of cooking malt wafted on the southwest breeze early in the morning. You could always tell when they were brewing.

Then there was the early morning sounds of the horses’ hoofs and the rolling wagon wheels as a load of kegs came down over the brick pavement on Adam Street.

No fewer than nine companies made beer at the location.

The Tonawanda Brewing Corp. began operating in the building after Prohibition was lifted in 1933, and a few years later, it became Frontier Brewery, selling Malz-Brau beer in and around Tonawanda.

Malz-Brau was very popular in the years between the end of Prohibition and the start of World War II. During the war, Frontier Brewery’s domestic production stopped abruptly as they signed a government contract to ship canned beer overseas for American troops.

After the war, Frontier’s Malz-Brau couldn’t regain its prewar sales, and the place went out of business not in a blaze of glory – but in a tsunami of suds.

In 1948, during the brewery’s final days, Frontier made national and international headlines with its novel approach to avoiding thousands of dollars in federal taxes on the beer they’d already brewed but had lost the state license to sell.

Tonawanda officials said the yeast would halt the bacterial action at the city sewage plant. So they couldn’t dump it in the sewer.

With the rushing waters of the Niagara only a few hundred feet away, they simply dumped 57,000 gallons of beer into the Niagara River.

The state Conservation Department granted permission and supervised the dumping. It was recognized that the carbon dioxide in that much beer could lead to killing fish and other wildlife in the water, but “since the river is so large, it was believed the concentration would not be large and therefore the fish not harmed,” said an Associated Press report that accompanied photos of the dumping in newspapers around the country.

It took two days to dump the 16 storage vats containing a total of 1,975 barrels of beer.

Shortly after the last drop of beer fell into the Niagara, Supersonic Chemical bought the building. In 1951, the building’s years as a brewery were ended with certainty as 18 two-ton steel vats were removed. Benline Manufacturing created a machine shop in the space.

The building was demolished in 1994, and a strip mall featuring a Wilson Farms was built in its place.

In 1949, The William Simon Brewing Company — makers of Simon Pure Beer — created a series of ads celebrating Buffalo, Buffalo’s industries, the men who work in those industries, and the products they make. 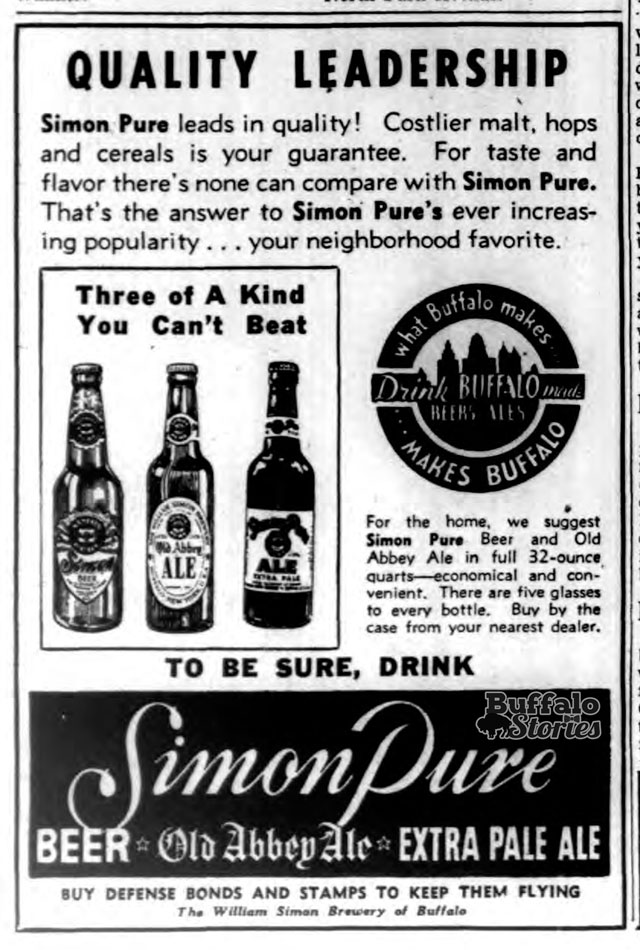 “What Buffalo makes… Makes Buffalo” was the slogan which surrounded the campaign. 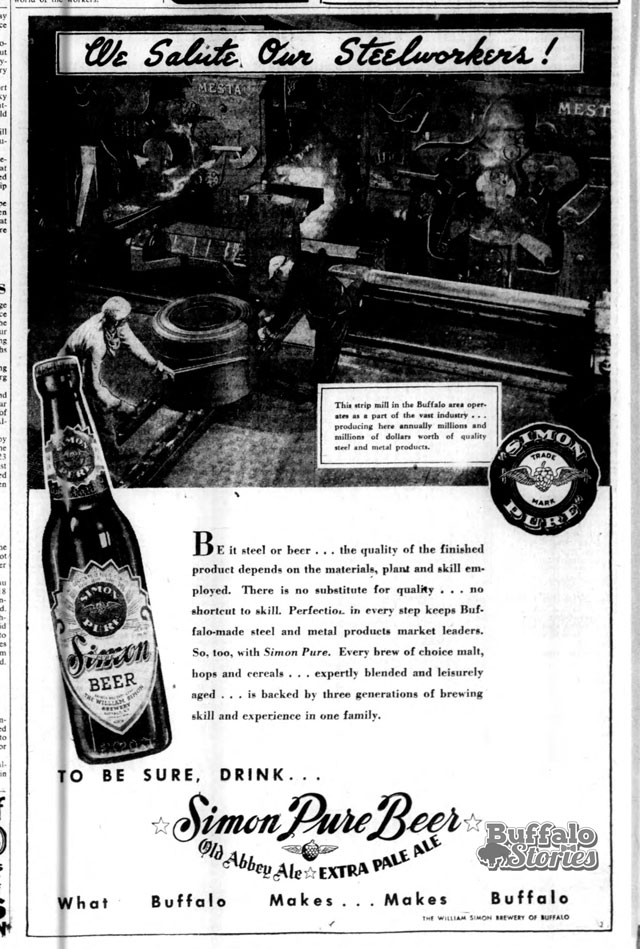 “Be it steel or beer,” the ad reads, “the quality of the finished product depends on the materials, plant, and skill employed.” The photo in the “we salute our steelworkers” ad shows an unidentified local strip mill. 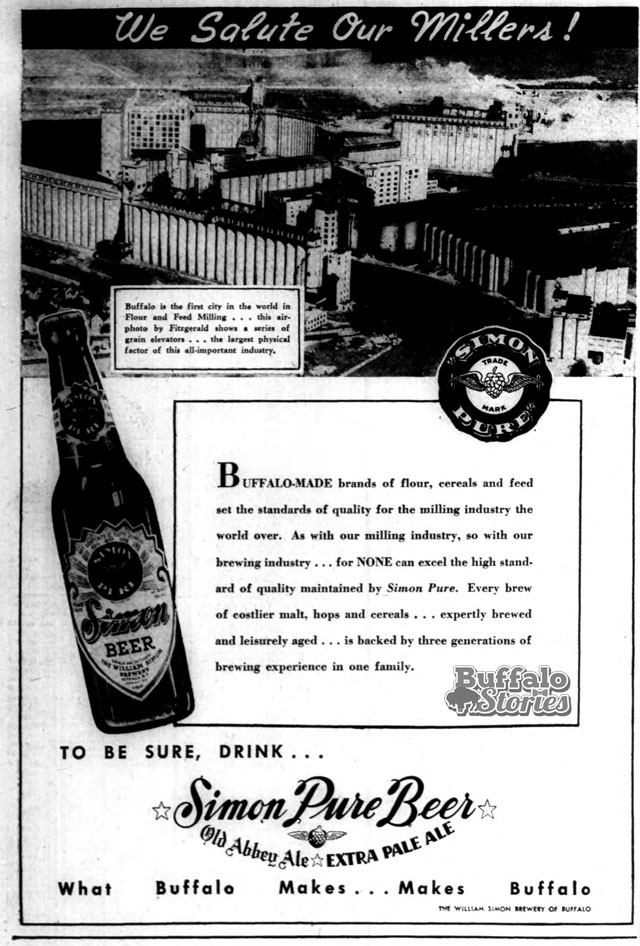 As Simon Pure saluted millers, they reminded readers that Buffalo was the first city in the world for flour and feed milling, showing a series of elevators along the Buffalo River. 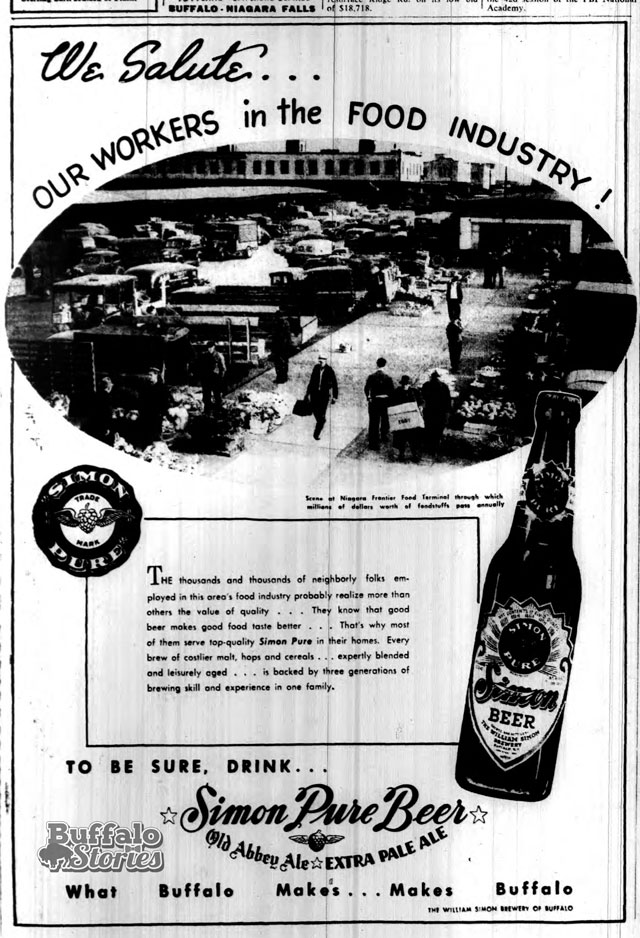 Food industry workers also were saluted with a photo of the Niagara Frontier Food Terminal on Bailey Avenue.

Of course, Buffalo also was a brewing center, with nine brewers listed in the 1950 City Directory, but the only Buffalo-made beer ever mentioned was Simon Pure. 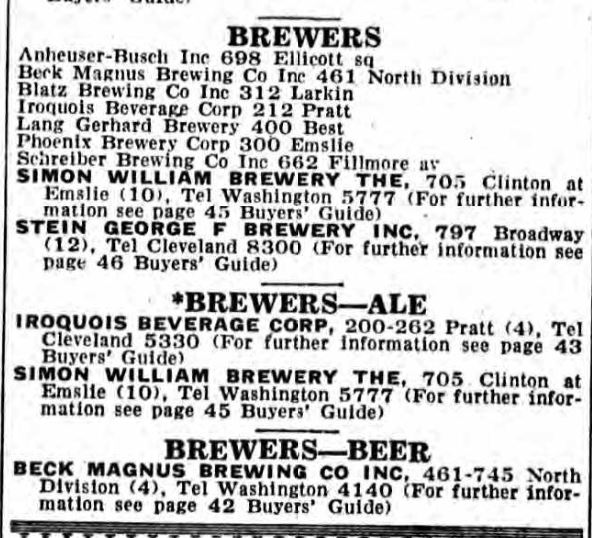 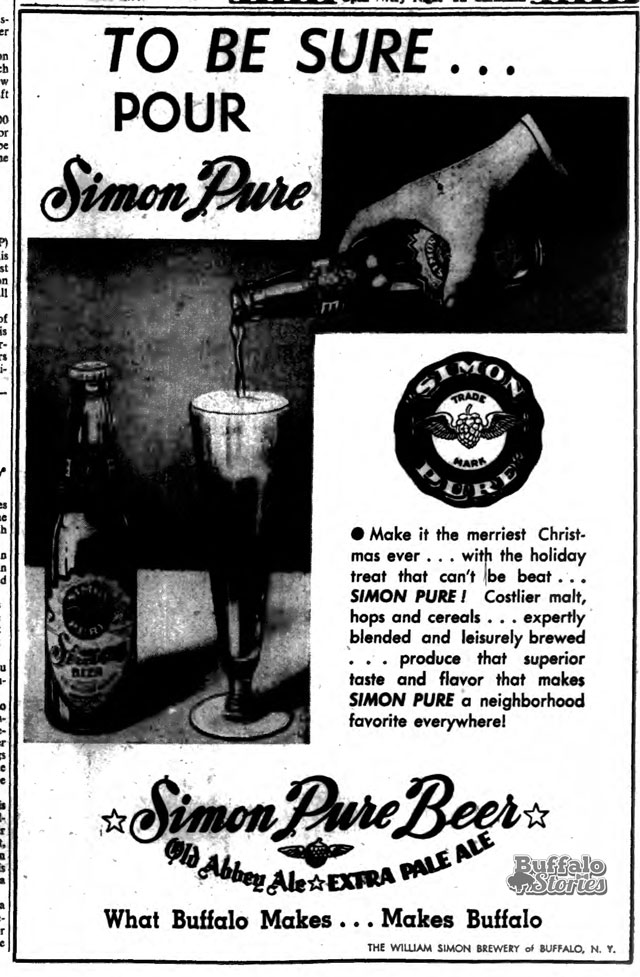