Through the 1850s, the numbers of German immigrants living along Broadway east of Jefferson Street rapidly increased to the point where it became the largest enclave of German citizens in Buffalo.

The Catholics among them built a small brick church in 1858 at Broadway and Emslie at the spot where St. Ann’s grammar school was eventually built. That small church was quickly outgrown, and plans were developed to build what would be one of Buffalo’s grandest churches at the time.

The Buffalo Commercial called the cornerstone laying of the current church in 1878 “one of the most extensive and imposing demonstrations of our Catholic fellow citizens ever seen in Buffalo.”

Mayor Solomon Scheu spoke in English, briefly addressing at least 20,000 uniformed men who had paraded from downtown to the foundation of the new church. A Jesuit priest addressed the crowd in German. He told these immigrants in their native tongue that they had plenty to be proud of as they made new lives in Western New York.

“It is not many years since a number of German Catholics settled on this place, the forerunners of that numerous class of sober and industrious citizens which today forms so large a proportion of the real wealth and prosperity of Buffalo.”

Bishop Stephen V. Ryan also made brief remarks, which were followed by the clergy in the group retiring to the hall at St. Ann’s School, “where a substantial German supper was disposed of in a hearty manner, and quite a toast was drunk to the new church of St. Ann.”

Because the pastor refused to go into debt to pay for the new church, the new building took eight years to complete. Hippier of New York created the plans for the Gothic building, which were carried out with modifications and supervision of Brother Halfmann, a Jesuit brother and architect.

The Jesuits leased a quarry in Lockport and all the stone was harvested and cut by members of the order.

The prosperous German community continued to grow, as did the parish. When St. Ann celebrated it’s 50th anniversary, it was the largest German Catholic parish in the country. There were 1,900 children at the parish grammar school at the time. St. Ann’s Commercial School, a business-oriented school for girls, eventually evolved into Bishop McMahon High School.

During that golden anniversary year of 1908, it was a matter of pride in being the largest German parish, but German pride would take a hit over the next decade. World War I brought an end to many of the traditional events and societies tied to Prussian heritage.

The German language as an integral part of parish life waned for that reason as well as the growing Polish community pushing into St. Ann’s parish from Broadway and Fillmore Avenue, and by World War II, St. Ann’s was as much a Polish parish as it was German.

The decades after World War II saw those German and Polish families leave the East Side, and the new predominately African-American families moving in were not looking for a Catholic church as a spiritual home. By the time the church was marked for closure, most of the parishioners who lived in the neighborhood were African immigrants.

Both neighborhood pressures as well as external larger issues within the Catholic Church, such as the dwindling numbers of priests, put targets on St. Ann’s for closure. A very vocal and energetic group of parishioners and supporters rallied for decades to keep the church open, but in 2011, a decision was made that the church was to be stripped of religious artifacts and put up for sale, and that decision went back and forth several times with appeals to the Vatican.

A final decision came from Rome in 2017.

“Now that the Vatican has ruled, the decision to close the church is final,” Bishop Malone said in a statement at the time. “We will do all that we can, within the confines of safety and feasibility, to remove all sacred and artistically significant artifacts.

“We hope to save the most significant elements of the Shrine of St. Ann for relocation,” he added. “We will announce its new home in the diocese in the coming months.”

Those who have spent decades trying to save St. Ann maintain a website at saintannbuffalo.org/.

Martin Gressmann came to Buffalo from Germany in 1893, and after two years as an apprentice, opened his own bakery at 1753 Genesee St., a couple blocks west of Bailey.

His business grew through his involvement in the surrounding tight-knit East Side German community. He was a member of civic and social groups like Maennerchor Bavaria and the Schuhplattler Verein and St. Gerard’s Roman Catholic Church.

He’d been a baker for more than 50 years when he died in 1946, and his daughters took over the shop.

Long after Gressmann’s death, people came from all over Western New York for what one Williamsville restaurant owner called Buffalo’s best coffee cake.

The pastry with the caramel topping originated in the shop remained in demand well into the 1970s.

Buffalo Police dealt with one of the worst traffic jams they’d ever seen as an estimated 50,000 people jammed Genesee Street near Genesee Park (now Schiller Park) for German Day in 1938.

Traffic was on the minds of the 50 officers on the detail in and around the park that day on foot, horseback and motorcycle – but it wasn’t their primary reason for being there.

“The large detail was ordered (the day before) when fears arose that there might be trouble when German swastika banners were permitted to fly alongside the Stars and Stripes,” reported the Courier-Express.

The swastika flags were flown in deference to Emil Pieper, German Consul for Western New York, who addressed the crowd. At a similar event in Rochester the week before, Pieper “stood in stiff Nazi salute when the band struck up the German National Anthem.”

The German Day celebration, held about five years into Adolf Hitler’s reign but a year before the start of World War II, had a representative of the Nazi government addressing tens of thousands of Buffalonians under the Nazi flag in the middle of a city park.

“Since 1933, many German-Americans have asked themselves, ‘What attitude should I take? How can I, as a German or German-American, best serve this country without giving up my German characteristics, of which I am unusually proud?’ ” asked Pieper.

He told the crowd that many German-Americans had lost their sense of direction, and that this event was a fitting time “to bring back to our memories the great deeds of our ancestors and the many contributions of the German element to American life.”

Pieper also told the crowd the best way to help Germany is by being good Americans. Pieper would stay in Buffalo and ran a travel agency specializing in tours of Europe through the postwar years and into the 1960s.

But back to 1938, Mayor Thomas L. Holling addressed the German Day group, speaking narrowly about the German-American contribution to Buffalo – not the goings-on in Europe where the stage was being set for what would become World War II.

“It’s good that sturdy German-Americans have helped us make Buffalo what it is today,” said Holling.

He added, perhaps to contrast Buffalo’s Germans with the Nazi Germans, that the Teutonic descendants of Western New York are a high caliber of people. “They are noted for their tolerant and sympathetic attitudes toward their fellow citizens.”

The area that is now seeing a resurgence as Buffalo’s Medical Campus was once a very densely populated center for brewing in the city. 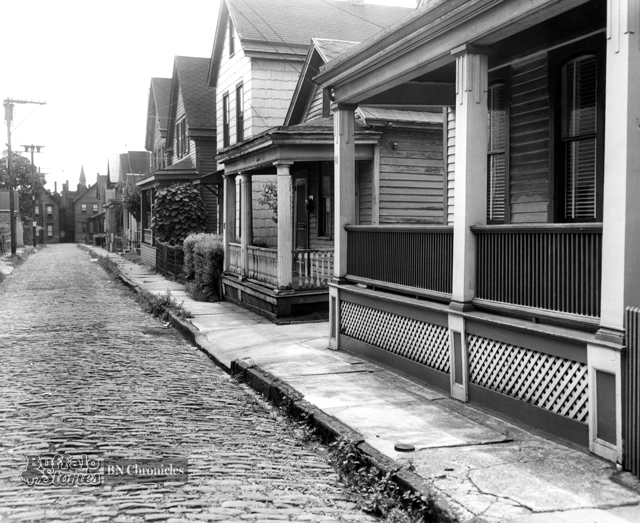 Ralph Alley, which was known as Ralph Street by the time this photo was taken in 1958, was one of a half-dozen or so alleys in what is now the Medical Campus footprint. 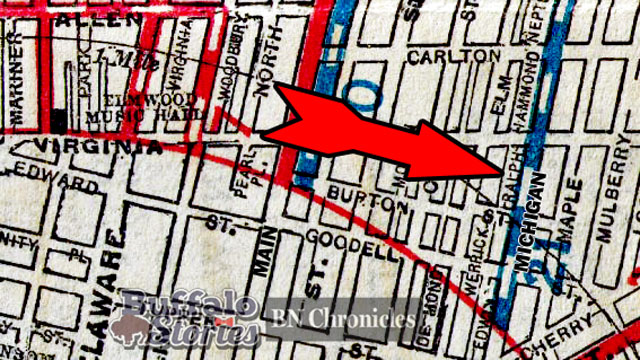 In the 1890s, hundreds of homes like these were filled with mostly German immigrants and the first generation Buffalonian children of German immigrants. Many of the men worked in the nearby Ziegele, Weyand, German-American, Empire, Star, and Buffalo Brewing breweries or associated businesses like Braner or Wiegand Malting.

As a part of urban renewal and the expansion of the Buffalo General Hospital and Roswell Park Cancer Institute in the 1950s and 1960s, most of the tightly packed alleyways in the area were simply wiped off the map.

What was once Neptune Alley (also known as Ketchum Street) now runs under RPCI. Swiveller (also known as Hammond) and Codlin Alleys were also abandoned in favor of the Roswell campus.