As late as the 1940s, newspaper stories written about Buffalo’s Italian population were painted with wild strokes of exotic color.

“Off in a section of the city where the rays of the sun, on a bright day, glisten down upon dilapidated housetops and seek their way into narrow streets and by-ways with which the place abounds, are colonized a people in whose native land the skies are the fairest and bluest, and where the very breezes are filled with invigorating fragrance.” – The opening paragraph of “The Italian Colony in Buffalo,” The Buffalo Courier, 1898

Sprinkled throughout 50 years’ worth of these newspaper accountings of how and why Italians came to and flourished in Buffalo, are the facts – and the colorful descriptions – which make up this story.

A handful of Genoese were the first Italians to make Buffalo their home.

When Luigi Chiesa set up his home and birdcage store at Elm and Broadway in the mid-1840s, he didn’t know any English, and there wasn’t anyone in town who knew any Italian. But he quickly became a Buffalo backer.

“Chiesa became a self-appointed immigration agent for Uncle Sam,” reported the Buffalo Express in 1901, “and in his letters to friends in Italy were importunings to this great country, ‘God’s Country.’ ”

His name means “church” in Italian, so not long after arriving in Buffalo, he became well-known among longtime city residents as Louis Church. But to the slowly trickling in numbers of Italians, he was still Luigi and his home was the first hub of Buffalo’s Italian community.

John Roffo was among the first Italians to settle in the neighborhood that would come to be known as Little Italy near today’s Canalside. After arriving in 1847, he was a wine merchant and grocer on Canal Street, then opened a tavern on Erie Street.

Louis Onetto, who owned a macaroni manufacturing works on Broadway near Michigan for more than 50 years, came to Buffalo in 1866.

Those early sons of Italy were northern Genoese, but in the decades to come, the massive numbers came from southern Italian places like Sicily and Naples.

“The Sicilians far outnumber the other Italians in Buffalo,” reported The Express. “They are the dark-skinned, raven-haired, black-eyed Italians who are most numerous on Buffalo’s streets. They are the manufacturers of macaroni, the fruit hucksters, and the bootblacks.”

“The Italian Moses who led the Sicilians to the promised land of Buffalo was Frank Baroni,” reported The Express. He came to Buffalo from Valledolmo, Sicily, in 1882 and immediately wrote home encouraging people to find their way to Buffalo.

“The great majority of the Italian colony,” reported The Express in 1908, “are of the peasant and laboring class.” But not all.

Among the first 42 to heed Baroni’s call from Sicily was a destitute boy, Charles Borzilleri. Eventually, he was the first Italian to graduate from UB Medical School and became prominent not only in the Italian community but in Buffalo at large. He founded Columbus Hospital on Niagara Street and also spent several terms as the president of the Erie County Medical Society.

Those Italians moving to Buffalo settled in one of the oldest parts of Buffalo, displacing the Irish enclave near the Erie Canal and Buffalo Harbor around Canal Street and the Terrace. What was the center of this neighborhood is today covered by the Marine Drive Apartments near Canalside.

“Hemming in on one side by the water’s edge, and intersected on the other by the ponderous traffic of a steam railway, the locality offers few inducements to those who would establish homes within the boundary lines of Buffalo,” reported The Courier in 1898.

That’s why through the 1890s, more Italians began moving onto the other side of the canal as well, into what we would now describe as the West Side.

Long before City Hall was built, St. Anthony’s Church – now in the shadow of City Hall, was the primary place of worship for Buffalo’s Italian population. Italians began to move in from what is now City Hall north to what is now the Peace Bridge.

Right at the center of that newly Italian area was Front Avenue, which would be renamed Busti Avenue in honor of Buffalo’s first celebrated Italian in 1930.

It was the third attempt to name a street after Paulo Busti, an agent for the Holland Land Company. Like many of Holland’s executives, his name appeared as a street name on maps of early Buffalo. The original Busti Avenue was re-christened Genesee Street. The streets now known as Upper and Lower Terrace streets were once known as Busti Terrace, before Busti’s name was dropped off the map for a second time.

A 1930 breakdown said that there were about 20,000 Buffalonians who had been born in Italy, and another 45,000 who had at least one Italian-born parent, making Italians Buffalo’s third most numerous foreign-born residents, behind Germans and Poles.

Buffalo’s Italian community celebrated when, in 1958, the first one of their own was elected mayor. Frank A. Sedita – who grew up in the neighborhood behind City Hall, doing the jobs typical of grammar school-age Italian boys like shoeshine boy and newspaper hawker – was elected to three terms as Buffalo’s mayor. 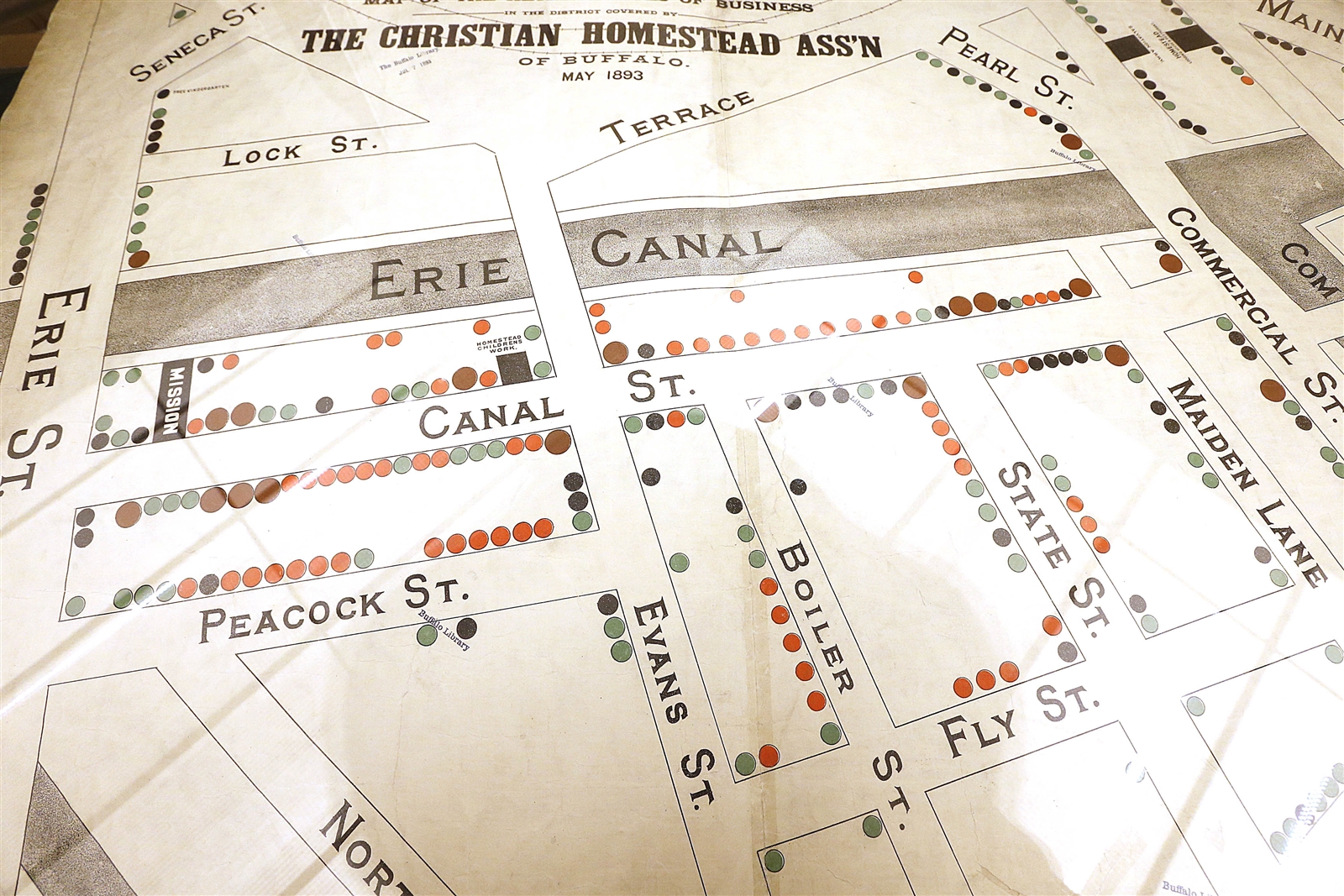