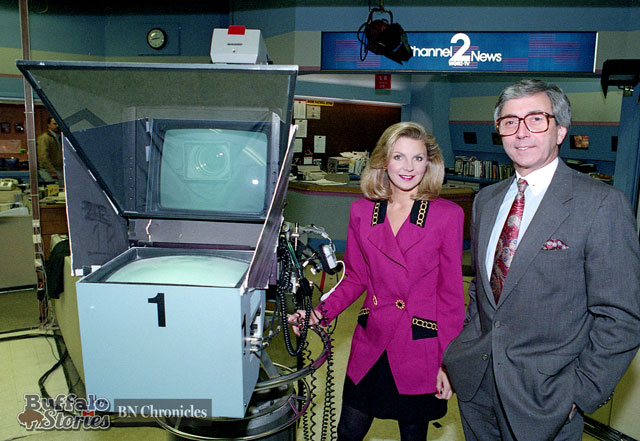 With a smile and personality more reminiscent of a Vaudeville comedian than a meteorologist, Barry Lillis’ ceaseless efforts to make Buffalo smile while offering the forecast through the ’70s, ’80s and ’90s have made him one of Western New York’s most loved all-time television personalities.

Born and raised in Niagara Falls, Lillis grabbed his first broadcasting gig at WGGO Radio in Salamanca in 1963. After spending a decade all around the TV dial and all around the country as a weather anchor and children’s show host, he came back to Buffalo and WGR-TV in 1976 as the weather anchor alongside newsman Rich Kellman and Ed Kilgore on sports.

Barry left Channel 2 in 1981 for Pittsburgh, but two years later, he was back and hosting the cult classic all-night movie show “Barry’s Cat’s Pajamas.”

Had he just spent parts of three decades as Buffalo’s favorite weather goofball, it likely would have been enough. But what really endeared us was his heart—tearfully on display in the raw, as he became synonymous with Channel 2’s Muscular Dystrophy and Kids Escaping Drugs telethons.

Since leaving Channel 2 in 1996, Barry has run for Pomfret town justice, was ordained as an Orthodox Catholic priest, and has opened a wedding chapel helping hundreds through their wedding vows.

He’s also helped hundreds through addiction. Lillis marked Dec. 21, 1984, as the day he began his own recovery from alcoholism.

In 2014, Barry moved Western New York’s hearts again as he made public his battle with late-stage cancer.

From the BuffaloStories.com archives, this is a 1976 Barry Lillis weather forecast, taking you around foggy downtown Buffalo and out to the airport, offering up a healthy serving of Barry’s standard zaniness as well.  Rich Kellman is at the Channel 2 newsdesk.