I’ve recently come across two great Polish websites to do Polish genealogy research– to find stuff not on ancestry or familysearch.

Broken down by provinces, http://www.geneteka.genealodzy.pl/ has a lot of easily searchable information. It almost acts as an index for http://metryki.genbaza.pl/, which has scanned thousands of Polish church records.

I’ve found what I can on the first, and now I’m staring at Polish documents written in Russian.

That first line is CICHON in Cyrillic. 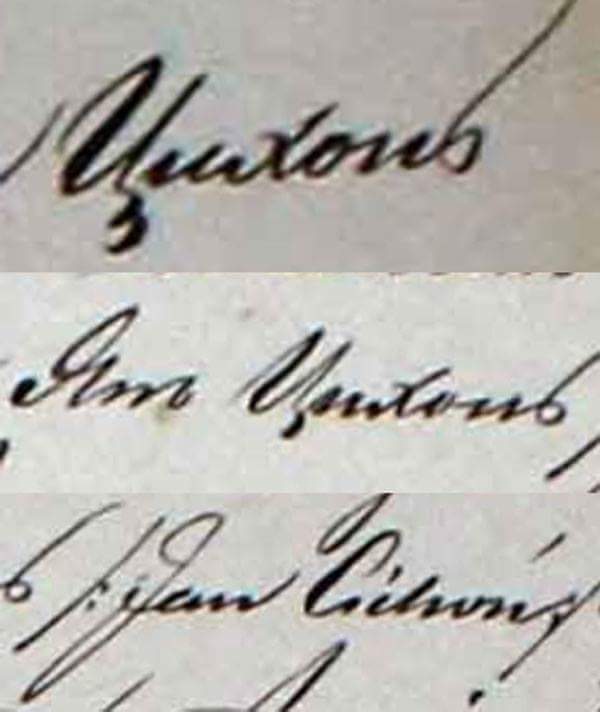 I just keep looking for Чехойнь until I go blind or find my great grandfather, whichever comes first.

Every time I visit my grandpa in the nursing home, he wants to know if I’ve tracked down the “Cichons in Brazil” yet.The family legend is that three Cichon brothers eventually came to America, my great-grandfather and his two older brothers. My great grandfather stayed, his two brothers went on to Brazil.

For decades worth of research and genealogical digging, I’ve have found out exactly NOTHING about the Cichons. We have great family stories, mostly from my grandpa and his sister Mary, but no records, no documents. Don’t know which Polish towns my great-grandparents are from. Don’t know what their parents’ names are. Don’t have anything like the ship manifest that took my great-grandfather and my great-grandmother separately to the New World around 1913. The trail ends cold in Buffalo’s Valley neighborhood.

Cichon isn’t the most common name, but it’s common enough. Especially when you are looking for information on John and Mary Cichon.

The story is, they met and fell in love in Buffalo on Fulton Street, both having just arrived from Poland, and then got married. As far as I can tell, there is no record of their marriage. Not in the likely several churches I checked, not at Buffalo City Hall.

Great-Grandma Cichon’s maiden name is Pochec, a very unusual name. I contacted a guy in Canada with the last name Pochec and an obviously Polish first name. He says all the records of his family’s existence were destroyed in war… The world wars and any other number of wars that have marred that part of Eastern Europe for centuries. Pochec has been a dead end. She was half Polish, “half Turk,” as my grandpa says. Her dad was a baker in the Turkish army.

Great-Grandpa worked as a laborer for National Aniline in their railroad yard for about 40 years. Back in Poland, he was a cobbler. Gramps said his pa always kept the shoe making tools he brought with him from Poland, just in case.

This is about all I have to go on, so when I see some bit of information with potential, I get excited.

My great-grandfather told 3 or 4 different census takers and the World War I draft board that he came here in 1913, so that seems legit. Around 1913, there were no fewer than 8 or 9 guys named Jan or John Cichon taking boats to North America. Anyone of them could be my great grandfather, or none of them could be. One of those ship’s manifests really has set my mind to wonder, though.

It shows 20 year-old Jan Cichon from “Kurowa?,” son of Tomasz, sailing from Holland to meet up with a friend in Connecticut in October 1913. This has the right date, the right name, and this Jan is the right age, but there’s nothing for certain that points to “steerage passenger 13” on the SS Nieuw Amsterdam as being my great-grandfather.

But in going over this two page document, having to shift back and forth between two jpgs of this horizontally long ledger, something that’s just too odd to overlook caught my eye yesterday.

Passenger 21 is a 19 year old German young lady of Polish decent who is on her way to the New World as well. According to the ship manifest, Emilie Rakowska told Immigration officials that she’s on her way to rendez-vous with her brother Heinrich. Heinrich Rawkoski lived in Buffalo at 909 Perry Street. That’s about 10 houses away from the house that the Jan Cichon who is my great grandfather would buy and spent the next 60 years living in.

It’s either an amazing, colossal coincidence, that some other 20 year old guy named Jan Cichon from Poland got on a ship in Holland headed for the US in 1913, and just happened to be on a ship with a woman who was bound for the exact block where another Jan Cichon would arrive in the same year… or Great-Grandpa Cichon wound up in Buffalo chasing a single chick, his age, that he met on the boat ride over here.

I’m just about convinced that this is my dziadzia. How could it not be? I’m going to do some more research on the decent amount of information provided on the John Cichon who was on the New Amsterdam that day, and see if it fits into some of the family stories and lore.

History and genealogy really are cool. Sweeping the cobwebs off the front door is going to have to wait.

Here are the difficult to read documents (edited to make it a little easier): 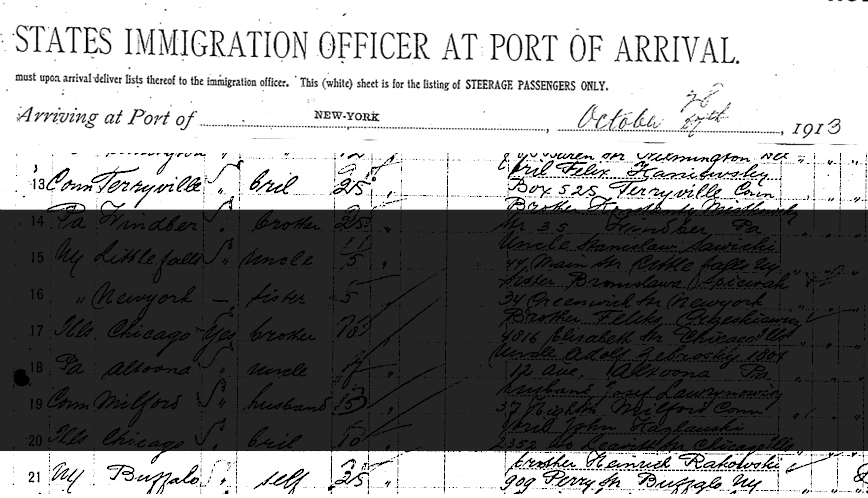