Twenty-seven years ago, an overtime field goal win over the Jets was enough to clinch the 1988 AFC East title for the Buffalo Bills and enough for fans to take down the goal posts at Rich Stadium. 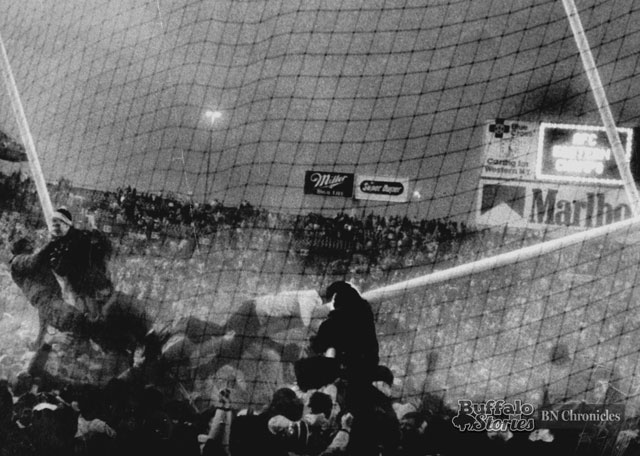 It wasn’t the first time the uprights came down.

In 1980, when Bills fans stormed the field following the team’s first win against Miami in more than a decade, team owner Ralph Wilson famously told reporters he shared in the fans’ excitement and would be happy to buy new goalposts.

But team officials had grown weary of the tradition by the time the Bills were making it to Super Bowls every year.

When the Bills clinched the division against the Dolphins in 1990, fans wanted to take down the goalposts again. The perimeter of the field was lined with police on horseback. It was promised that fans would not be allowed to take down the posts.

As public address announcer and then-WBEN disc jockey Stan Roberts implored fans to “please stay off the field,” goal posts were passed over the mounted deputies and through the crowd. Somehow hacksaws showed up and were used to divvy up the uprights — which, Stan reminded the fans, to no avail, were needed for playoff games.