The area is now the parking lot next to the HSBC Atrium on Perry Street, but in 1945, it was the home of the Market Terminal Warehouse. 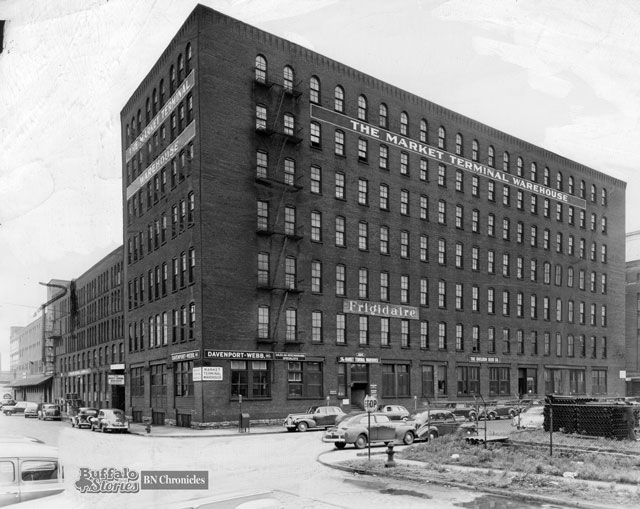 The building’s name referred to the Elk Street Market, which was across Michigan Avenue from the building. The Market Terminal Warehouse filled nearly an entire block bounded by Perry, Mississippi and Scott streets.

The building had been, for generations, the home of a sheepskin tannery owned by Jacob Schoellkopf. Schoellkopf used the fortune he made in tanning to invest first in milling and brewing, then railroads and banking, before becoming the “King of Electricity” after buying up several firms that were trying to harness the energy of Niagara Falls to make electricity.

He eventually also started the Schoellkopf Chemical and Dye Co. along Elk Street and the Buffalo River, which was eventually bought out by National Aniline.

After years of back taxes piled up, Schoellkopf & Co. sold the building in 1945.

The building was also one of many Buffalo industrial scenes photographed by abstract painter Ralston Crawford, who grew up in Buffalo and attended Lafayette High School before going on to capture industrial scenes like Buffalo’s grain elevators, bridges, trains, and aircraft. Considered one of the innovators of Precisionism, Crawford’s work graced both the covers of magazines such as Fortune and the halls of such great museums as Metropolitan Museum of Art in New York.

The exact demolition date of the building is unknown, but dates to sometime before the opening of the then-Marine Midland Atrium in 1991.