The word unbelievable is thrown around — but the lineup at the 1960 Buffalo Jazz Festival at Offerman Stadium was pretty close to unbelievable.

The run up to the event received plenty of coverage in the Buffalo Courier-Express, The Buffalo Evening News, and The Niagara Gazette.

Co-produced by Ed Sarkesian and George Wein, in association with WEBR disc jockey Joe Rico, the festival features a lineup of entertainers that reads like a “Who’s Who in Jazz.”

The idea for staging a Buffalo Jazz Festival represents the collective thinking of professional producers and interested local businessmen. Producers Sarkesian and Wein regard Buffalo as one of the top five jazz markets in the country, based on the  record of successful shows staged at Kleinhans Music Hall and local theaters.

The Niagara Gazette reported that a ‘”Living Stereo” sound system was to be installed in Offermann Stadium at a cost of $6000, “assuring that the audience will hear every chord struck by the Dave Brubeck Quartet, every run from Louis Armstrong’s golden trumpet and every note played and sung by Dinah Washington, the Duke Ellington Orchestra, Gene Krupa, Count Basie, Dizzy Gillespie and the other stars who will appear.”

As far as the show itself:

Gill also reviewed the last day of the show for the Courier.

The second part of Buffalo’s first Jazz Festival concluded last night at Offermann Stadium where again some of the top names in music produced an evening of fine entertainment for an enthusiastic audience.

The total attendance for the Saturday and Sunday night shows was 16,000.

On stage last night was an array of celebrities equal to the standards of the opening edition. Such personalities as Chico Hamilton, Duke Ellington, Gene Krupa, Oscar Peterson and Louis Armstrong were on hand. It also marked the first Buffalo appearance of Jackie Cain, Roy Kral, and Cannonball Adderley.

Hamilton’s Quintet, which is built around his fine drum work; Ellington’s orchestra in the blue mood of the old master, Krupa’s torrid drums, and Peterson’s great piano playing highlighted the festivities.

Armstrong’s appearence brought the usual reception for the great “Satchmo,” whose trumpet and gravel voice are a must for any succesful jazz gathering.

Cannonball Is a Hit

Cannonball Adderley and his alto sax, backed up by his side men, brought about interesting improvisations on the jazz standards. The integration of vocal sounds with those of the instrumental, placed Jackie Cain and Roy Kral well up in their
chosen classification.

Local talent again received its opportunity. Patti Leeds, accompanied by the Sammy Noto Quintet, was as vocally pleasing as she was visually appealing.

She turned easily from sultry ballad to belting chorus, with all the accomplishments and polish of a top professional. All indications are that her future it very bright. (WEBR disc jockey) Carroll Hardy provided the program introductions.

Among the odd stories from weekend festival– it was the first major event where The Buffalo Police Department’s new K-9 squad was given a public appearance.

Working out of the Franklin Street station, “The dog, his handler and the van patrolman-driver form a team which check trouble spots anywhere in the city,” reported the Courier in a follow-up article. “No job is too small — roaming through pool parlors, mingling at crime scenes, even issuing traffic tags.

“Their finest hour was handling the crowd at the recent Jazz Festival in Offermann Stadium. Not one disturbance took place during the concert or on any streets afterwards. The promoter told Lt. Carr it was the only peaceful concert on his tour.” 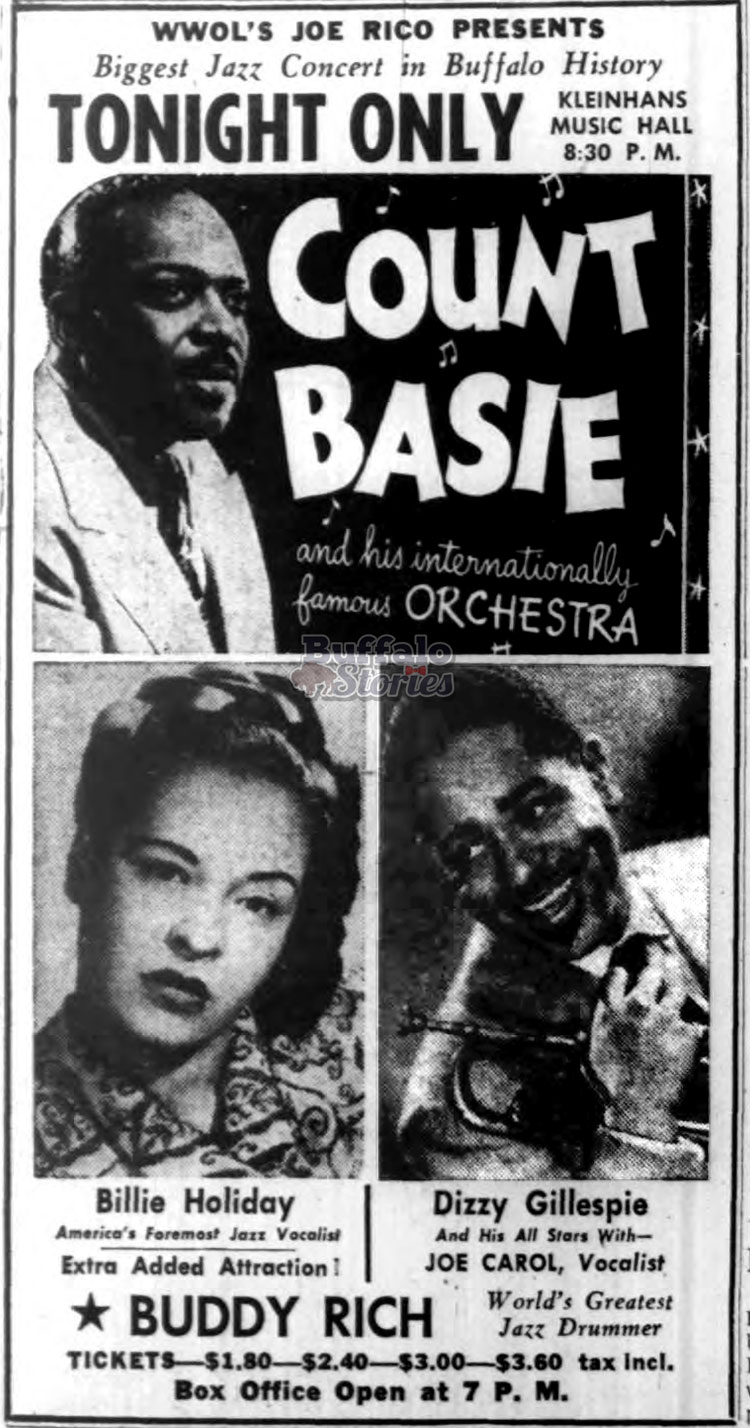