Like so many of our great cultural traditions in Buffalo, trying to pin down the concise history of our collective amber-hued fuzzy memories of Downtown Christmas shopping is difficult and can even get combative.

For many of us, all those warm recollections seem to get lumped into a generic category of “AM&A’s Christmas windows,” and to imply anything else is often met with side eye looks, and sometimes with outright hostility.

Through the decades, some stores moved, some changed names, all eventually closed. Taking the fuzz off memories and bringing them into focus with the actual names and dates can be dangerous business, but that’s the dangerous business we’re in. So here we go.

The tradition of decorating downtown stores for Christmas dates back before anyone reading this can remember. Downtown’s department stores were fully decorated, for example,  for Christmas 1910.

Since those stores—some with familiar names—decorated their windows more than a century ago, plenty has changed along Buffalo’s Main Street, especially in the areas where generations did their Christmas shopping. 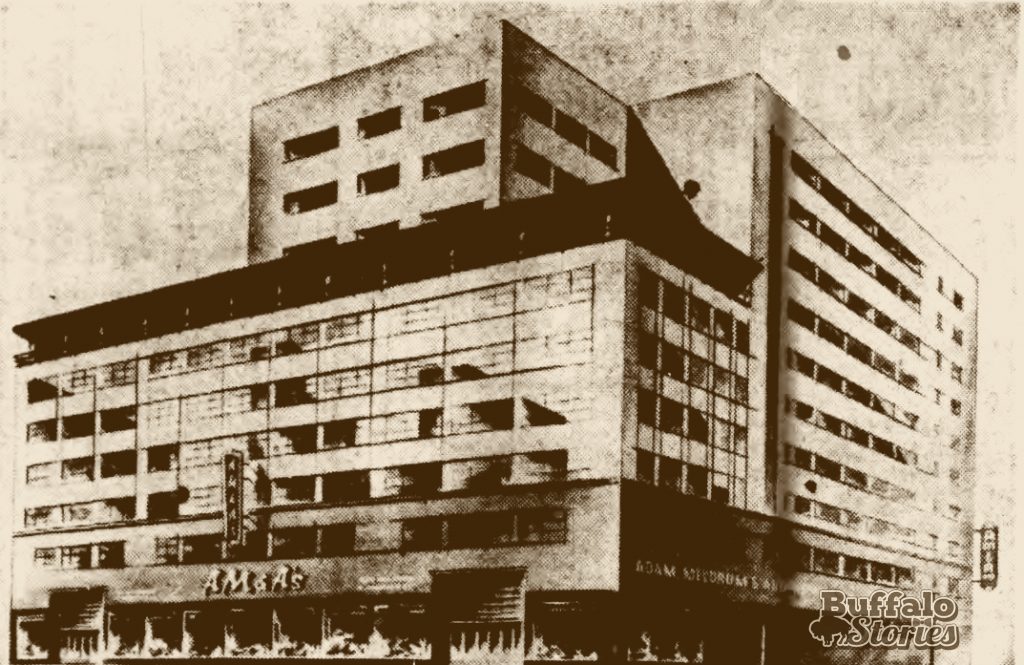 The most tumultuous change came between 1965 and 1985, the time when most of our memories were forged and influenced. The buildings we shopped in for decades came down, new buildings were put in their place, and traffic was shut down with a train installed in place of the cars.

The one constant through all of that, our collective memory tells us, is those wonderful AM&A’s windows.

Adam, Meldrum, and Anderson was a Buffalo institution between 1869 and 1994, when the Adam family sold the chain to Bon-Ton. That being the case, for as long as anyone can remember, people off all ages would line up along the east side of Main Street, looking in those big AM&A’s windows, before going inside and taking the escalators up to AM&A’s Toyland starring Santa himself. 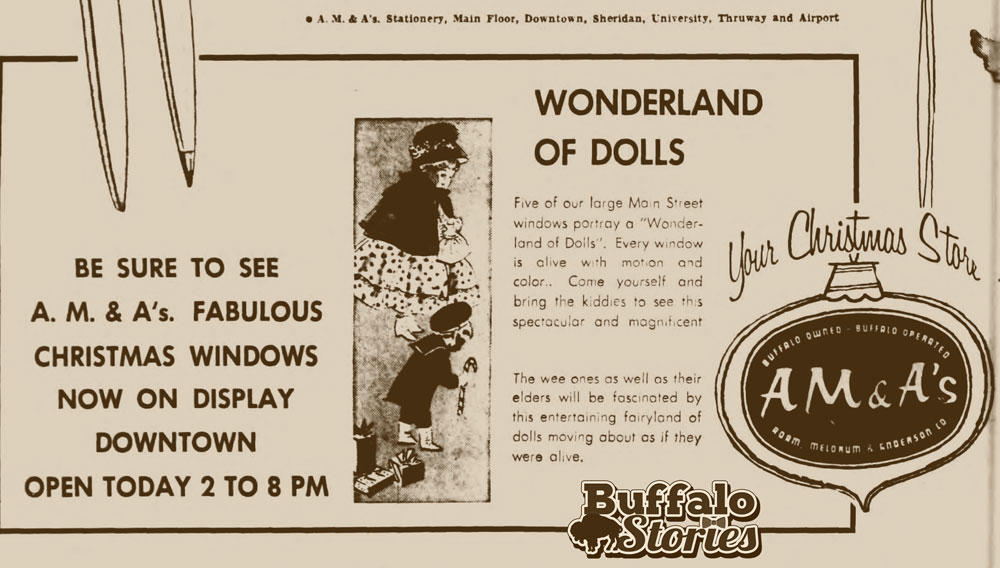 Well, here’s where the hostility sometimes comes in.

If you remember looking at windows in that spot before 1960—you weren’t looking at AM&A’s windows, you were looking at the windows of JN Adam & Co.

For more than 90 years, AM&A’s was located directly across Main Street from the location where the store’s flagship downtown location was for the final 34 years of the chain’s existence.

JN’s closed up in 1959, so AM&A’s moved into the larger, newer building. Soon thereafter, the original AM&A’s was torn down to make way for the Main Place Mall.

Adding to confusion is the similar name of the two stores. JN Adam and Robert Adam—the Adam of Adam, Meldrum & Anderson—were Scottish-born brothers who founded department stores which would eventually compete with each other across Main Street from each other. 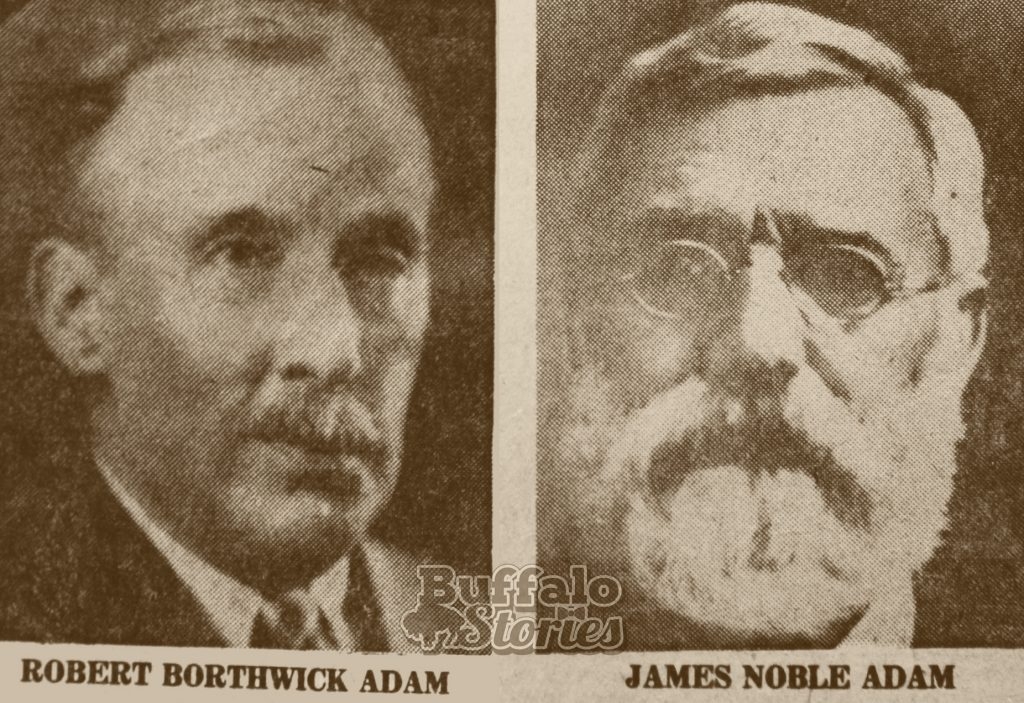 Both stores also took their window decorating—especially Christmas window decorating seriously. But so did all the Main Street Department stores. On the same block as JN’s and AM&A’s, Kobacher’s, which had a location in a spot now occupied by the Main Place Mall, had a memorable giant animated, talking Santa in its window. Hengerer’s, a bit further north, always had well decorated windows.

Still, AM&A’s and JN’s made the spot just south of Lafayette Square the epicenter of Christmas décor in Buffalo. As early as 1949, JN Adam was promoting “animated Christmas windows.”

AM&A’s decorating team, eventually headed by Joseph Nelson, started adding animated displays as well, although it wasn’t until the 1960s—after AM&A’s moved into JN Adam’s old space—that AM&A’s made the presence of the windows a part of their Christmas advertising.

It’s tough to tell even if the “AM&A’s window displays” which have popped up around Western New York over the last couple of decades were originally created for and by AM&A’s. AM&A’s took over not only JN’s building, but also many of its traditions, and quite possibility the actual displays and accoutrements of those traditions. 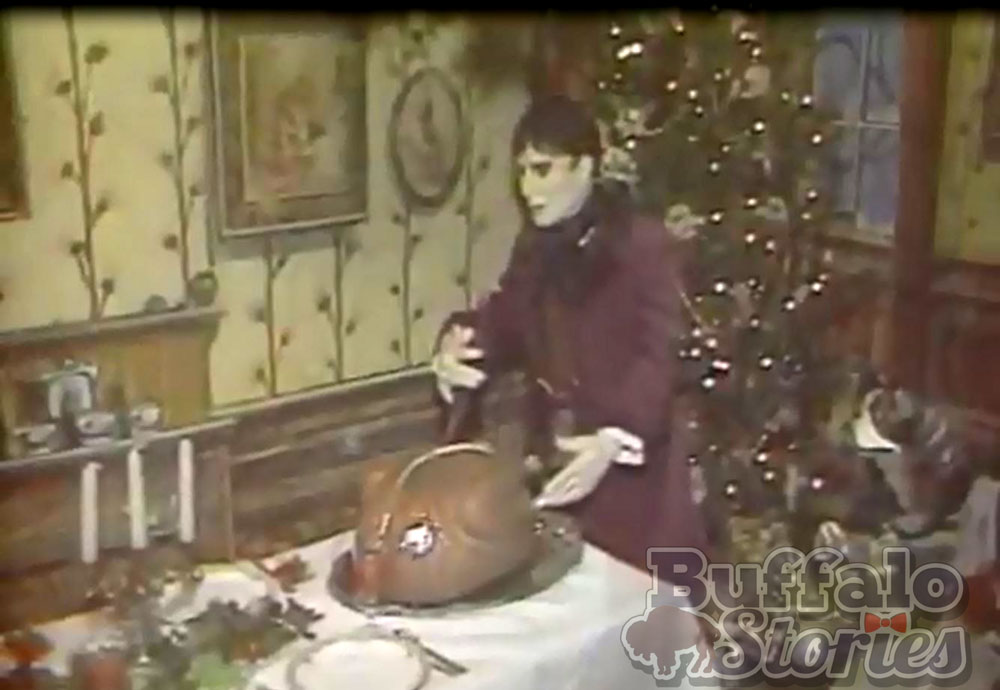 Another JN Adam yuletide tradition which also became an AM&A’s tradition after the move was the full-floor Toyland.

All this is to say, if you walked down Main Street in mid-December 1955, the magic and wonder you were filled with was only partially Adam, Meldrum, and Anderson-inspired.

But AM&A’s was the survivor—which is why we remember.  But just keep in mind– it’s very likely that 1955 window you remember was a JN Adam’s window.

But no matter which store displayed these windows when, they have always been a universally beloved Buffalo institution, right?

Well, once again… not exactly. As traditional Main Street retailing was gasping its last breaths in the late ‘80s and early ‘90s, the Christmas windows were often derided as a part of the larger problem—rehashing the same ideas instead of trying to appeal to a new generation. The dated, tired animatronic scenes seemed out of place and woefully out of date in the Nintendo age.

When this snarky review of AM&A’s holiday decorating efforts appeared in The Buffalo News in 1993, the writer probably didn’t realize he was looking at the penultimate effort of a nearly-dead Buffalo institution.

In the AM & A’s window downtown, the same (manger scene) figures are placed in front of a set of free-standing Baroque pillars, all marbleized in green and gold. Lofty, that. If Gianlorenzo Bernini were around today, that’s what he’d be doing for a living: AM & A’s window displays…

(And) at AM & A’s downtown, the other holiday windows display a charming mixture of images, though if any community actually tried to build like this, folks would be petitioning for a design review board before the developers knew what hit them: New England covered bridge here, rough-hewn alpine furnishings there. One window features a frilly pink Victorian cottage that looks as if it could have been plucked off a side street in Allentown.

Since AM&A’s flagship downtown store was closed shortly after selling to Bon-Ton in 1995, the legend of the window displays—and the actual displays themselves—have spread far and wide.

In the mid-90s, Buffalo Place refurbished and displayed the most-recently-used scenes along Main Street. Some of those, along with older scenes as well, have appeared around Western New York in holiday displays in the Village of Lancaster and in Niagara Falls, as well as around Rotary Rink near Main and Chippewa. 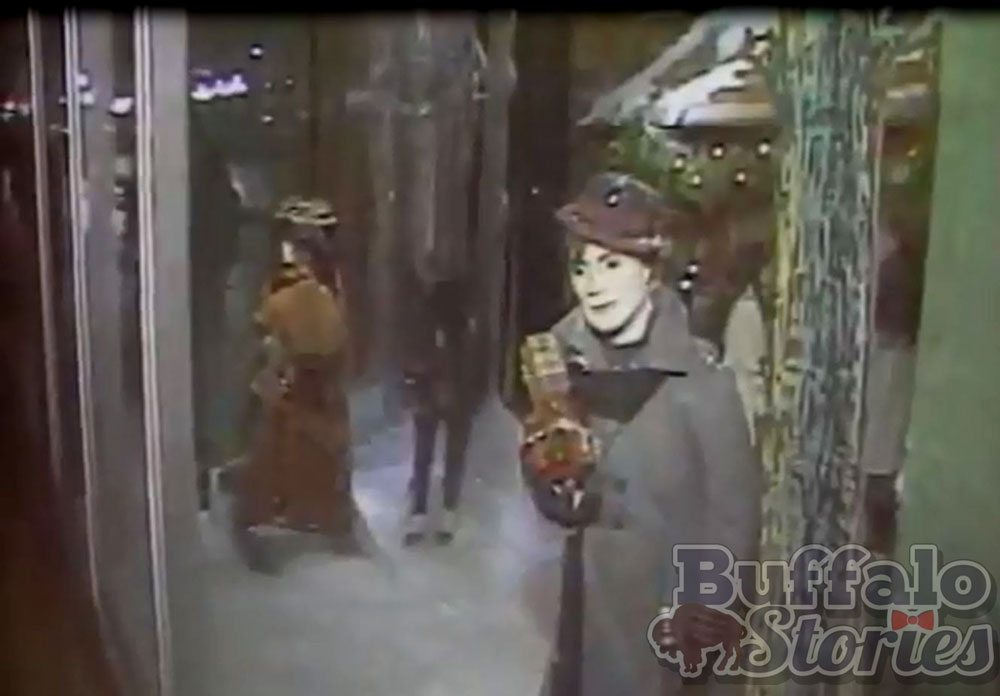 The actual displays are interesting, but seeing them out of context—or even worse, trying to pry an iPad out of the hand of a toddler so she can appreciate them—seems to miss a bit of the point.

A Victorian man carving a turkey or a big white bear handing another bear a present isn’t what make those memories so wonderful—it’s the way the memory swells your heart.

Here’s to whatever makes your heart swell this Christmas season. 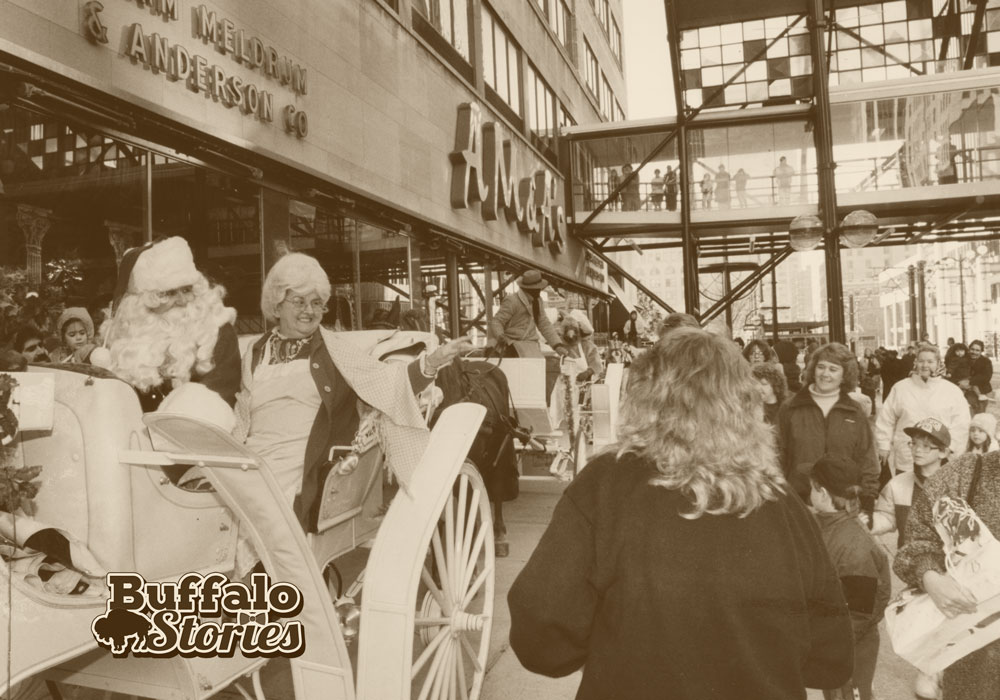