With the world’s finest 18-year-old hockey players descending on Buffalo last month for the NHL Entry Draft at First Niagara Center, hockey fans here remain excited about the potential of the players drafted by the Sabres. 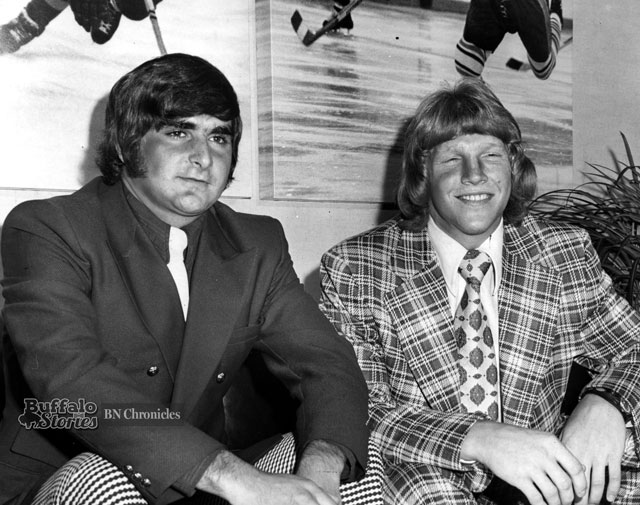 If the Sabres top picks of 2016 turn into the level of players drafted by the Sabres in 1972, fans will be plenty happy. The August, 1972 photo shows defensemen Larry Carriere and Jim Schoenfeld—the Sabres top two draft picks—in Buffalo to sign their contracts.

Schony was a 200-pound lefty who played junior hockey for the Niagara Falls Flyers with 20 goals and 29 assists. He was the fifth pick overall in the 1972 draft.

Larry Carriere was the 25th overall pick, and started the season with Buffalo’s AHL farm club, the Cincinnati Swords. His NHL break came when fellow defensemen Schoenfeld and Mike Robitaille went down with injuries and he was called up to the big club.

He was with the Sabres through the 1975 Stanley Cup season, but Carriere was traded to the Atlanta Flames.  He returned to the Sabres for seven games in 1978, but after a two-game stint with the Leafs in 1980, his playing days were over.

Carriere returned to the Sabres again, this time in the front office. He started as a scout, and worked his way up to Assistant General Manager under Darcy Regier. Though he still lives in Buffalo, he holds that same Assistant GM title in Montreal with the Canadiens.