Cleaning up in the attic, one box had some high school files in it, including a screen print of a David Letterman drawing I did in 10th grade.

I was such a big fan to the point where I wore sneakers with my double-breasted sport coats just like Dave… and, at just barely 16 years old, I used my first radio paycheck (judging by the date on this invoice) to mail order a box of 50 cigars– so I could drive around in my ’74 VW, wearing a bow tie, heading to my job at a radio station with a big ol’stogie going, paying tribute to Letterman and having about the greatest existence any 16 year old could ask for. 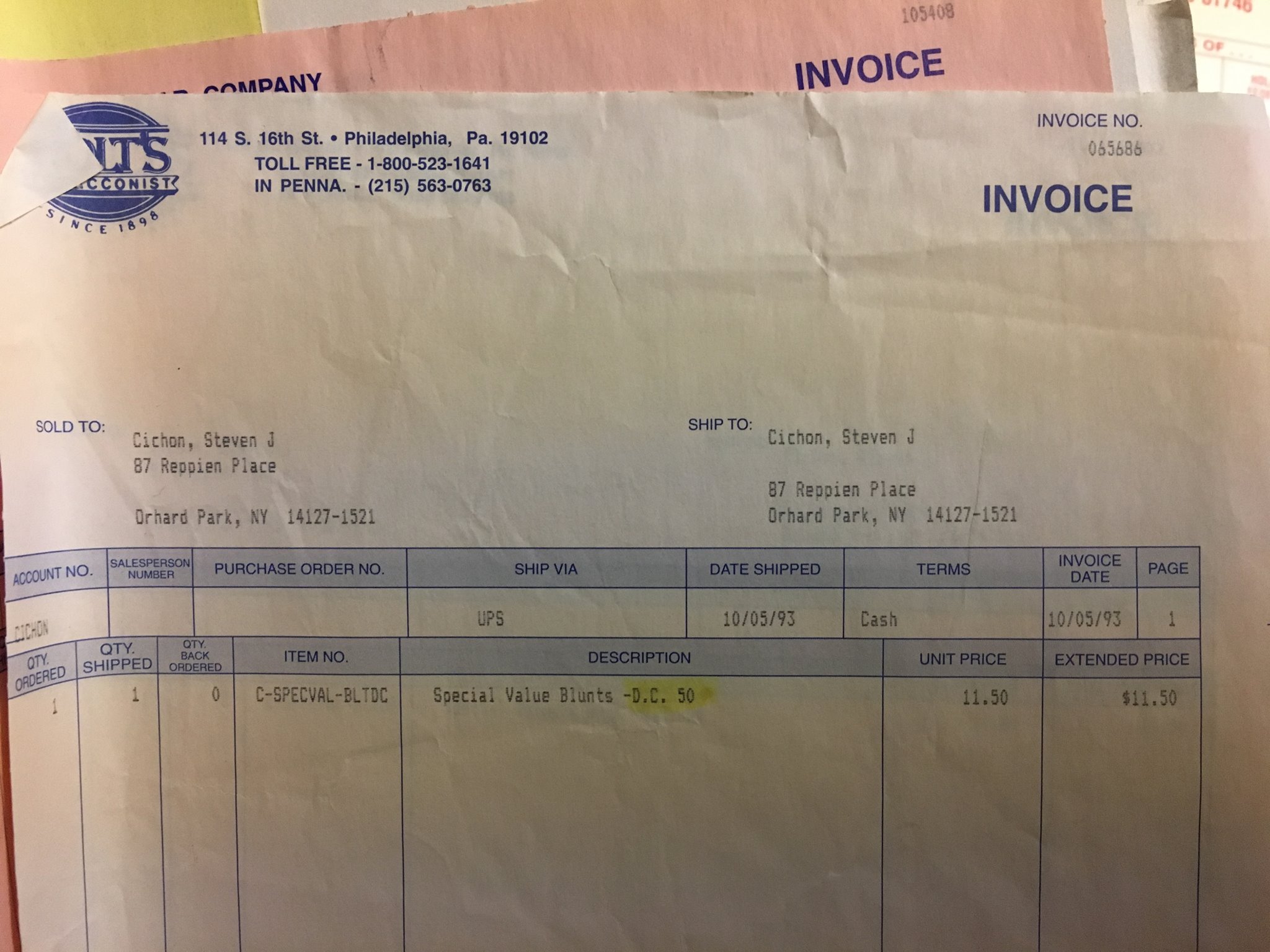 I think my plan was to make some kind of “public art installation” (aka graffiti) with my silk screen Dave… but as I recall, the ink didn’t stick to the surface I tried to plaster. What a pisspot. (I don’t think I could define pisspot, but I know one when I see one. And the older I get, the more of them I see!)

My intense love affair with David Letterman started in our basement family room in front of the huge RCA console TV my dad bought at FWS in the Como Park Mall.

The volume was on the lowest possible setting with sound still coming out. This was the 80’s, and the set had fancy new stereo sound. I turned the balance to the right, and pressed my ear up to the single speaker that still had sound coming out so I could hear Letterman’s monologue and first bit before going back to bed to get up for school at 6:30.

I don’t think little 11 or 12 year old Stevie was ever caught watching Letterman at 12:45 as the rest of the house slept, but the exhilarating mix of fear and excitement are with me even now thinking about it. So that’s number ten. Dave was my rebellious stage.

I think all that points to how Dave and I might have drifted apart. In the mid-80s, he was a goofy overnight bad-boy TV host with bad hair, and I was a little kid who loved people who loved to make me laugh– but lived in fear that my mom would kill me if the sound from the TV woke her up. Also, my haircut came from Tony “The Barber” Scaccia on Seneca Street in South Buffalo.

Thirty years later, and we’ve both changed. Dave is richer than Rockefeller and late night royalty, but still with bad hair. I’m now a lumpy middle aged guy who loves people who love to make me laugh– but I live in fear that my wife will kill me if the glow of my iPhone wakes her up. Also, my haircut still comes from Tony “The Barber” Scaccia on Seneca Street in South Buffalo.

On to number nine–Grandma Cichon. It was my crazy-in-mostly-good-ways Grandma Cichon who put me onto Letterman when I was about ten years old. I think we were sleeping over at her house one night, when I first saw Johnny Carson’s monologue. It changed my life. It was like the news (which I loved and watched with my dad everyday), but it was funny. Jokes about the people in the news. Incredible.

I’d stay up (or more likely sneak up) and watch Carson whenever I could– the monologue and first bit, anyway. The only person I could to talk about the great, hilarious things I heard from Johnny was Grandma. My parents didn’t watch Carson– Dad turned off the news after the news part (he didn’t need weather and sports.) There weren’t many of my 6th grade friends watching Carson either.

So, when I’d regularly ride my bike from Orchard Park to Seneca Street in South Buffalo to visit with Grandma Cichon, Grandma Coyle, Gerry at the Paperback Trading Post, and Tony the Barber– I knew I’d be able to talk Johnny with Grandma Cichon. One day, she told me I should watch Letterman, and I was never one to disobey my grandmother. And so it began.

Number seven… for better or for worse, his TV persona has always been a reflection of who he really is. He’s an old crank now, and we see that on TV. Was Carson (who Dave is always seemingly compared to) better because he faked being a nice guy really well, and viewers might not have known that he was an abusive drunken womanizing bastard?

While I don’t really like this cranky old Dave, I think I’d like it better than having a cranky old man pretend like he was having fun running around catapulting meat products against the sides of buildings every day for a month.

The number six reason I’ll love David Letterman forever: Cigars. Big fat ones. For those who don’t remember, back in the old days, Dave used to come back from commercial breaks taking a last puff or two on a big cigar. Not so much long, but thick– a big ring gauge.

Two of the funniest people in my world were Dave and Groucho Marx, so I guess I thought smoking cigars would make me funnier. The great part is, in 1988, literally no one under the age of 80 smoked cigars. At 12 or 13 years old, I could walk into a drug store and buy cigars without a second thought– unless the thought was, “How nice that this young man is buying cigars for his Grandpa.”

The first one I smoked, I found in a drawer at Grandma Cichon’s house. The first pack I bought was at Rite Aid at the McKinley Mall (sorry Mom, I wasn’t going to a movie. I was going to the mall to smoke cigars.) I always wanted to find a fat one like the ones Dave smoked, and that took me on my bike up to Smoker’s Haven– which is still on Union Road in West Seneca. Again, as a 15 year old, I’d buy the big fat (cheap) Te-Amo cigars there without question.

I still smoke one or two cigars a year, maybe one on vacation. I was in the cigar store the other day, and still– thirty years later– found myself drawn to those fat 60-ring gauge monster stogies.

One thing I really thought was stupid was this general notion among many that “this was this best time of our lives,” and “we’ll never have more fun or be more happy,” blah, blah, blah.

Again, I have softened a bit on that through the years, but I can also say confidently that I was right: for me the best was yet to come. I still feel that way today.

Anyway, that notion of “greatest time ever” is reflected at it’s peak in senior statements/thank yous/quotes. I knew I really wouldn’t remember 5th period science or intramural basketball “4-ever,” so I decided to thank a list of funny people, politicians, news personalities, and radio stations– including of course Letterman.

I acknowledge that my list is just as stupid as any other of the few hundred in that yearbook, but it was resoundingly substantive for me then, and it was also something different.

And the intention was to make you smile, if not at the joke, than the stupidity of it. That’s a Letterman trademark, and leads into the next on the Top Ten Reasons I’ll Always Love Dave…

Number three: he showed me the path to a great mix of intelligence and stupidity. I try to be really good at both of those things. I may have figured it out on my own, but having a little help at 12:35 every night didn’t hurt.

Number two is more of a technical appreciation that I’ve come to as a long time journalist and broadcaster. Being a good interviewer isn’t easy, but Dave generally makes it look so because he adapts in many, tiny nuanced ways to put his guests in the best light possible. Sometimes this means taking charge, sometimes taking a backseat.

Especially with the greats, Dave not only played his role, but relished it. No one can keep up with Don Rickles. Too many try. Many others laugh, which doesn’t really help Rickles. Dave knows how to let Rickles be the best Rickles.

Even now, while he might seem like grandpa interviewing some flavor of the week starlet, I think he does the best, most prohibitive-while-still-friendly interviews around.