Many of us are making plans for a three-day weekend, but in this run up to the Memorial Day weekend– we’re remembering the sacrifices made in Buffalo and by Buffalonians. 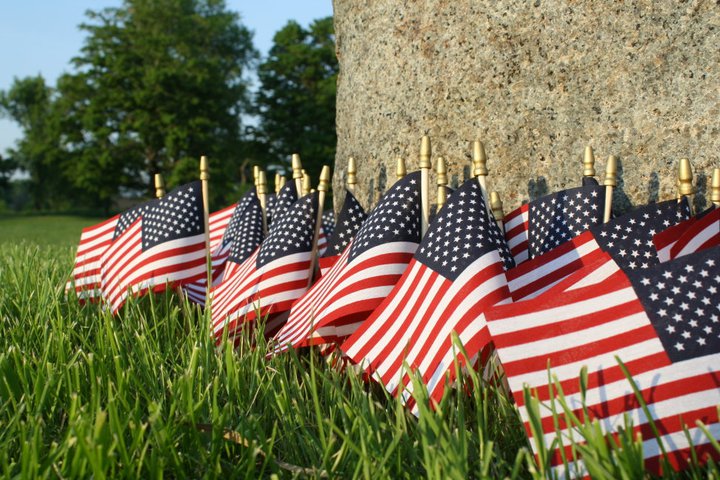 On November 3, 2016, Andrew Byers, 30, a Captain with the Army’s airborne 10th Special Forces Group was killed in Afghanistan.

“Gone are the days of Memorial Day as the start of summer and worrying about whose barbecue we’ll be going to,” says Lauren Byers, Captain Byers’ twin sister.

For Lauren and the Byers family, Memorial Day is now more than ever about striking a balance.

“I think we’re all looking for that thing to do to honor him, but also not be frustrated when you see all the commercials and ads that say ‘splash into summer’ or ‘Memorial Day Sale’ and not feel that twinge of pain, that that’s not really what Memorial Day is,” says Byers.

“How do you choose something that’s meaningful and balance that with knowing that your family member would want you to enjoy your time together as a family.”

A Memorial Day holiday might involved a chat about the Sabres for Andy Byers, whose love of the team followed him all around the world in service to our country. But that service is something Captain Byers knew he wanted to pursue from an early age.

“Even after he passed, we went to his office at Fort Carson, where he had a Sabres coffee mug on his desk,” says Lauren. “But he knew when he was 15 that he wanted to serve.”

It took her some time to accept her brother’s choice of career, but now Lauren looks on her brother’s service and ultimate sacrifice with a mix of pride, devastation, and working to keep the memory of her brother– and all fallen service people– alive.

“I think for Gold Star families, the challenge is two fold,” says Lauren. “We don’t want out family members to be forgotten. We don’ t the lives they lead to be forgotten. He would say, ‘If not me, then who?’ Someone needs to do this job. I am capable, I will be the one to do it.'”

What would Lauren like to see people do on Memorial Day? Just remembering those who’ve given their lives for our freedom– including her twin brother.

“People remembering them, the choice they made, and how they lived their lives– and giving them the respect that they are do.”

We’re looking at one man’s quest to make sure the memories of the 532 Western New York service members killed in Vietnam live on.

Promises of peace came and went several times during the decades that American soldiers were in Vietnam… Peace was fleeting, too, for many if not most of the men and women who returned home from Southeast Asia.

“I just didn’t want these men and one woman to be forgotten,” says historian and Vietnam Veteran Pat Kavanagh, who started a huge project and labor of love started with the simple thought.

“Come hell or high water, I’m going to try to find all the original obituaries of those from Western New York killed in Vietnam,” says Kavanaugh of the through that sent him on his quest. “Right from the start, it just became very emotional.”

Kavanagh visited dozens of libraries and sent all around the country for microfilms, but the greatest effect was in leaving a small town library, and knowing this is place where this man who was killed in action once walked and made plans for a future which never came.

“I thought I was a hard guy, but after reading and copying these obituaries, I’d get into the car, and I’d pass the street where he lived. I’d pass the school where he went. I’m saying, ‘these guys are only 18 or 19 years old, and they’re dead.’ They’d been killed so far away from home,” says Kavanagh. “This is the least we can do for them.”

It’s been years since he started the project and Pat feels the collection with remembrances of 532 WNYers killed in Vietnam is as complete as it can be.

Read More: Pat’s  Information on all 532 veterans with direct ties to the eight counties of Western New York who were killed or died while on active duty in Vietnam

The late Michael Accordino was a member of the 299th Combat Engineer Batallion on D-Day.

“For D-Day, we were munition men. We had to build the obstacles on the beach,” said then-Private Accordino in a 2011 interview. He and his mates were under heavy fire as they laid the way for infantry and artillery men to fight their way across and liberate Europe. 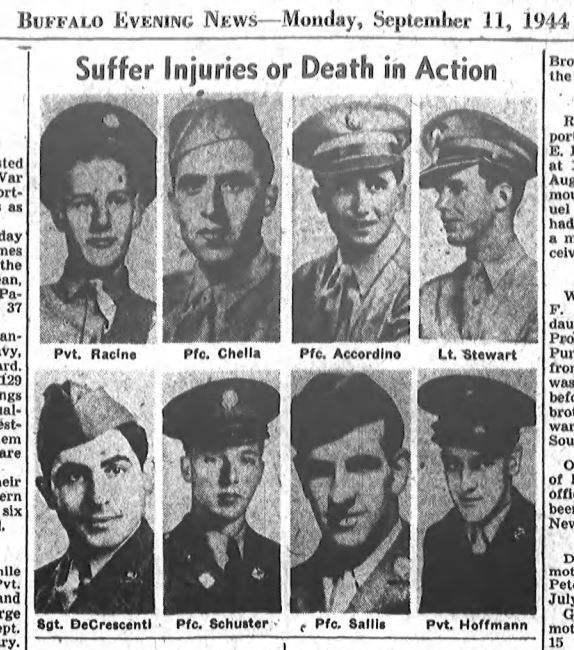 “There was a lot of firepower from the Germans up on the slope. Lots of machines guns, lots of mortars, lots of artillery as we were hitting the beach,” said Accordino. “We had to work in those conditions. One guy put it this way– imagine trying to mow your lawn, and your neighbor is throwing rocks at you. That’s what was happening to us.” 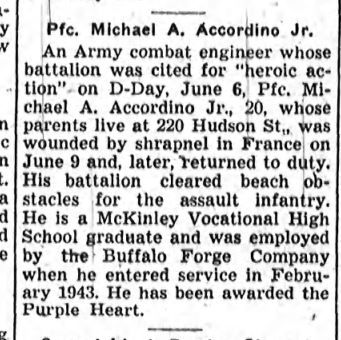 Accordino’s story is one of survival, but it’s a story he told often through the years so that people wouldn’t forget the sacrifice of the thousands who didn’t make it off of Omaha Beach.

The machine gun bullets were landing at my feet. I moved, and a guy raised his sights. He was going to get me, so I turned around and ran back to the obstacle. It wasn’t very big, maybe eight inches of protection.

I laid there, and to my right, there were these guys with a big spool of wire, and I wondered what they were doing with this wire.

They were about ten yards away from me, and I yelled over, “what are you guys doing there?”

All the sudden, they got hit. I seem them rolling, swaying back and forth. They got hit. I looked like someone threw a mortar in there.

I got up, I got the hell out of there, man. I got to the new line, and I just kept on doing my job.

Mr. Accordino was awarded the Purple Heart after receiving shrapnel wounds on the beach at Normandy. I spoke to him on D-Day in 2011. He died in 2012.

Buffalo’s Tomb of the Unknown Soldiers

First, it’s the story of Buffalo’s own Tomb of the Unknown Soldiers. 300 US Army volunteers, buried in a mass unmarked grave in the middle of what is now the Delaware Park Golf Course.

About 300 soldiers, who came to Buffalo to protect our national border during the War of 1812 and died of hunger and disease as they spent the winter of 1814 in tents in middle of what is now Delaware Park– but what was then America’s frontier.

In 1814, The Village of Buffaloe was described by one visitor as “a nest of villains, rogues, rescals, pickpockets, knaves, and extortioners.” 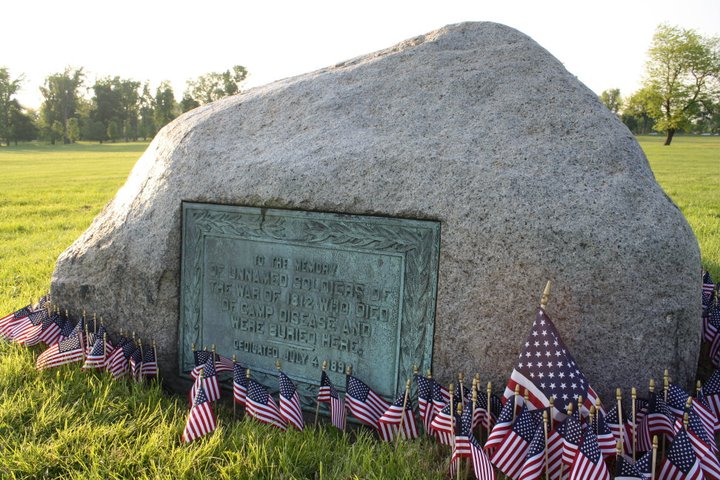 But it was volunteer soldiers from Virginia, Maryland, and Pennsylvania who’d marched to Buffalo to invade British Canada and defend Buffalo and Black Rock from invasion.

When winter came, they stayed. Wearing light summery uniforms and no winter boots, they lived in open ended tents. It was a particularly brutal winter, and food was slow to make it to the Camp at Buffalo, which was literally the end of the supply line. The food that did make it here was never enough and usually rancid.

Soldiers were dying up to ten a day, and with the ground frozen, the dead were first buried in shallow graves, then eventually just left in tents.

What was left of the army left Buffalo when spring came, but not before paying for three-hundred coffins and for two local men to bury the 300 dead– which they did, in what is now the Delaware Park Golf course.

They remain buried there to this day, a bolder in the middle of the golf course marks the spot where the 300 nameless, faceless men, who died here protecting our country, were laid to rest 204 years ago.

Their sacrifice was remembered this way when that boulder monument was dedicated in 1896:

May their noble example and this tribute to their honor and memory prove an incentive to future generations to emulate their unselfish loyalty and patriotism, when called upon to defend their country’s honor, and if need be die in defence of the flag, the glorious stripes and stars, emblem of liberty, equal rights and National unity.

More: The Mound in the Meadow: Buffalo’s Tomb of the Unknowns