Those who loved him, appreciated his contributions to Buffalo’s formation as a city, and his involvement in the creation of dozens of institutions from UB to the SPCA to the History Museum… in death, they called him M.F.

There are also those who look upon his signing of the Fugitive Slave Act and his later lack of enthusiasm for the northern cause toward the end of the Civil War and call him M. F.

It’s nice that we can all agree about what to call Millard Fillmore on this, the 219th anniversary of his birthday.

I tend to agree with both interpretations. HB, MF.

When our 1880 map of Buffalo was first printed, Millard Fillmore had died only six years earlier and was someone who would have been a familiar city father among the people of Buffalo.

After moving as a teen with his father from central New York to East Aurora, Fillmore taught high school and was admitted to the bar. He was elected to the state Assembly, and after three terms, moved to Buffalo, where his burgeoning law practice could thrive. He moved to Buffalo in 1832, the year Buffalo became a city. Fillmore helped write the charter.

As Fillmore was elected to Congress, then to state comptroller and then, eventually, to vice president, he lived in the home pictured above on Franklin Street between Huron and Mohawk.

Even for several years after leaving the White House in 1853, the Fillmores continued to live in the same Franklin Street home.

In a city sadly filled with parking lots where important buildings once stood, the house where Millard Fillmore lived while elected vice president was razed in 1929 to “make room for a parking station.” The Franklin Street YWCA Headquarters was built on the spot in 1952.

In 1858, Fillmore moved to a grand mansion a block south on Niagara Square. The larger Fillmore residence became the Castle Inn Hotel after his death in 1874.

That building was demolished in 1921 to make way for the Statler Hotel – which was the largest hotel in the country when it was built.

During the years that Fillmore lived in Buffalo following his presidency, he continued to follow the tradition of the time and not return to business. Instead, he became intricately involved in the affairs of building many of the great institutions of the growing city.

Aside from helping write the city charter, Fillmore also was one of the founding principals of UB, the Buffalo Historical Society, the local SPCA, the homeopathic hospital that eventually bore his name and dozens more endeavors.

But now, and even in his own time, many of Fillmore’s accomplishments have been heavily overshadowed by his stance on slavery. While he was personally against slavery, he didn’t feel the federal government had any jurisdiction in eliminating it. Moreover, as president, he signed the Fugitive Slave Act of 1850, which greatly hampered the ability for slaves to escape to freedom.

Fillmore’s Niagara Square home made national news when Buffalonians showed their displeasure with the ex-president.

At the start of the Civil War, Fillmore solidly backed President Abraham Lincoln, even commanding a section of volunteers too old to fight at the front lines, but trained to protect Buffalo in the case of an attack.

Fillmore, however, lost confidence in Lincoln and eventually backed Democrat George McClellan for president, with the understanding that McClellan would have worked to reunite the country, even if it meant slavery would survive.

When Lincoln was assassinated, homes and businesses in Buffalo and around the nation were covered in black bunting and American flags. Fillmore’s house on Niagara Square was a notable exception. Pro-Republican newspapers around the country reported that in reaction to Fillmore’s lack of decorum, a mob flung ink (or in some reports mud) on his home. Many of these reports were gleeful, a few just crude. But the partisan reports were “fake news” 150 years before the term was coined.

In 1932, Buffalo was swept up in the celebration of the city’s centennial, and many groups and organizations that had existed through those 100 years took the opportunity to celebrate their own existence as well.

The Buffalo Academy of Medicine — particularly proud that Buffalo’s first mayor, Ebenezer Johnson, was a medical doctor — wrote a lengthy history of the practice of medicine from Buffalo’s frontier days right up to the most modern advances 1932 could offer.

The most interesting part, however, might not be that dryly written narrative,  but the index of hospitals open in Buffalo in the centennial year. 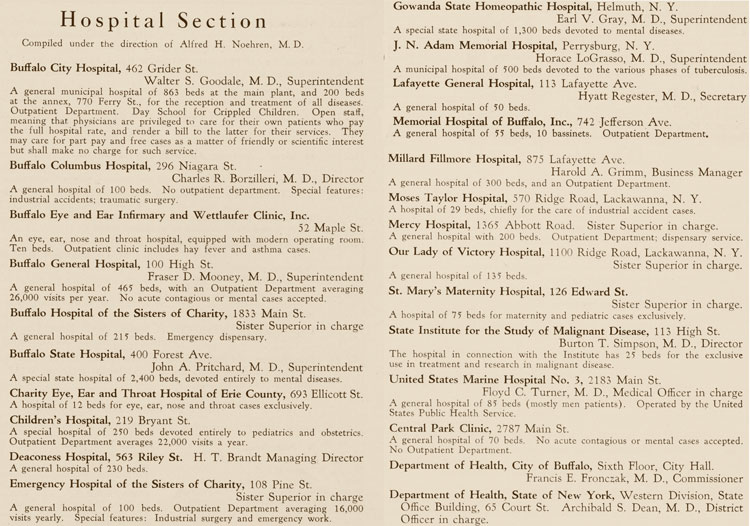 The directory offers a glimpse of medical care in a different era: the J.N. Adam Memorial Hospital devoted to the “various phases of tuberculosis.” The Moses Taylor Hospital in Lackawanna “chiefly for the care of industrial accident cases.” Buffalo State Hospital, “a special state hospital of 2,400 beds devoted entirely to mental diseases.”

Several of the hospitals also took out ads in the booklet — they give a look at some of the hospital buildings around Buffalo as they stood 85 years ago. 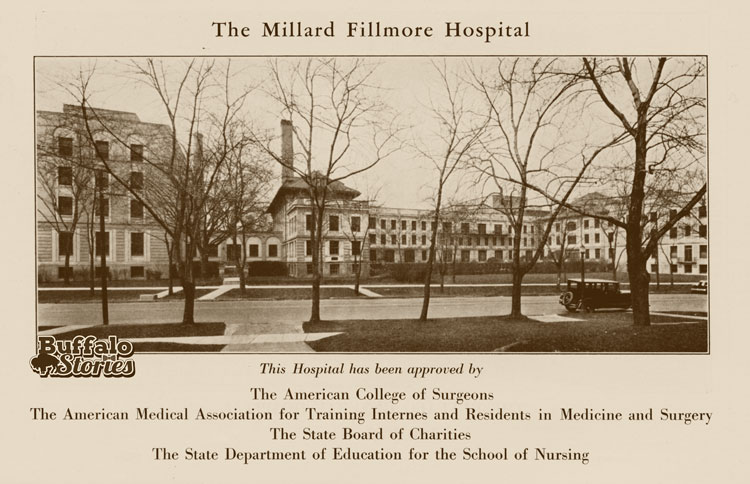 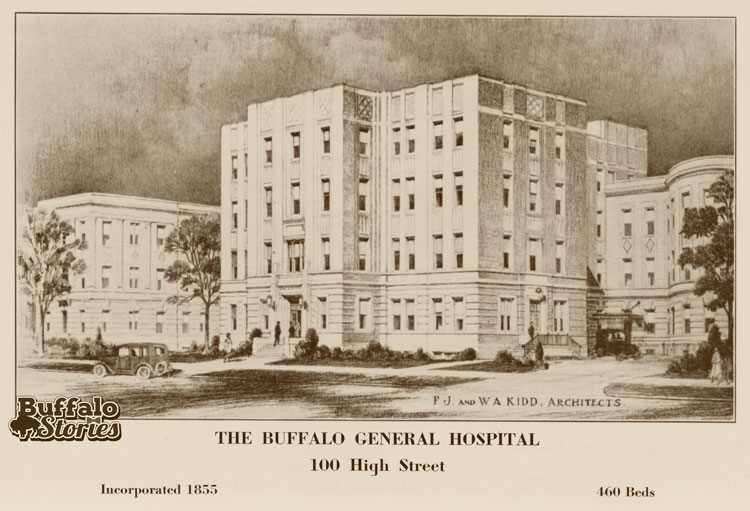 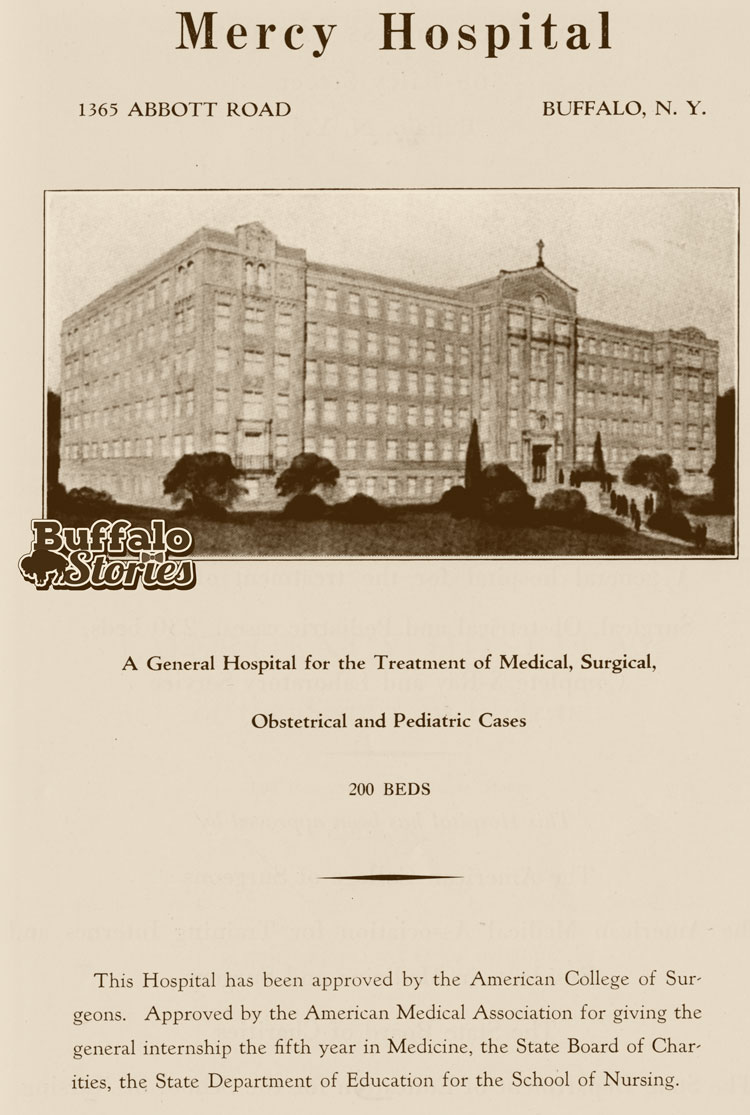 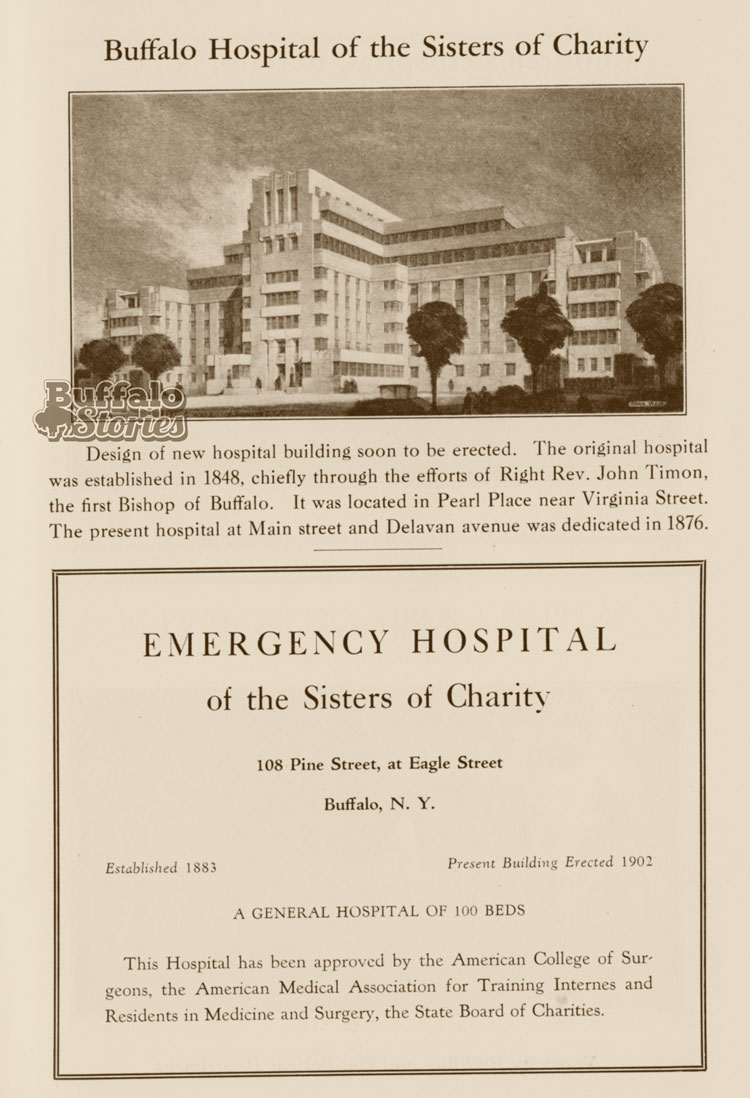 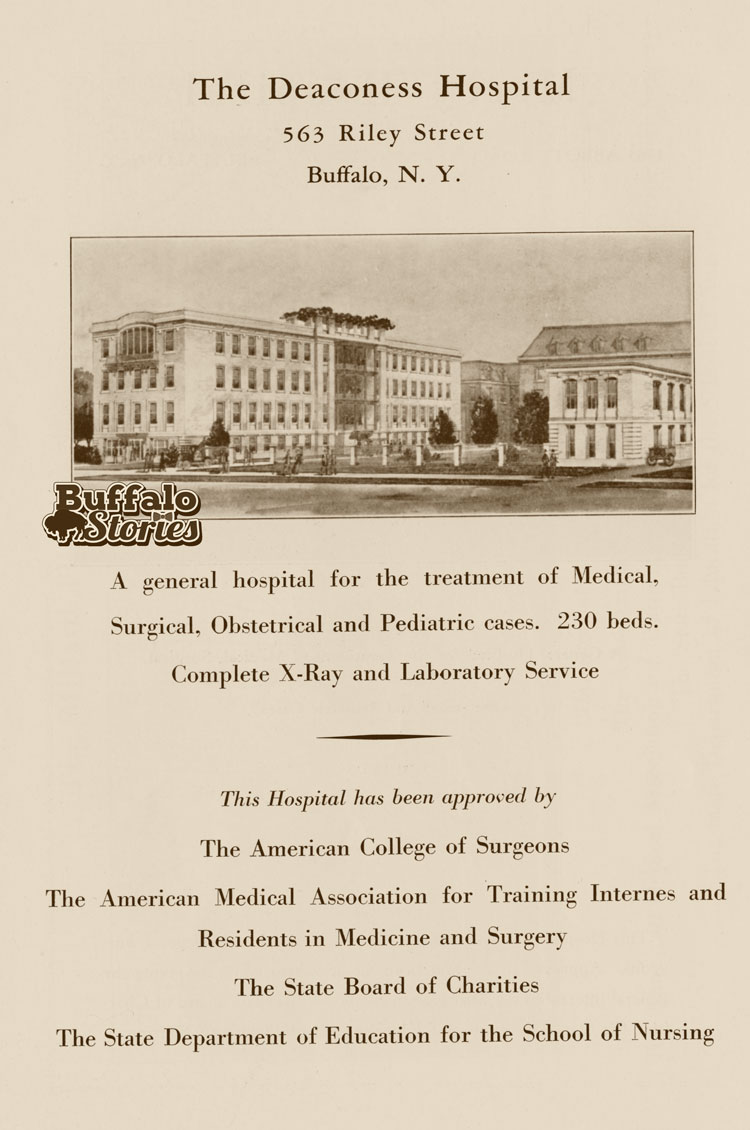 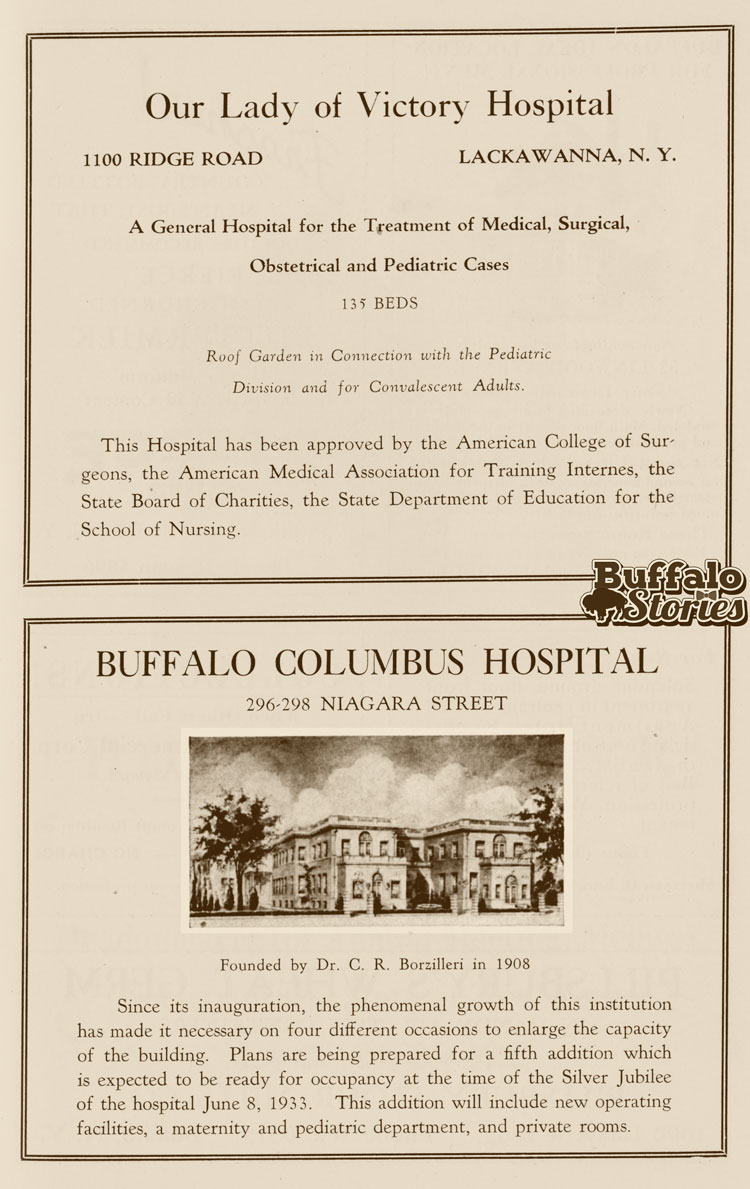 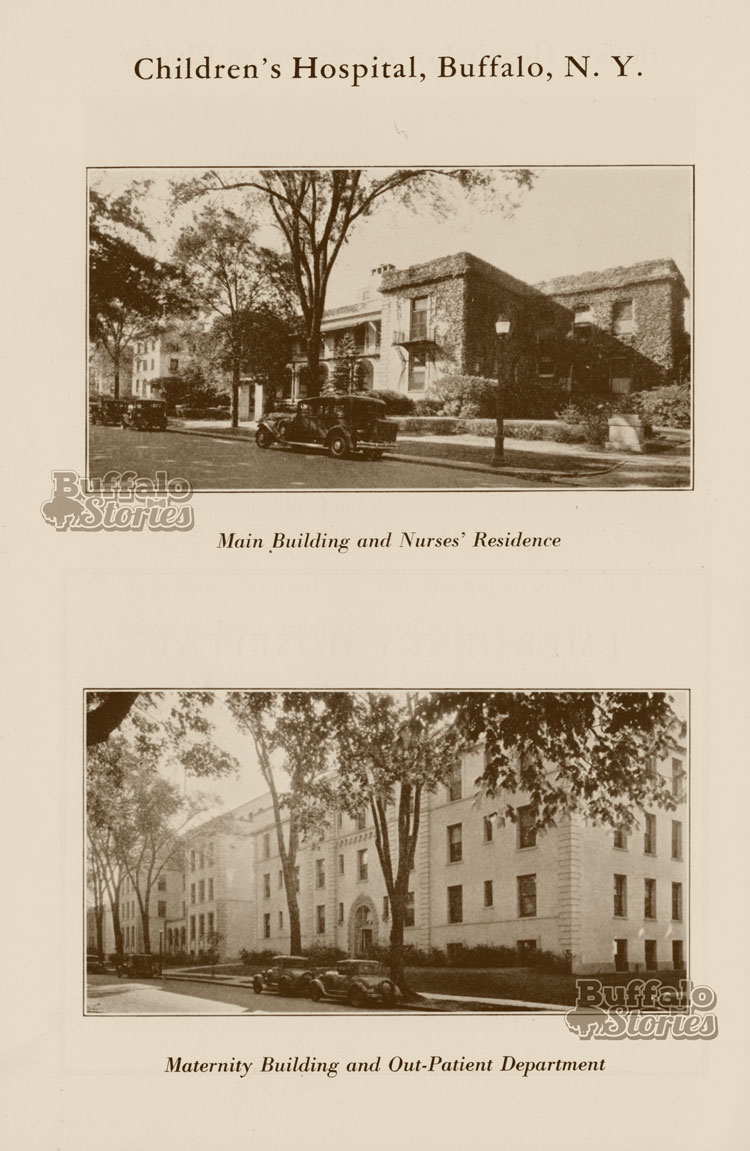 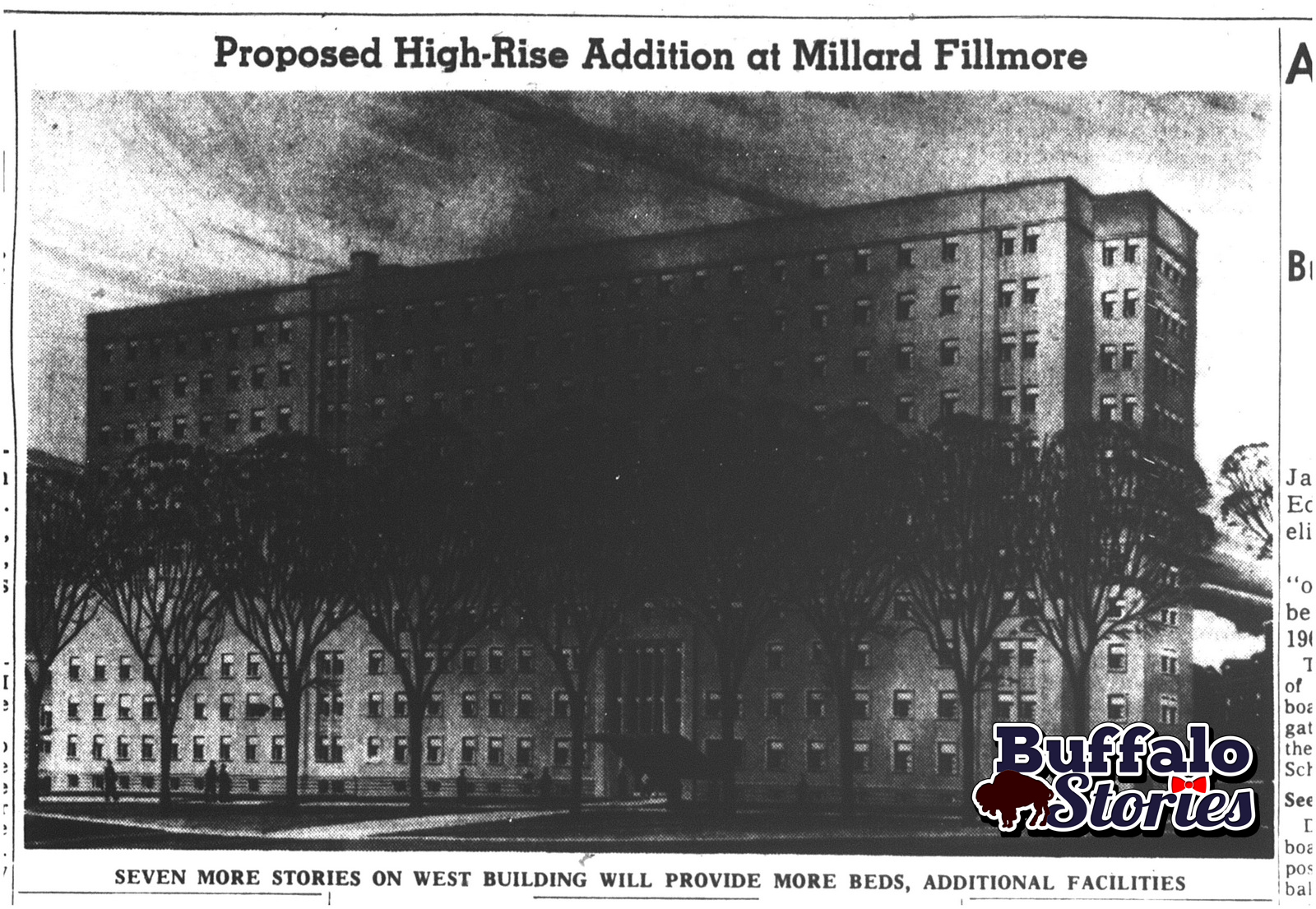 As Buffalo waits with great excitement for the implosion of the Millard Fillmore Gates Circle Hospital on Oct. 3, 2015, and controversy swirls about what might be built in its place– 50 years ago, additions onto the old Millard Fillmore Hospital were ushering in “an era of great change in healthcare,” just as the abandoning of Gates Circle for the Medical Campus did several years ago.