At the time, M&T President Andrew Craig called it “the most extensive and far reaching effort in the history of Buffalo aimed at upgrading and improving Buffalo’s image.”

Even when it was new– and especially now, to the outsider — the “We’re Talking Proud” jingle and TV spot were at best lampoonish and cheesy. For Buffalonians, however, the song is a communally understood representation of our complex feelings about our hometown.

Most of us have an unusually fierce love and loyalty for Western New York, even for what outsiders might perceive as bruises and warts. We’re proud of our snow and our blue collars, but protective against people who might not understand or who understand but hold their noses aloft at our “quaintness.” 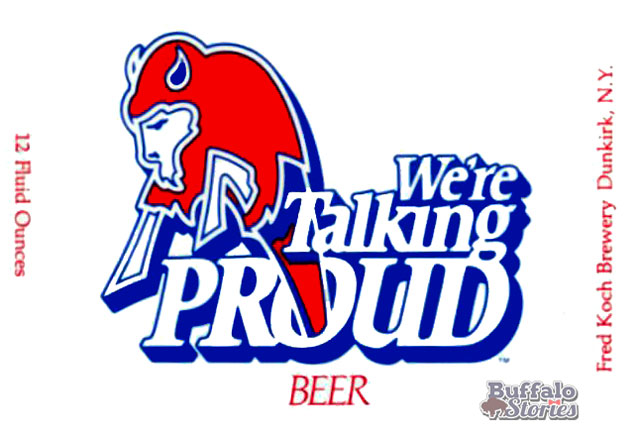 The whole campaign was created to help us coalesce those feelings as a community. Surveys showed people wanted to stay in Buffalo, and loved the fact that it was relatively cheap to live well here. People loved the number of restaurants, the abundance of cultural and pro sports events, running the gamut of taste and price. 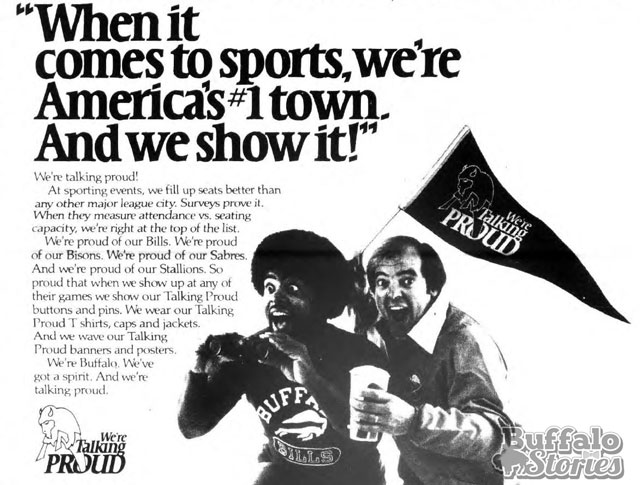 But in 1982, Buffalo’s unemployment numbers hit 15.3 percent, in the same year that Bethlehem Steel announced the shuttering of what was once the world’s largest steel manufacturing facility, and once the home of more than 20,000 jobs.

“The problem is (the people of Buffalo) don’t know too many facts about why they’re proud, and they’re sort of backward about standing up for their city,” campaign chairman Robert J. Donough told the Associated Press three months after the launch.

But even trying to capture the spirit of the campaign, the AP writer had to report some, cold hard facts. “With its numerous dingy buildings and empty storefronts, the downtown area remains a depressing shock to the first-time visitor.”

Donough told a different group, “We found we had to give (Buffalonians) something to talk about. So, at this point, we began to develop the Talking Proud campaign.” 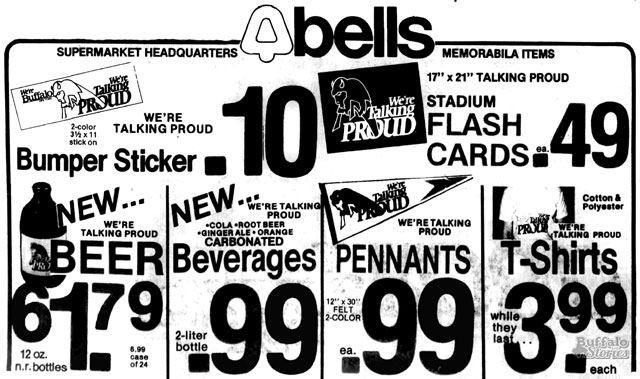 At the high point, the Talking Proud logo was licensed to 85 firms producing 135 products, from lollipops to an $11,000 Buick Regal furnished as a rolling testament to pride in Buffalo. 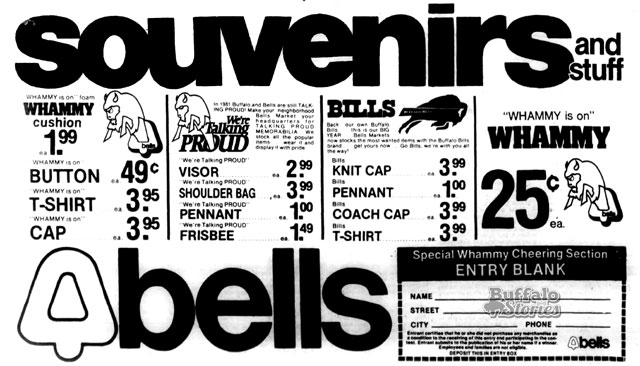 The television ads were romp and pomp, and happy and high-flying, but the print ads, featuring small groups of Buffalonians, were a bit edgier.

“We’ve got a spirit and we’re talking proud…. We’re fed up with all the insults, all the jokes about our city. We Buffalonians have had it right up to here. We’ve got one of the best communities in the world.

Western New Yorkers were keenly aware of the problems at home—and for quite some time had been tired of hearing about those problems from outsiders.

It started as early as 1969, with a scathing piece as much about Buffalo as the Bills in Sports Illustrated. San Francisco sports writer Glenn Dickey made a city full of enemies for life as he was quoted calling Buffalo the “armpit of the East.”

Even Howard Cosell, often derided for his sports analysis, specifically inspired the ire of Western New York with a jibe insinuating that Buffalo was a lesser “clone of Cleveland” on a Monday Night Football broadcast.

One Buffalo jab blew a bit out of proportion, but wound up with kumbaya.

In 1981, the Chinese owner of the Hilton, Clement Chen, was planning to build a hotel for Americans in Beijing, so he brought a delegation of Chinese chefs to train in American cuisine at his Buffalo hotel. CBS Newsman Morley Safer, who found the notion of Chinese chefs training in Buffalo “marvelously incongruous,” wrote a tongue-in-cheek commentary that was likely funny to most of America, but not to Buffalo—where jokes about Love Canal and the lake being dirty have never played well. Safer spoke of “the more than aromatic shores of Lake Erie” and said that Buffalo’s “greasy and impenetrable” “chemical cuisine” would result in “international ill-will.”

Thousands of letters from Buffalo later,  CBS president Gene Jankowski, a Buffalo native, “urged” (strong-armed?) Safer into accepting the invitation of the Chamber of Commerce to visit Buffalo.”My impression of this city has certainly changed,” the newsman said as he toured. “I wrote in my commentary about the mythology and now I’ve seen reality. You’ve just won a fan.” 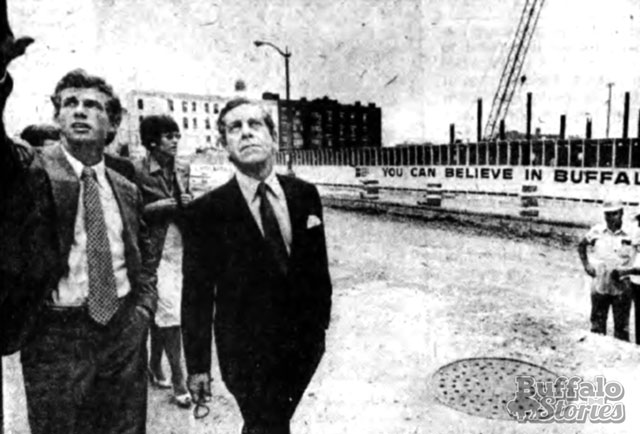 Later that morning, he told a throng outside One M&T Plaza, “This whole thing started in fun and I was determined not to apologize. But after one of the most gracious and spectacular mornings of my life, I must say I am sorry.”

“Talking Proud” was great for Buffalonians and showed outsiders that we cared. But in national talk about the juggernaut, more people echoed the negative notions the campaign was meant to dispel.

US News and World Report said the campaign was conceived to “disprove outsiders’ cruel jests picturing Buffalo as an urban desert.” TV Guide said the bright music and happy marching was “in contrast to Buffalo’s coldly forbidding image.”

Again, the print ads were far more succinct than the happy jingle.

“Give it to ’em, Buffalo. We’ve got an earful to tell America about living here.

“For starters medical care, food prices and home costs are among the lowest anywhere. So are our crime rates. Our schools are some of the best. Plus we get a gentle prevailing wind off our lake that gives our city four distinctive weather seasons and some of the best pollution-free air around.

“Sure, some of us moved out of Buffalo. We tried other cities like Chicago, San Diego, New York, Houston and Memphis.

“Funny thing, America, a lot of us moved back. We missed the short commuting times to work. And the cheap parking rates. We missed Buffalo’s unique nightlife. We missed quiet places like Delaware Park, the Marina. We missed neighborhoods that pull together, stay together and are being restored and renewed together.

“In short, America, we think the quality of life around here is better than a lot of places you offer.

“So we’re speaking our piece. Because we’re Buffalo. We’ve got a spirit. And we’re talking proud.”

There were many people who can take credit for giving life to the “Talking Proud” campaign.

Fred Dentinger, the great Buffalo philanthropist, was chairman of the Buffalo Chamber of Commerce when he championed the notion of defending Buffalo against naysayers, and even going on the offensive if necessary. A few years later, Dave Smith was in charge at the Chamber, and joined by PR man Pat Donlon, laid the ground work for “Talking Proud.”

They hired Alden Schutte, the great ad man and artist, who oversaw the creation of every facet of the campaign.

Then there’s the actual voice we can easily hear in our minds without trying too hard. Teresa Giles, still hailed as one of Indiana’s premier session singers, was described as a “27-year old farm girl” when credited with singing the original track, recorded at Wolftrack Studios in Indianapolis.

The personification of Talking Proud, however, had to be the exuberant young actress selected to star in the TV spots. 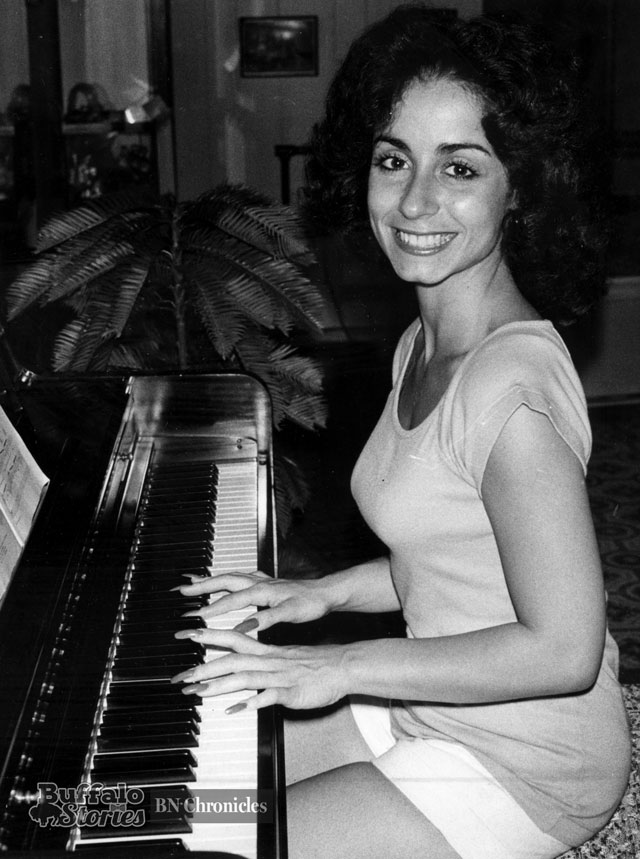 Terry Licata-Braunstein has been seen in films like “Raging Bull” and “Hide in Plain Sight,” and on the small screen in “Law & Order.”

Terry Licata grew up on the West Side, and had tried out for a role in an AM&A’s commercial. That didn’t work out, but producer Schutte remembered her, and the rest is history. 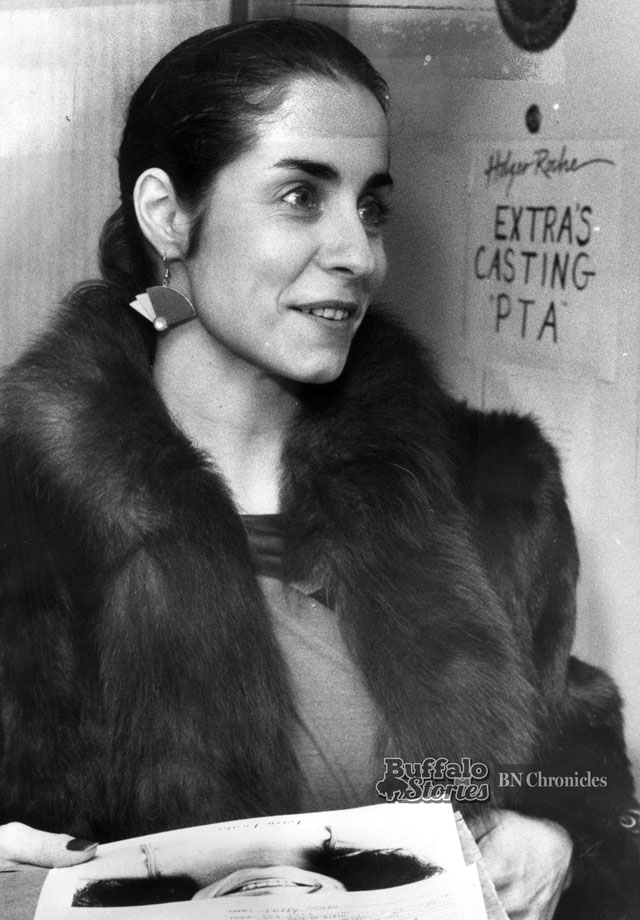 More on “the high-stepping, diminutive lady in the red jumpsuit leading a throng of chest-thumping Buffalonians” from News Reporter Harold McNeil: ‘Talking Proud’ cheerleader still struts her stuff on screen

There’s also Joe Cribbs, Chuck Knox, Joe Ferguson, and the early ’80s Bills. When the Bills beat the defending Super Bowl champion Pittsburgh Steelers and the “Talking Proud” song blared from the Rich Stadium sound system, 80,000 people danced and sang.  And we haven’t stopped showing that “Buffalo’s got a spirit” ever since… talking proud, talking proud.