If Buffalonians know anything about the old Birge Wallpaper Company on Niagara Street, chances are they know that one of Buffalo’s great artists worked there. Charles Burchfield first came to Buffalo as a wallpaper designer for Birge in 1921, but the Birge family was well-known in Buffalo in its own right.

Martin Birge came to Buffalo in 1835 and started a general store in the 200 block of Main Street near Seneca Street. A decade later, he started a “new paper hanging warehouse,” making French and Italian wallpapers available in Buffalo for the first time. In 1877, he founded M.H. Birge & Company and soon became world-renowned as a manufacturer of wallpapers.

During his earliest days in Buffalo, Martin Birge was “a familiar sight along Main Street, with his immaculate suit of broadcloth, beaver hat, and gold headed cane and great dignity of manner.”

A generation later, his son George K. Birge was one of Buffalo’s leading citizens. He was not only president of his family’s company, but also president of the George Pierce Company – the makers of the Pierce Arrow luxury automobiles used by presidents and movie stars. The Georgian Revival mansion he built in 1897 on what we now call Symphony Circle remains as one of Buffalo’s architectural treasures.

He was a leader in industry and civic affairs. In a 1918 obituary, the Buffalo Times called Birge “one of Buffalo’s most spirited public citizens.” He was a major donor to the American Red Cross and First Presbyterian Church, which was located just across the street from his home. He was on the executive committee of the Pan-American Exposition and was the leading proponent in the efforts to have a highway built from Buffalo to Niagara Falls. That highway, Niagara Falls Boulevard, remains a lively part of life in Western New York.

The first Birge Wallpaper store opened near Main and the Terrace in 1846, in a spot now covered by the elevated I-190. A few years later, there were relatively few wallpaper factories in the country when Birge opened a plant on Perry Street near Washington Street in the old Tifft Furniture Manufactory. That spot is currently pretty close to center ice at KeyBank Center.

After two fires gutted two different factories, Birge moved into the Niagara Manufacturing on Niagara between Maryland and Hudson streets. During the year Burchfield joined Birge, 1921, that Niagara Street factory was described in the Buffalo Courier as “a veritable modern wonderland, peopled with real art craftsmen, artisans who have devoted their lives to this calling which requires a highly developed sense of artistry and painstaking accuracy.”

Birge remained one of the most respected names in wall coverings, until tastes began to change and wallpaper was no longer fashionable. The Niagara Street plant closed in 1976; a McDonald’s now stands on the site.

Barton’s father was partner with Peter Porter in the firm Porter & Barton, which established the Black Rock port as a center of trade and commerce. Black Rock was an early favorite as the terminus of the Erie Canal, especially with Peter Porter serving in Congress at the time the negotiations were happening in the early 1820s.

When the canal came to Buffalo instead, the younger Barton created a partnership with Judge Samuel Wilkerson, who was the champion in Buffalo’s canal efforts. Barton used both Buffalo and Black Rock harbors to create an early shipping monopoly along the Niagara River.

As postmaster, Barton had a somewhat captive retail audience to look at his wares.

The early pioneers of what is now Black Rock, Buffalo’s upper West Side and North Buffalo would have had to pick up their mail at the Black Rock Post Office, which moved several times through the years as different men were named postmaster.

When this building at the corner of Niagara Street and Auburn Avenue was the Black Rock Post Office, it was the home and office of Dr. Morgan G. Lewis. Aside from being postmaster, Lewis was also a physician, health inspector and village treasurer. As a colonel in the U.S. Army, Lewis also helped negotiate peace treaties with 13 Native American tribes near the Brazos River in Texas, including the Comanche, Waco and Wichita in 1846.

Lewis was, according to his obituary in The Advocate, “a leading man in the part of the city where he resided, and highly respected wherever he was known.” It’s assumed that the post office moved from this spot when he died in 1858.

Forty years removed, it’s still evident if you think about it — despite all the death, destruction and jokes, Buffalonians enjoyed the Blizzard of ’77.

On the storm’s first anniversary, University at Buffalo researcher Arthur G. Cryns released a report that outlined the results of a detailed survey of 104 random Western New Yorkers.

By now this anniversary week, you’ve become reacquainted with the numbers. There were at least 23 deaths, 13,000 people were stranded away from home and 175,000 workers lost $36 million in wages.

“The blizzard furnished a considerable proportion of area residents with a welcome reprieve from the routines and obligations of everyday life,” Cryns told the Associated Press in 1978. “Others found occasion in the storm to celebrate and have a good time.”

Cryns’ survey also found that while Buffalonians still held a generally positive outlook on area weather, it was also clear that most people would be more cautious and more vigilant for future predictions of snow emergencies. That prediction has proved true.

The survey might now even have been necessary, as on that first anniversary of the blizzard, Buffalo held the first Blizzard Ball.

Allentown antiques and art dealer Bill Eaton was one of the founders of the Blizzard Ball, which ran for every year for a decade and a few later anniversaries of the storm as well.

“Maybe the blizzard was lousy for business and plenty of other things, but it brought out fellowship in the people of Buffalo,” Eaton told The News in 1978. “Most of us had fun. Got to know one another better.”

Exactly two weeks after the blizzard had started, an editorial in the Buffalo Evening News wrapped it up this way:

“The fact remains that the people of this area were put to an extremely rugged test, which they passed with courage, character and good humor. And that, too, ought to become a permanent part of the Buffalo legend and image associated with the Blizzard of ’77.”

Read more about Buffalo’s Blizzards past from Buffalo Stories 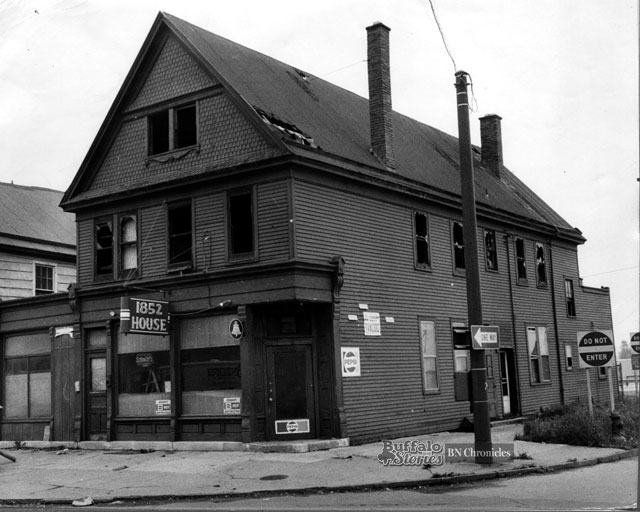 The Connecticut Street Armory is an imposing presence on the West Side, known for decades more as a home for car shows, punk rock concerts, and proms.

But of course, it’s primary function remains as a home of the New York National Guard and the longtime home of the 174th Regiment. It was also there on Niagara Street where the 174th was activated to train for service as the country readied for World War II.