By the time he opened the “Invalids’ and Tourists’ Hotel” at Porter and Prospect avenues in 1878 on the West Side, Dr. R.V. Pierce had long run a mail order quack medicine dispensary from Buffalo and had also been elected state senator.

“There is no quarter of the civilized world where his remedies aren’t known,” said The Buffalo Express upon the completion of the building. Pierce chose Buffalo as his base of operations because, The Express reported, that statistics “prove dispute that Buffalo outranks in healthfulness all other cities of the United States.”

The paper called the finished hotel “superb in its completeness, one of the proudest ornaments of a city famed for its beauty.”

The piazzas and grand porches of the building provided stunning views of the Niagara River and Lake Erie, and newspaper accounts printed around the country gushed about “bath appliances of all sorts, a steam elevator, and a fully furnished gymnasium.”

As the name would imply, the campus was split into two distinct sections. One for summer tourists and “a pleasant and cheerful home for invalids in search of health in a delightful, bracing and invigorating climate.”

“Chronic diseases of every sort will be treated in the sanitarium,” reported The New York Times.

Like many of Buffalo’s grand structures of the era, it was destroyed by fire in 1881. The site is now a part of the D’Youville College campus.

For many decades following, Dr. Pierce’s hotel and dispensary were on the 600 block of Main Street opposite Shea’s Buffalo. The Pierce Building still stands there. 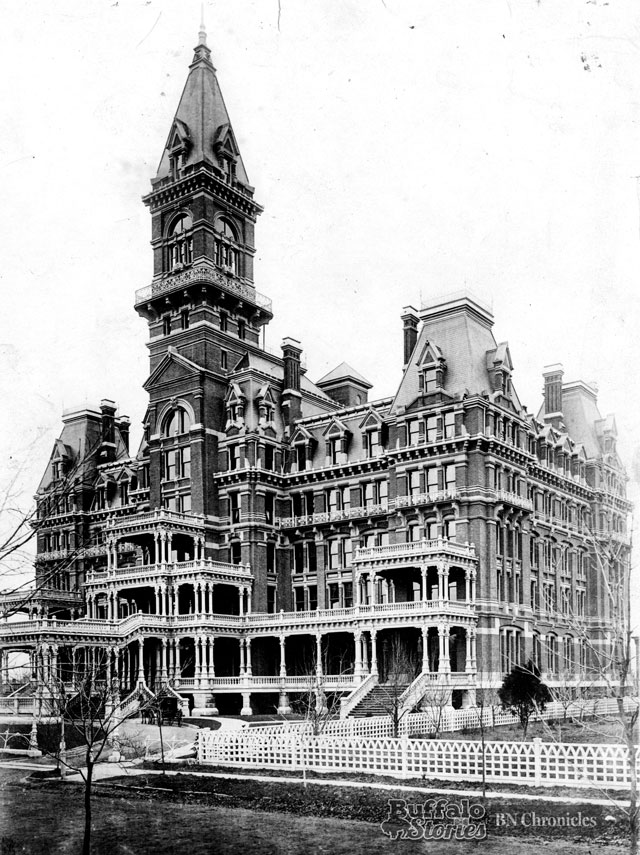 Opened in 1877, the place was half hotel, half hospital. Two generations of Pierces were known for the sale of patent medicines and the cutting-edge “curing” of disease. The baths and gymnasiums on the campus were known nationwide for their healing and restorative powers. 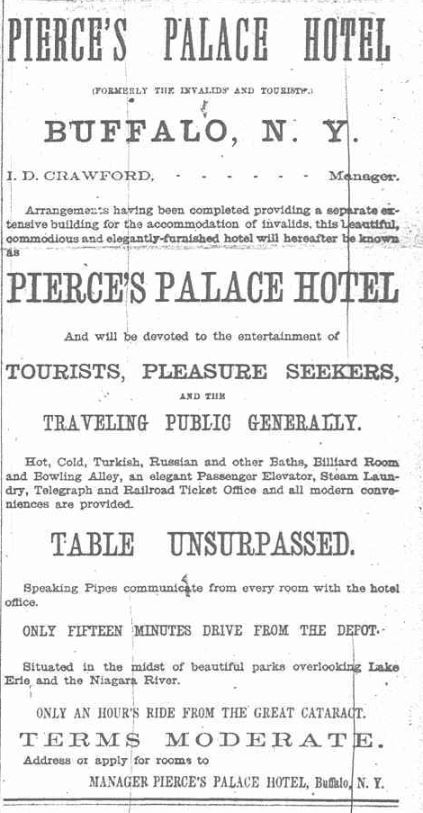 It was from the Prospect Avenue balcony of the Palace Hotel that Buffalo industrialist Frank Baird introduced Gen. James Garfield to Buffalo shortly before he was elected president in 1880. The throng of people welcoming the candidate stretched from the Central Depot at Terrace and Court (behind today’s City Hall) all the way to the hotel. President Ulysses S. Grant was also a guest at the Palace.

Pierce’s Palace Hotel was open only four years before it burned down in 1881. After that, Pierce opened his Invalids Hotel and Surgical Institute on the 600 block of Main Street; that survived until 1941.