On the day Phil Housley was named the Sabres Head Coach, a quick search for WOWIE HOUSLEY netted nothing… So I had to dig into the archives and post fresh it myself.

Listen… as Rick Jeanneret calls a Phil Housley goal for the Buffalo Sabres in the 1988-89 season, with ROCK’EM SABRES setting the proper 1980s Sabres mood.

Audio and images from the Buffalo Stories Archives/Steve Cichon collection.

With the Sabres flying high, rest assured I’ll be dipping into the Sabres Archives quite a bit on this blog… This time, we’re going back to the late 80’s with a pair of sound files. 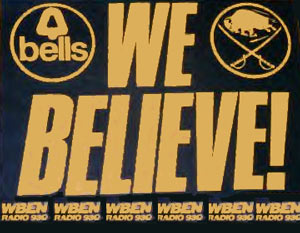 This is a 60 second verision of the Rock Em Sabres Jingle, paired back-to-back with WBEN’s “We’re Here, We Care” song. That edit is taken directly from the reel that used to play over the Aud Speakers before game time. 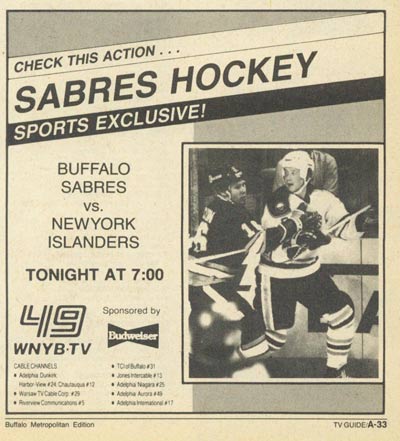 The second sound clip is a commercial for WNYB-TV 49– the Television Home of the Sabres before the Empire Sports Network. This spot promos a West Coast Trip, with a game against the Stanley Cup Champion Oilers, as well as a game against the Flames. The announcer voice on the spot is that of Steve Mitchell… And of course the play-by-play clips feature Ted Darling.