The removal of the Sheridan Drive pedestrian bridge is stirring memories of the generations of kids who ran across the bridge in anticipation of a jump into the Delaware Pool.

Sheridan Drive was built as a “super highway” in 1925, connecting Clarence, Amherst and Tonawanda to the waterfront and to Niagara Falls via Niagara Falls Boulevard. The divided highway remained most rural and mostly in use for its original purpose until the postwar expansion of the 1950s brought a dramatic number of homes to the former farm country and the Youngmann Expressway became the preferred route for quickly crossing the suburbs just north of Buffalo.

More than 20 large subdivisions were either built or in the works by 1955, along with supermarkets like Park Edge, hot dog stands like Ted’s and Pat’s, and custard windows like Anderson’s.

To support the quickly growing area, the Town of Tonawanda built both Herbert Hoover Elementary School and the “glistening” Delaware Pool, both near Delaware Road on Sheridan.

The foot bridge over Sheridan Drive was conceived of only months after the opening of the pool. The $40,000 price tag was seen as steep in 1955, but also necessary to keep the free flow of automobiles along Sheridan Drive. A footnote in one 12-paragraph story in 1955 mentions the safety of the children crossing the busy highway, as well.

After years of bickering and a gubernatorial veto by Gov. Nelson Rockefeller, it wasn’t until 1965 – 10 years after the bridge was first proposed – that the state finally gave permission and some funding to allow the pedestrian bridge to be built. It was completed just in time for the 1967 school year.

The pool was such an institution, that the town sponsored a big celebration of the pool’s 25th anniversary in 1979, featuring synchronized swimming and salutes to those instrumental in the building of the pool.

Numbers of swimmers had dwindled dramatically from the glory days, but Tonwandans were still using the Delaware Pool until the early ’90s, when, in 1993, it was replaced by the Tonawanda Aquatic and Fitness Center in preparation for Western New York’s hosting of the World University Games.

The foot bridge across Sheridan Drive is being dismantled this week. It was closed following a state inspection deeming it unsafe in 2016.

When the brand-new Nu-Way supermarket opened in Niagara Falls Boulevard in 1955, the part of the “The Boulevard” just north of Sheridan Drive was still mostly farmland.

The map that accompanied the Nu-Way ad announcing the grand opening isn’t to scale, but it shows the landmarks on the rural stretch between Sheridan Drive and Ellicott Creek Road. The only highlights they could come up with were the drive-in and a radio tower.

The WXRA radio tower was closer to the plaza with Burlington Coat Factory, JoAnn Fabrics and Outback Steakhouse. The small station was licensed to Kenmore and is probably best remembered as the place where Tommy Shannon’s Buffalo radio career began.

If we were trying to describe the plaza where Nu-Way opened today, we might say across from the Boulevard Mall – but then, the mall wasn’t opened for another seven years. OK, then, you might say, “The Boulevard between Sheridan and Maple,” but Maple wasn’t extended from Sweet Home Road to Niagara Falls Boulevard until the early ’60s.

The Youngmann Expressway didn’t cross over then, work wouldn’t even start on the I-290 until the mall opened. New York State’s first McDonald’s, now near Maple, wasn’t opened until 1959. Same with the Henry’s Hamburgers at Sheridan Drive. The Swiss Chalet opened in 1965.

Nu-Way was the futuristic brand name for the 1950s-style supermarkets operated by longtime Buffalo grocer Danahy-Faxon.

Among the features at the new store were register receipts that listed your exact change and the “new convenient food-o-mat,” which was called “the latest in shopping convenience” as shelves restocked themselves as ladies shopped.

The Nu-Way brand name was eventually absorbed into Acme Markets, and in the mid ’70s, local Acme stores were bought out by Bells.

A snowstorm and a couple of jackknifed tractor-trailers had Sheridan Drive backed up from just after Harlem Road all the way to Niagara Falls Boulevard in this early 1960s photo.

The “C. Hettinger for Rambler” car dealership is in the foreground on the right – today, it’s about where Northtown Kia and Northtown Mazda are located. Charles Hettinger opened for business in the spot in 1960. 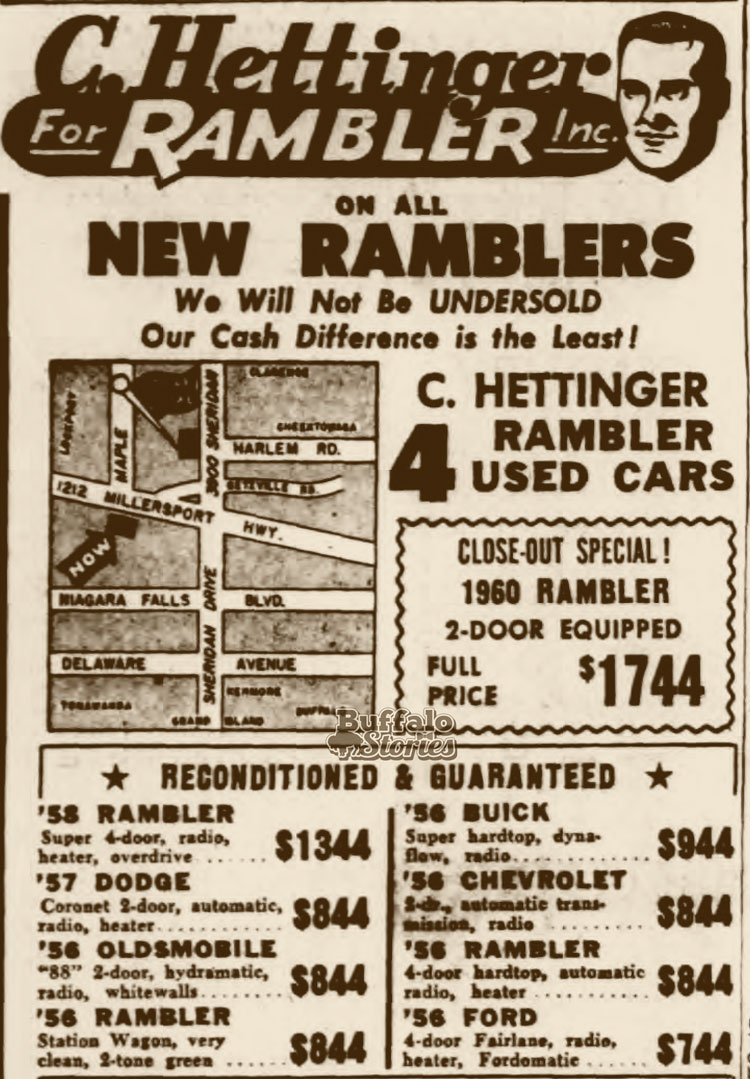 Next door, Herb and Burt Wallens opened Sheridan Lanes and its “broad expanse of 48 precision Brunswick Lanes” in February 1957. It was billed as “one of America’s finest bowling establishments, for your bowling pleasure” upon opening. 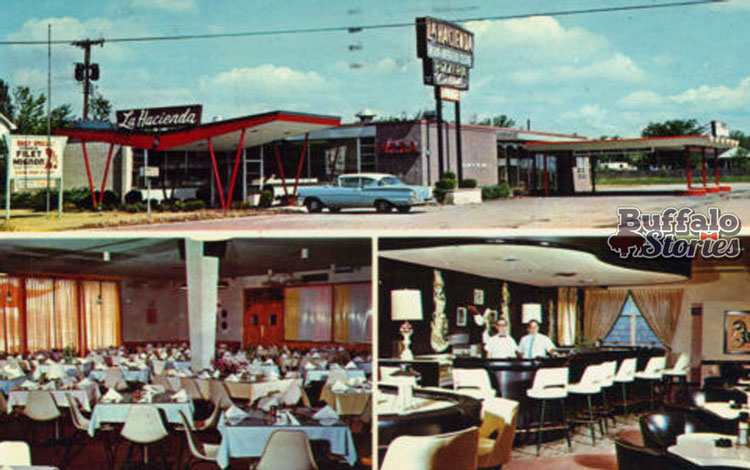 Beyond is Kinney Shoes and the final legible sign off in the distance, which belongs to the La Hacienda Sheridan Restaurant. 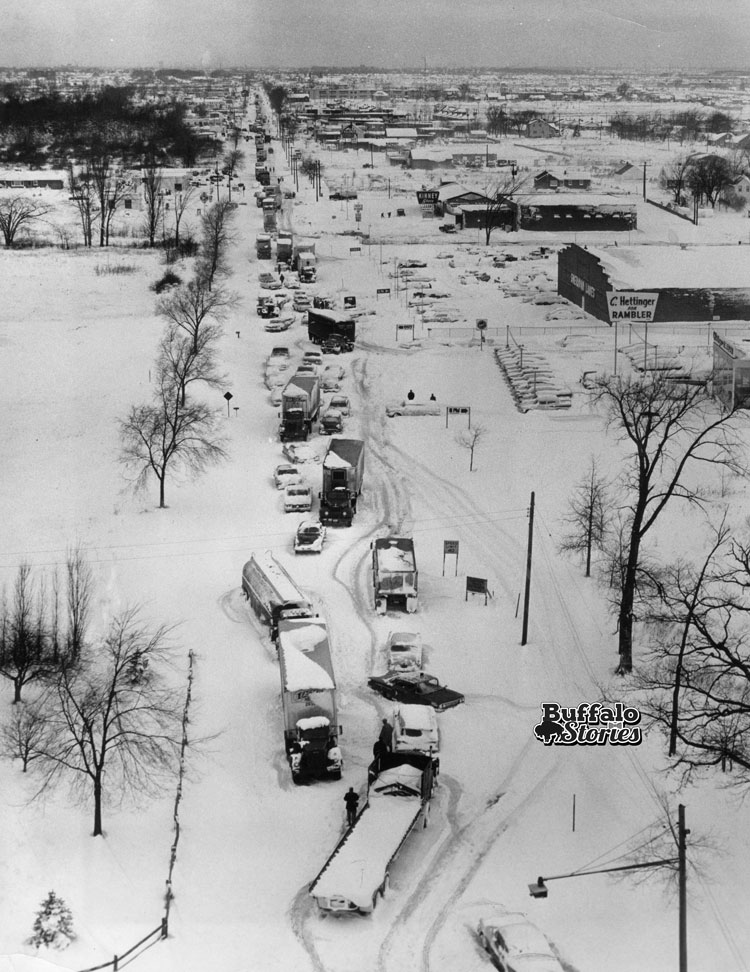 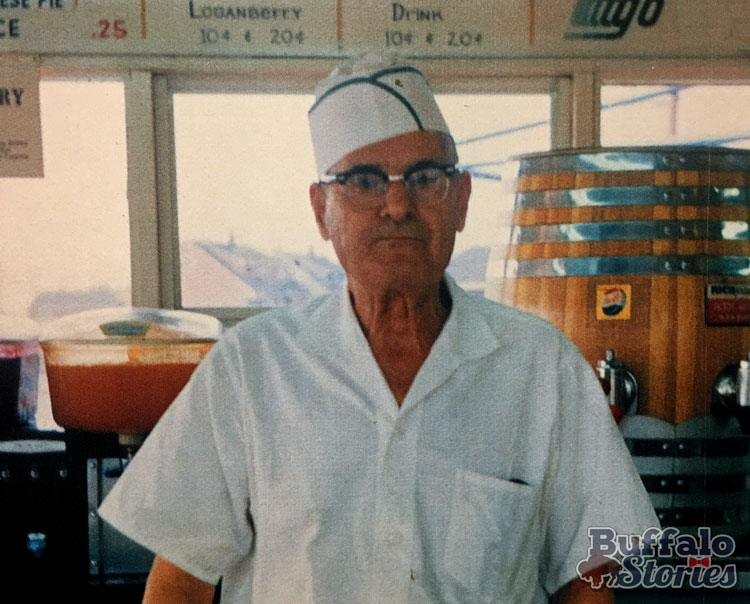 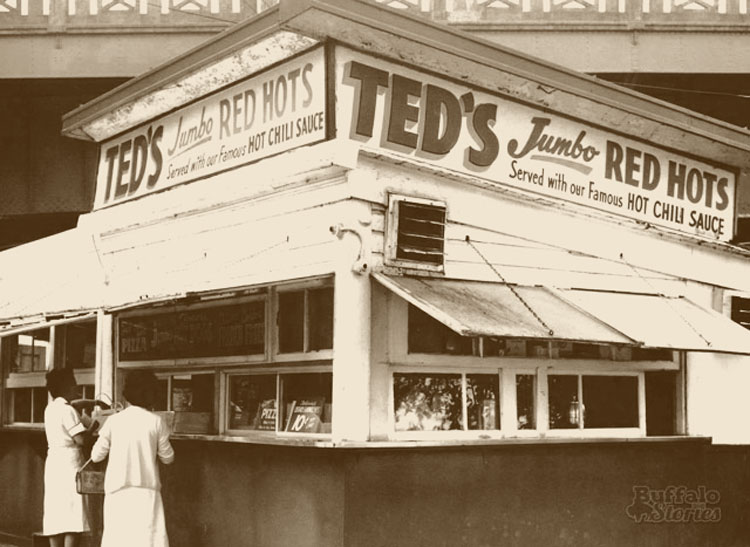 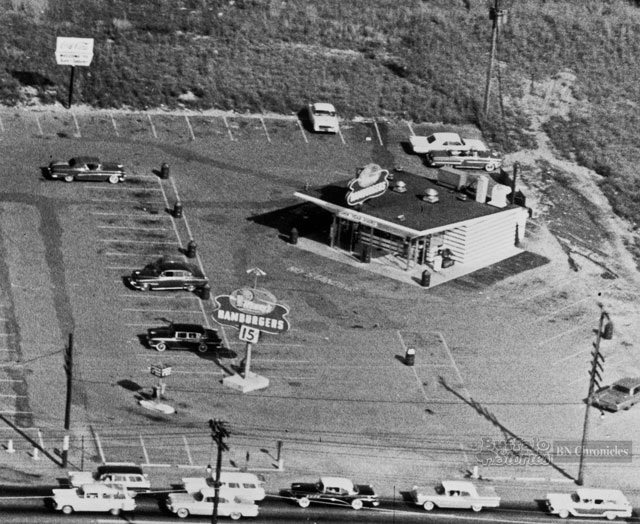 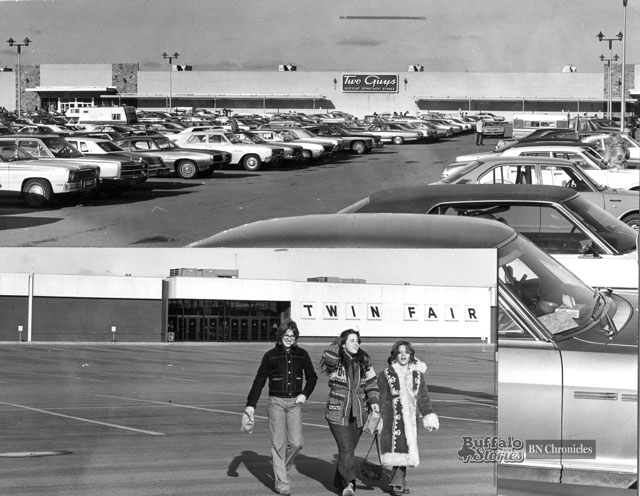