It seems like just about every Buffalonian has a story about being nearly frostbitten at a St. Patrick’s Day parade, and Bill and Mildred Miller – the longtime hosts of Channel 4’s “Meet the Millers” – are no different.

As they shared a recipe for Irish Soda Bread, they talked about lining up for the parade behind Memorial Auditorium getting ready to march up Main Street.

After two hours of waiting as the wind whipped right off the lake and into their faces, it was the coldest they’d ever been for a St. Paddy’s parade.

“Our eyes were so full of tears from the wind that we saw people along the parade route as if they were under water; our smiles were literally frozen to our faces.”

The Millers standing next to the Aud getting ready to join the parade in the late ’50s marks the halfway point in the parade’s long migration from its original route along what is now South Park Avenue up to Main Street, then over to Delaware Avenue in 1981.

“Not in 25 years have Buffalo Irishmen exhibited the same degree of enthusiasm for a parade, but this year, the spirit of the green seems to have gotten into their blood and all have put their hands to the plough with the intention of making the celebration one to be remembered,” reported the Buffalo Times in 1915.

“It is now possible for the Clare boys to go any place in ‘The Ward,’ ” reported the Buffalo Times, “including the district of the Corkonians. They’re all working together this year with St. Patrick as the toast, and no one is denying them the joy and pleasure they’ll obtain from the celebration.”

As for Bill and Mildred Miller, their idea of celebrating St. Patrick’s Day had more to do with the food, and revolved around corned beef, cabbage and Irish soda bread – all of which they would make on their daily show on Channel 4 during the week leading up to St. Patrick’s Day.

They started in show business as a Vaudeville dancing act. After settling down on a turkey farm in Colden, they began their daily cooking and interview show on Channel 4 in 1950.

Watching the Millers, especially in the kitchen, reminded most of a favorite aunt and uncle – loving, dedicated to one another, and forever bickering. Mildred was clearly in charge.

“That’s the way with those Millers,” wrote Sturgis Hedrick in the TV Topics in 1959. “Subtle. Blissfully naive, you might better say. Honest, sometimes we wonder if Bill and Mildred Miller actually realize there are people watching.

“They interrupt one another in their anecdotes and often work at cross purposes in their commercials.

“And yet they sail serenely along afternoon after afternoon, happy as any husband and wife, looked in on by an unseen audience. That audience is not only huge, but fiercely loyal. The curiosity lure of ‘what’s going to happen next’ makes ‘Meet the Millers’ a viewing must with the average housewife on the Niagara Frontier.”

They were seen every day at 1 o’clock through the early 1970s. After their retirement from television, Bill served as supervisor of the Town of Colden. 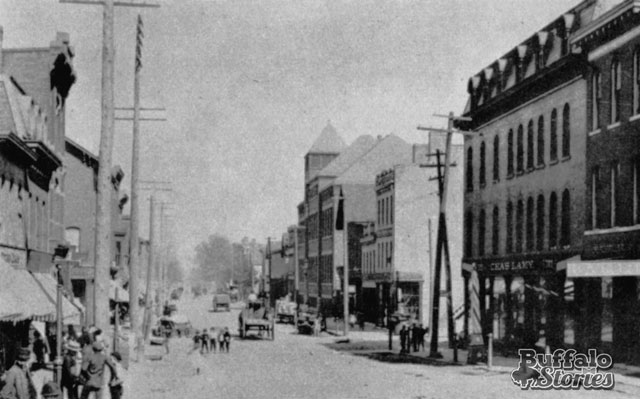