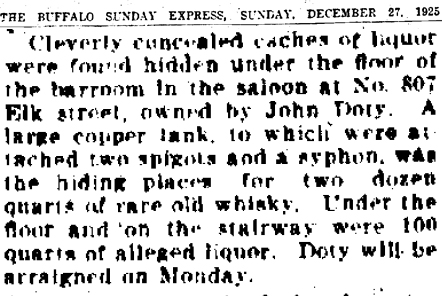 BUFFALO BOOZE BUST… Wouldn’t it have been great if Irv Weinstein would have been around to write Prohibition stories? The papers were filled with them almost every day.

I like this one in particular– because it took place in a bar my ol’man would buy 55 years later.

The text is a bit hard to read:

Cleverly concealed caches of liquor were found hidden under the floor of the barroom in the saloon at no. 807 Elk street, owned by John Doty. A large copper tank, to which were attached two spigots and a siphon, was hiding places for two dozen quarts of rare old whisky.Under the floor and on the stairway were 100 quarts of alleged liquor. Doty will be arraigned on Monday.

In the late 1930s, the path of Elk Street changed as South Park Avenue was created out of several South Buffalo and First Ward streets. What was number 807 Elk –at the corner of Smith Street– in 1925, is now 207 Elk (sadly, a vacant lot.)