Buffalo, NY – As the Catholic Church gets ready to make the first major changes to the Mass in a few generations, we now look back at the mass before the last big change, the granddaddy of ’em all… Those made at The Second Ecumenical Council of the Vatican, usually known as Vatican II. 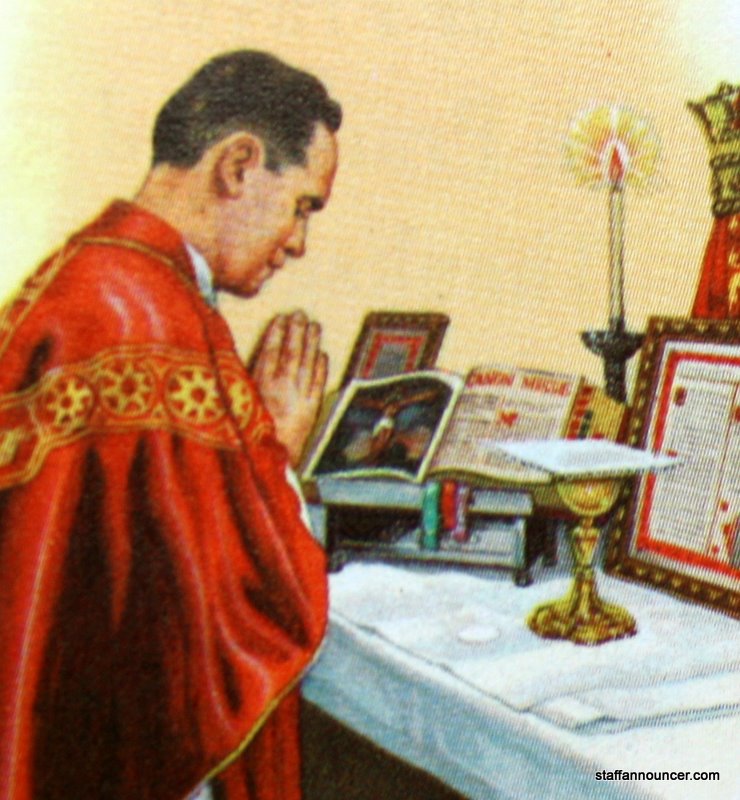 There were many important, substantive changes made at that series of meetings held in Rome from 1962-65, but the one that had the greatest, most immediate effect on every day Catholics, was the introduction of vernacular languages into the Mass.

Up until 1967, Catholic Masses were still said in Latin, and were mostly said by a priest facing away from the congregation, and facing the tabernacle. The decisions made at the Vatican II opened up mass for more lay participation in the service, and allowed a greater number of people to take an active part by being able to listen and understand the Mass.

This missal, obviously meant for children, gives some great illustrations, the basic outline and explanation of the old Mass, and many of the old Latin responses that were changed to the ones that are about to be changed again now about four decades later. The book was necessary, because, again, nearly everything was said in Latin, and a young child certainly wouldn’t be able to follow along.

Note that the last page is a prayer to be said for those being persecuted in Russia. These prayers were added to the mass by Pope Pius X, and it was ordered that they be said in prayer for those in Soviet Russia by Pope Pius XI in the 1920s.I’m not sure where I picked up this particular book, but it was originally owned by George Clemens, who made his communion at Annunciation Church, Lafayette Avenue in Buffalo, in 1962. There was a George Clemens born in Buffalo in 1954, and died in 1987, living in the same zip code as Annunciation Church, so that could very well have been him. Again, I don’t exactly remember where this book came from, but it was likely with a pile of other things.

In 1963, The Vatican Council decreed the following:

“[T]he rite of the Mass is to be revised … the rites are to be simplified, due care being taken to preserve their substance. Parts which with the passage of time came to be duplicated, or were added with little advantage, are to be omitted. Other parts which suffered loss through accidents of history are to be restored to the vigor they had in the days of the holy Fathers, as may seem useful or necessary. The treasures of the Bible are to be opened up more lavishly so that a richer fare may be provided for the faithful at the table of God’s word … A suitable place may be allotted to the vernacular in Masses which are celebrated with the people … communion under both kinds may be granted when the bishops think fit…as, for instance, to the newly ordained in the Mass of their sacred ordination, to the newly professed in the Mass of their religious profession, and to the newly baptized in the Mass which follows their baptism…”

The next year, biblical readings and the prayers of the faithful where introduced in local languages, as were the ‘Our Father,’ and other chants and parts of the Mass in which the people participated.

In 1967, the canon of the Mass was allowed to be said audibly, and in vernacular languages, and several of the vestments previously required of priests were made optional.

The Mass was further changed, to the service now familiar to most Catholics, in 1970.

Read more in a very thorough wikipedia article on The Tridentine Mass, also known as the Latin Mass.

Here at staffannouncer.com, we have dozens of church anniversary booklets, and other items from churches all over Western New York “on the pile” of great items to shared right here at your home for Buffalo’s pop culture memories.