A great scene of typical life in Buffalo from 70 years ago shows how entirely different life was in Buffalo such a short time ago. Streetcars, men wearing wide-brimmed hats, billboards in Polish, all in a Buffalo/Cheektowaga city line neighborhood where they’d all be unrecognizable today.

The billboard was for “Polish Everybody’s Daily,” as the Polish daily newspaper “Dziennik dla Wszystkich” was known to English speakers. The heart says “40 years of building the might of Buffalo,” which by any measure was true.

Publisher Frank Ruszkiewicz called his daily “the only paper necessary in the Polish territory.” Not only was it read by 30,000 Polish speakers in Sloan, Black Rock and East Buffalo, it was also the organ by which community was built among Buffalo’s Polish population.

Through the 1950s, the paper was hurt by a dwindling number of people who wanted their daily news in Polish. A two-day strike of mechanical workers in 1954 caused a setback as well. The final writing was on the wall when “Everybody’s Daily” was making front page news in the city’s other newspapers.

A trade official of the Communist government in Poland who defected to the West said today that Communists in Poland are using the Polish language newspaper in Buffalo, Everybody’s Daily, as a propaganda outlet in the U. S. – Buffalo Evening News, May 16, 1957

The publisher and the editor of paper vehemently denied the charges, but it was the final blow. The last edition of the paper was printed in August 1957, a few weeks short of the paper’s 50th anniversary.

To alleviate any question of how a Polish language billboard would have been received at the corner, a 1946 want ad for Eddie’s Bakery, shown left in the top photo, calls for a sales girl: Polish preferred.

The building at the left on the 1948 photo, still standing at 1096 Walden, was a bakery for decades. Eventually known as the Walden Bakery, at the time of the photo, it was Eddie’s Bakery, owned by Eddie Olejniczak. For almost 30 years it was the EF Kuntz Bakery – but at one time, it was more than just bread and pastries.

At the height of prohibition in 1926, Ernest and Gustav Kuntz were arrested on charges of manufacturing and possessing “high powered beer,” following a federal raid that turned up 60 bottles of beer, 80 gallons of cider and two quarts of whiskey inside the bakery.

The streetcar is on the last run of the number 6 Sycamore run. The blind, sharp angle was a traffic hazard, especially since it was an end-of-the-line turnaround for the Walden line. To use the “Y” turnaround and start heading back inbound, streetcar motormen had to blindly reverse into traffic.

In 1932, the Town of Cheektowaga petitioned the International Railway Company to reroute the line so that a loop turnaround could be built in a nearby field. At the height of a big snowstorm in December 1942, the snow-packed switches on the Y turnaround caused the street car to derail.

The end of the line for this end-of-the-line streetcar stop came in September 1948, when the Sycamore/Walden line was converted to buses. The last of Buffalo’s IRC streetcars were retired on July 1, 1950.

For decades, it was a weekend home-away-from-home for people who have stuff to sell and those on the endless quest for the perfect (if not slightly used) stuff. 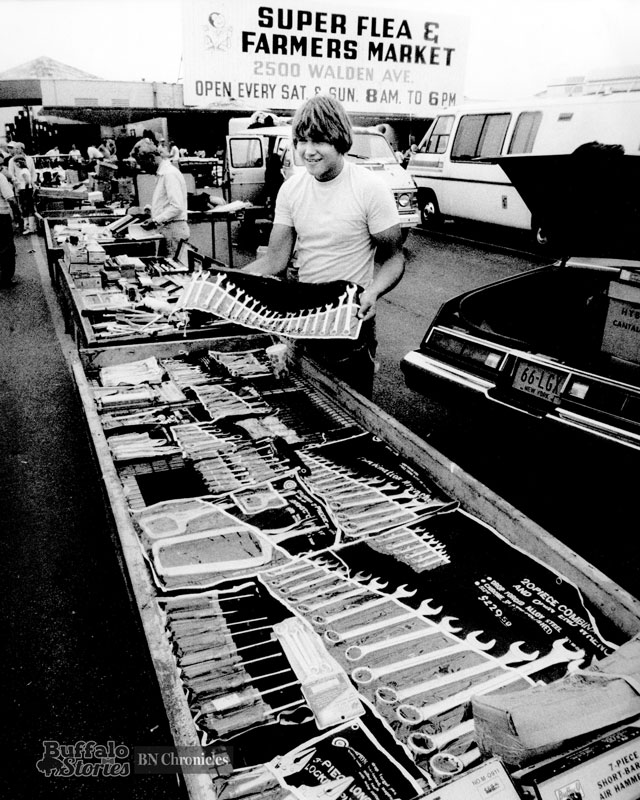 While much of Super Flea’s buying and selling went on in the parking lot when weather allowed, the Super Flea building was a year-round weekend junk adventure. 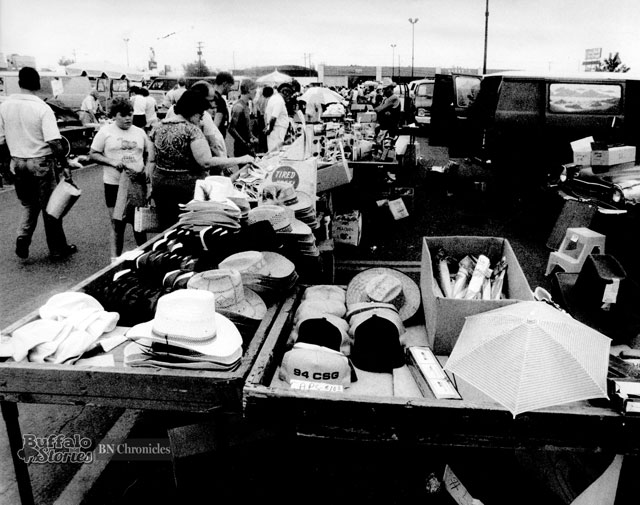 Super Flea moved into the structure originally built at a cost of $1.1 million by GEX, and opened in 1962. GEX was a membership department store for government employees, military personnel, and employees of companies which dealt with the government. 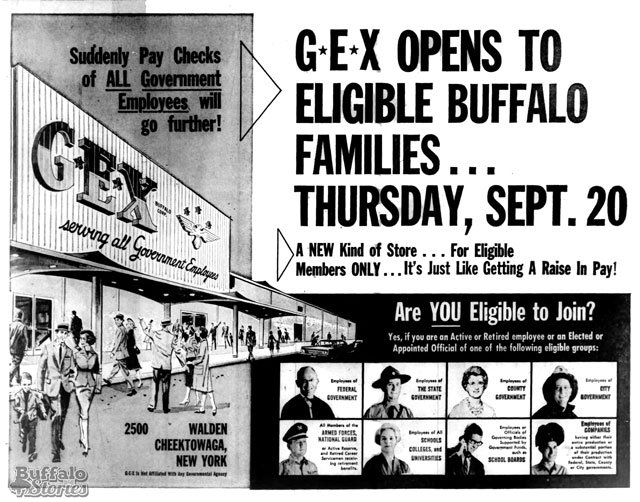 When it opened, GEX carried more than 80,000 items, in a single story store “the size of three football fields.” 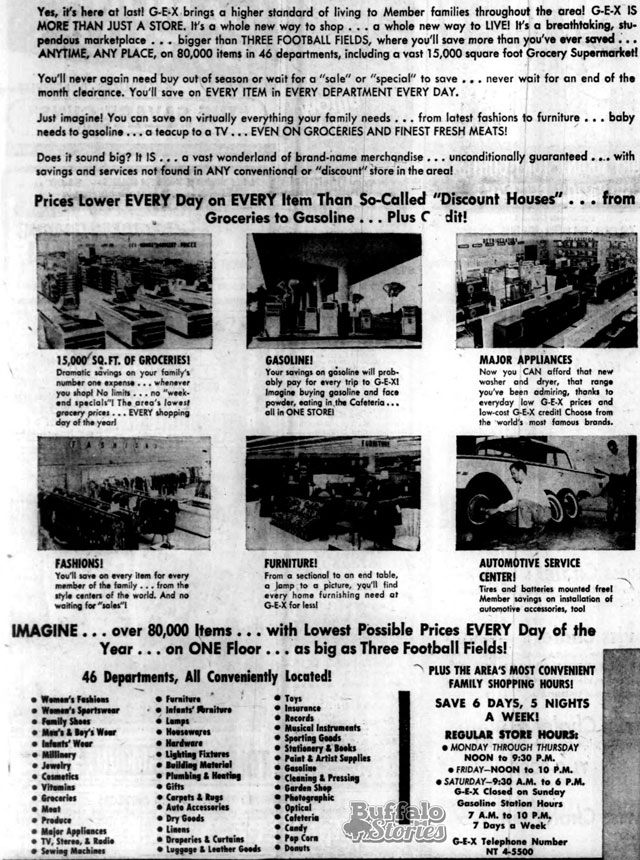 The building that was home to GEX then Super Flea for more than 50 years was torn down starting in 2014. A new Walmart Supercenter opened on the site in 2015. 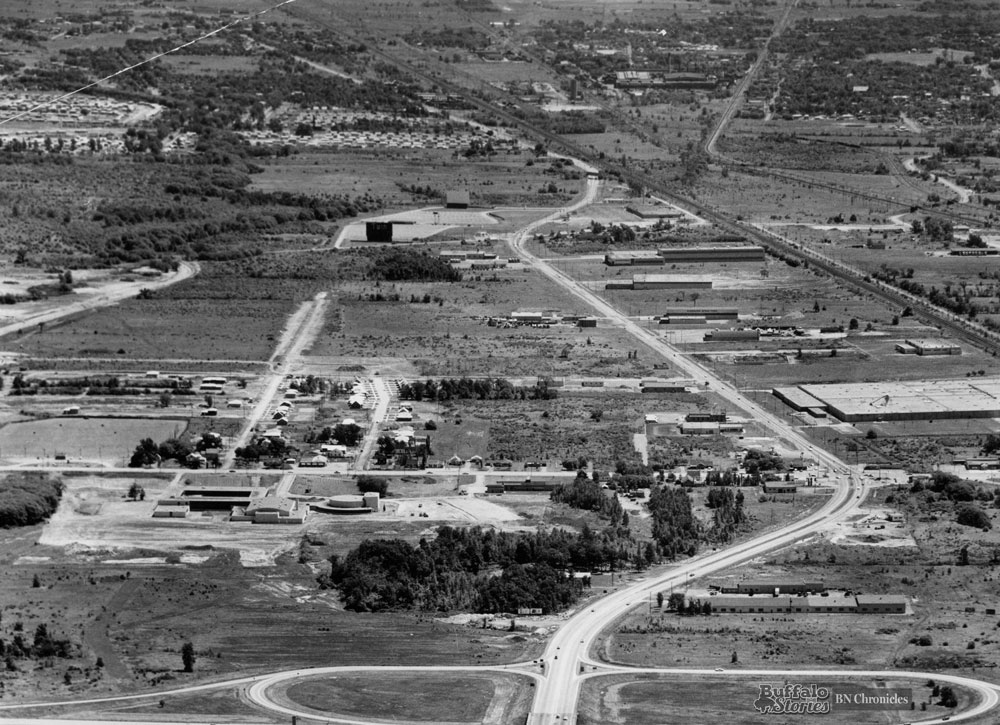