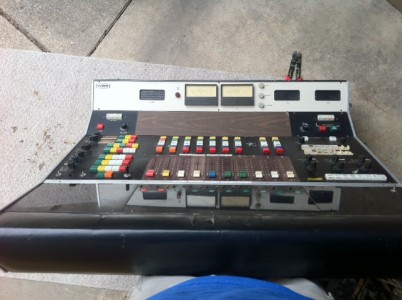 I spent this 4th of July morning trying to figure out how to hang this classic WBS/Ward Beck Systems audio console from the wall of my garage, where it’s lived for most of the last 11 years or so. This was WBEN’s newsbooth board from the time of the 1974 remodel of the WBEN Radio studios until 2000, when WBEN moved to Amherst.

Over on Facebook, in posting this blog, I’d love to come up with a comprehensive list of the great WBEN personalities and newspeople who’ve regularly sat at this board. Just in the time I worked there from 1993-98, there was Kevin Keenan, Mark Leitner, Susan Rose, Tim Wenger, George Richert, Claudine Ewing, Kathleen Donovan, Brian Meyer, Mark Webster, Mike McKay, Howard Simon, Rick Maloney, Dave Kerner, Kevin Sylvester, Marty Biniasz, Joe Sviatko, Dave Debo, Michael Mroziak, my wife Monica Huxley, and of course Ed Little, who made the final WBEN broadcast from the Elmwood studios sitting at that board (See 1980s photo of Ed at the board below.)

There are dozens that haven’t leapt to my mind, but believe me, this boat anchor has some history. 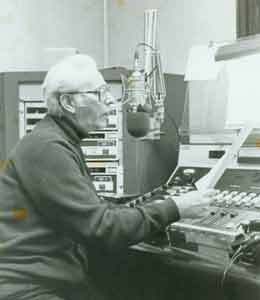 I got it from a friend… who bought it from a guy who garbage picked it (or maybe stole it?) when WBEN left its Elmwood Avenue studios for Corporate Parkway in 2000. The friend had hoped to use it in recording his band, but the truth is, the thing barely worked when it was in service. When he realized it was little more than a momento, he called me and I put it in my garage.

It’s been in the back of the garage, on the floor behind the snow blower and infamous Pepsi machine. It deserves better than that. And I got to thinking, that if there is some place better than my garage wall where it can be displayed, it should be.

I’m asking for ideas that you can help make happen. Where can we put this piece of Buffalo’s broadcast history for all to enjoy? To hang from the wall, you’d need a space four feet wide by 5 feet long. (Less than that, but I forget to measure.)

If we can find a legit public place, willing to hang it like the artwork it is… I’ll fix it so the lights light, the VU meters move, and maybe even the small cue speakers could play a loop of an old Clint Buehlman broadcast which people up close would be able to hear (optional). I would also work out any signage of addition display items that need to accompnay the piece.

It’s more than history… Its a cool retro art piece, really. I’m willing to permenantly or temporarily loan it to an appropriate place that wants to display it. It’ll be cool in my garage, but again, it really deserves better. Any takers?