The German Insurance Building was the backdrop to the dedication of the Soldiers & Sailors Monument in Lafayette Square in 1882, only two years after this 1880 map of Buffalo was printed.

The six-story building fronted with cast iron was on the north corner of Main Street and Lafayette Square, where the Tishman Building — the longtime home of National Fuel and now the Hilton Garden Inn — now stands.

Old-time Buffalo attorney William Palmer watched the building being built as a little boy and shared his memories with News reporter Bob Watson.

“It was the finest building on Main Street,” Palmer said. “It was the only building of any size on Main Street. People used to stop and look at it.”
Later, Palmer had offices there. He said the breath-taking views stopped inside the front door.

“Far from being plush or ornate, the law offices in the building were plain in the extreme, with linoleum-covered floors, simple office chairs, gas lights and an occasional cuspidor,” which is probably better-known to modern readers as a spittoon.

The name was lost before the building was — the German Insurance Co. became the Buffalo Insurance Co. during the anti-German scourge of World War I.

The old insurance building had stood at the northwest corner of Lafayette Square for 81 years when crews began dismantling it in 1957. To most, it had seemed like time enough. 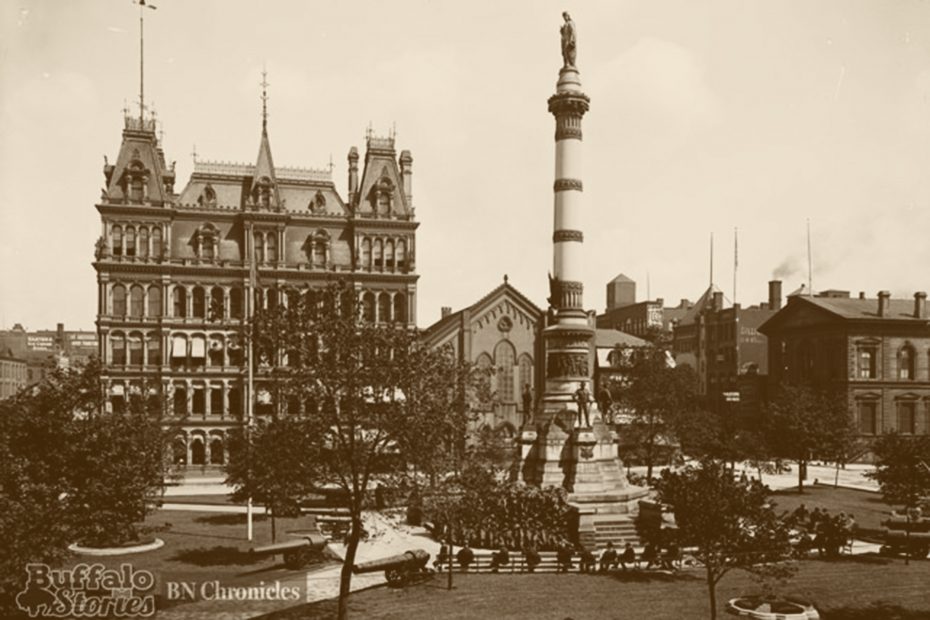 “Now seedy and dilapidated, it once was noted for an ‘architectural elegance’ that caused passersby to pause and stare in wonderment,” Watson wrote in The News. “But the ranks of those who remember it at its best have shrunk, and there will be few to shed any tears as it comes tumbling down.”

It was especially difficult to cry as excitement surrounded a new era for downtown Buffalo.

At a proposed 22 floors, the Tishman Building was “Buffalo’s first new skyscraper office building in more than a quarter-century,” but it was only the first of dozens of projects that put the wrecking ball through some of Buffalo’s most iconic — if not, in some cases, worn and tired — landmark buildings.