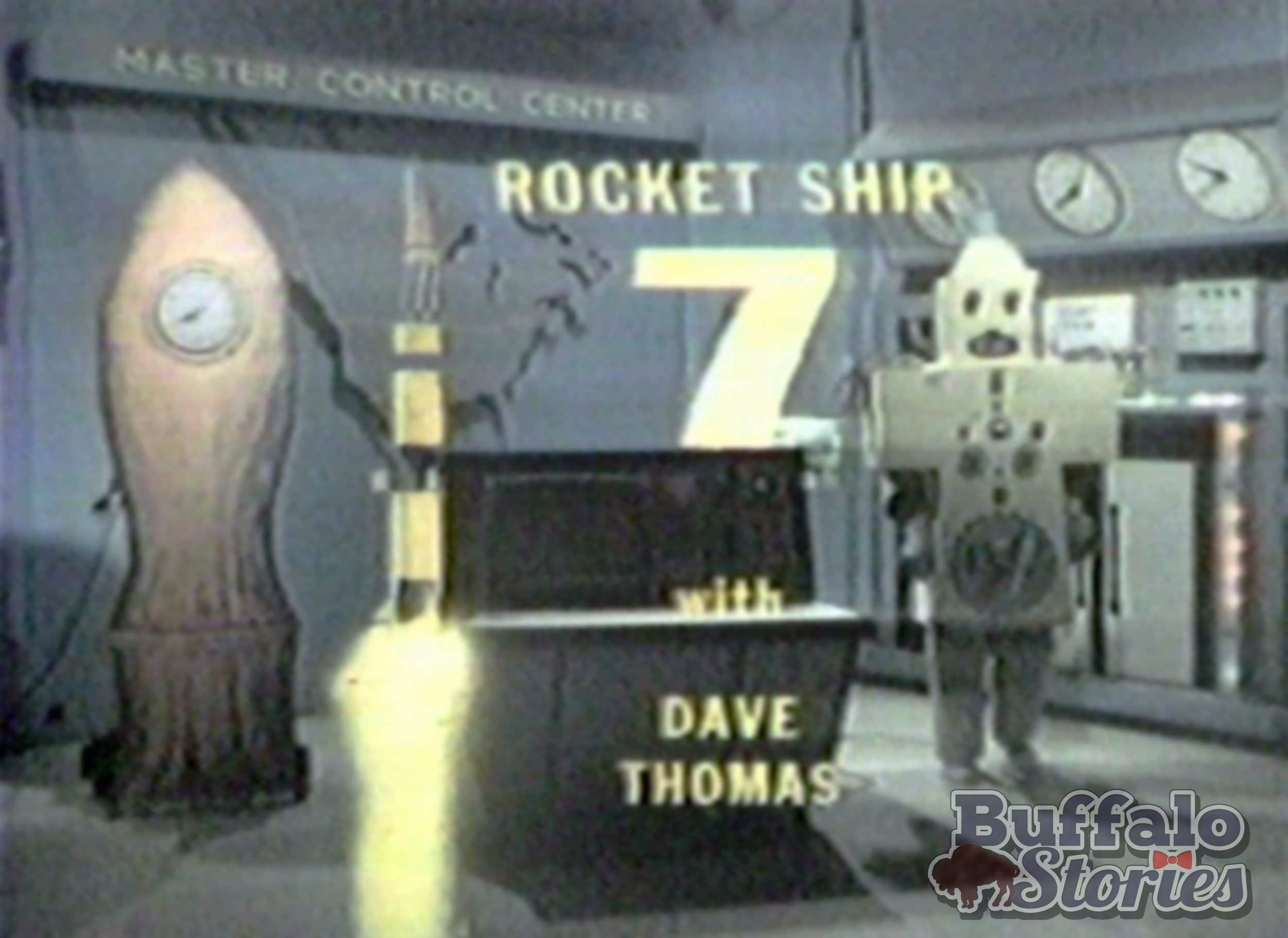 We’ve been taking a look back at the local kids shows we’ve watched through the years on Buffalo TV.

We go channel by channel, show by show, describing some of the favorites and adding photos when a photo is available.

Sadly, no video exists of most of these shows… but the memories live on. 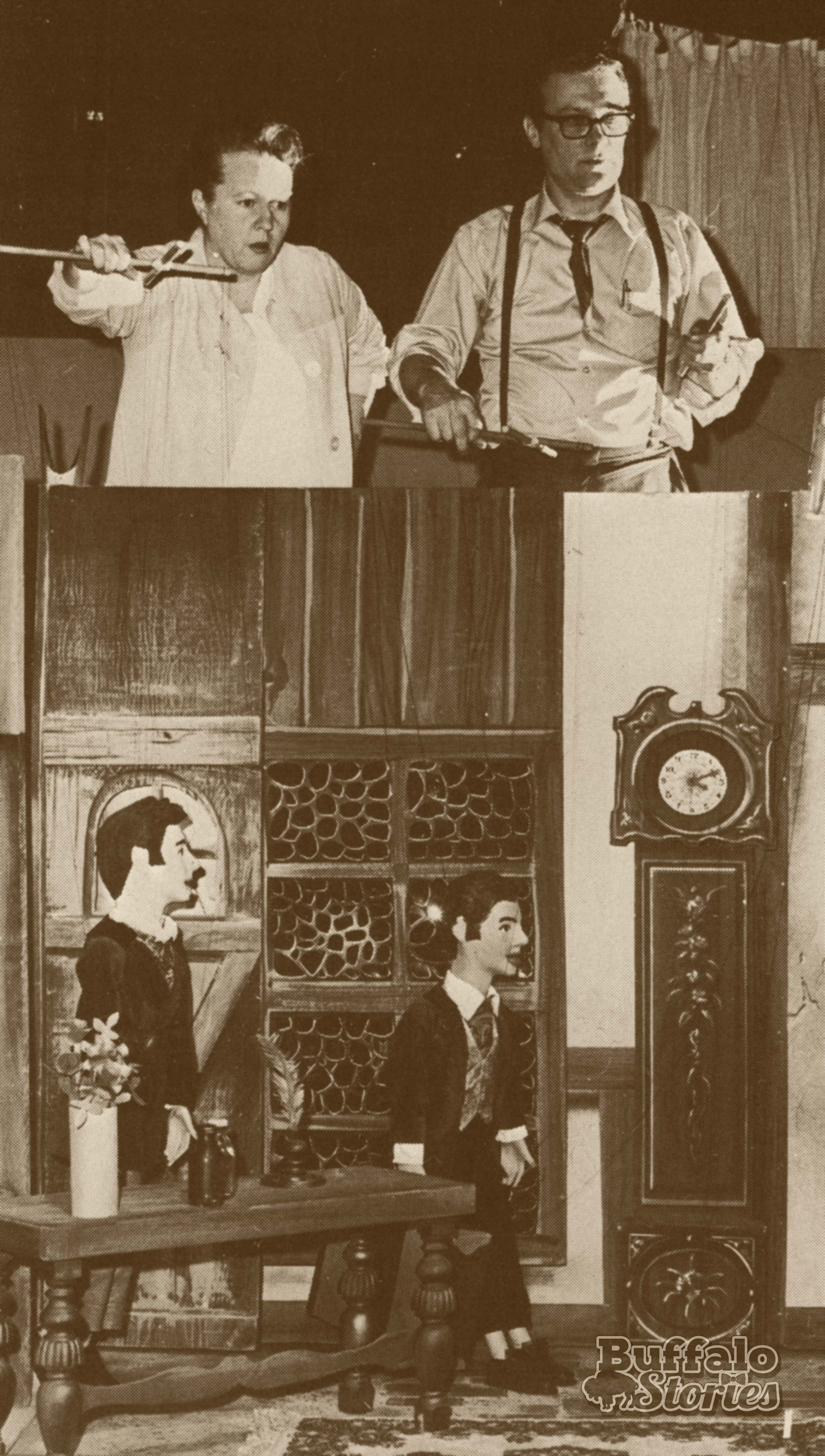 When Dave Thomas wasn’t hosting Dialing for Dollars with Nolan Johannes and Liz Dribben, he was palling around with Promo The Robot and Mr. Beeper.

Rocketship 7 was a must watch for many Buffalo kids through the 60s and 70s, before Dave Thomas blasted off for a new job in Philadelphia in 1978.

Jay Nelson was a disc jockey on WKBW Radio, but is perhaps best remembered as the host of Channel 7’s Jungle Jay Show.

He wore a pith helmet and a leopard print jacket while playing old Tarzan clips when kids got home from school.

The shtick was so popular that even after he left Buffalo for his native Canada to work at CHUM Radio in Toronto, he continued calling himself Jungle Jay, and continued wearing the pith helmet. The show was just as popular north of the border as it was in Western New York. 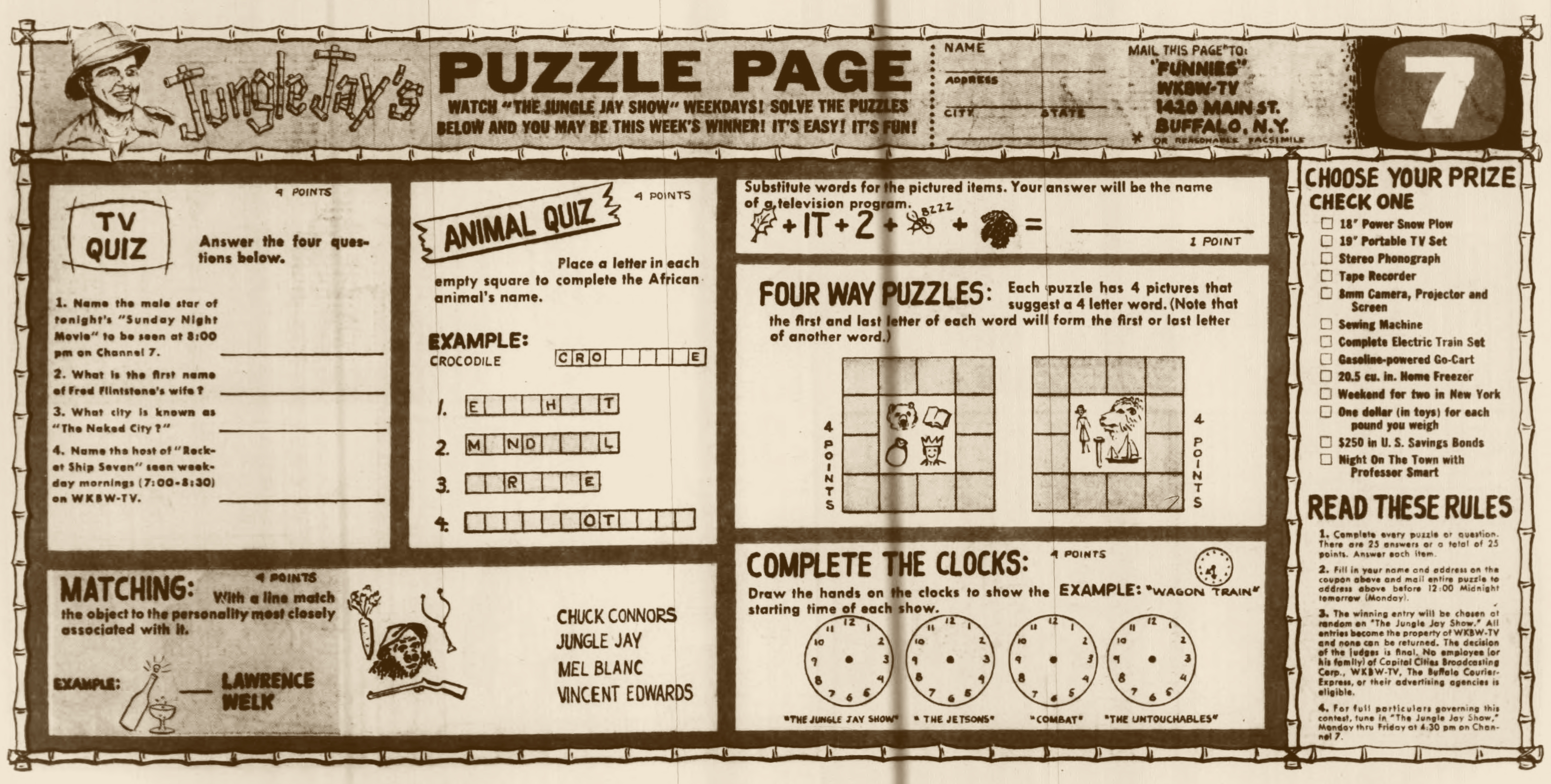 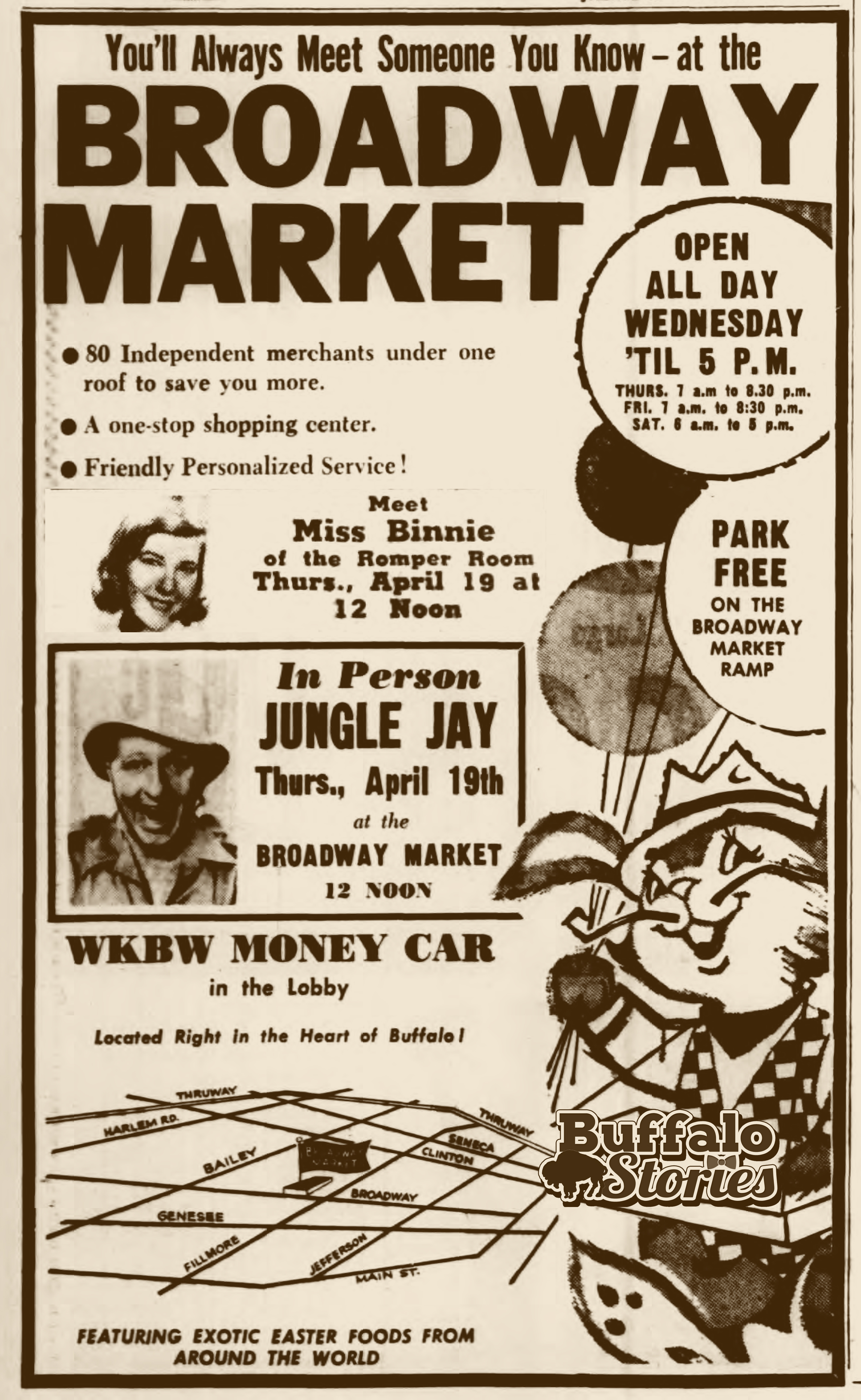 Channel 2 has had a few popular locally produced kids’ shows through the years. 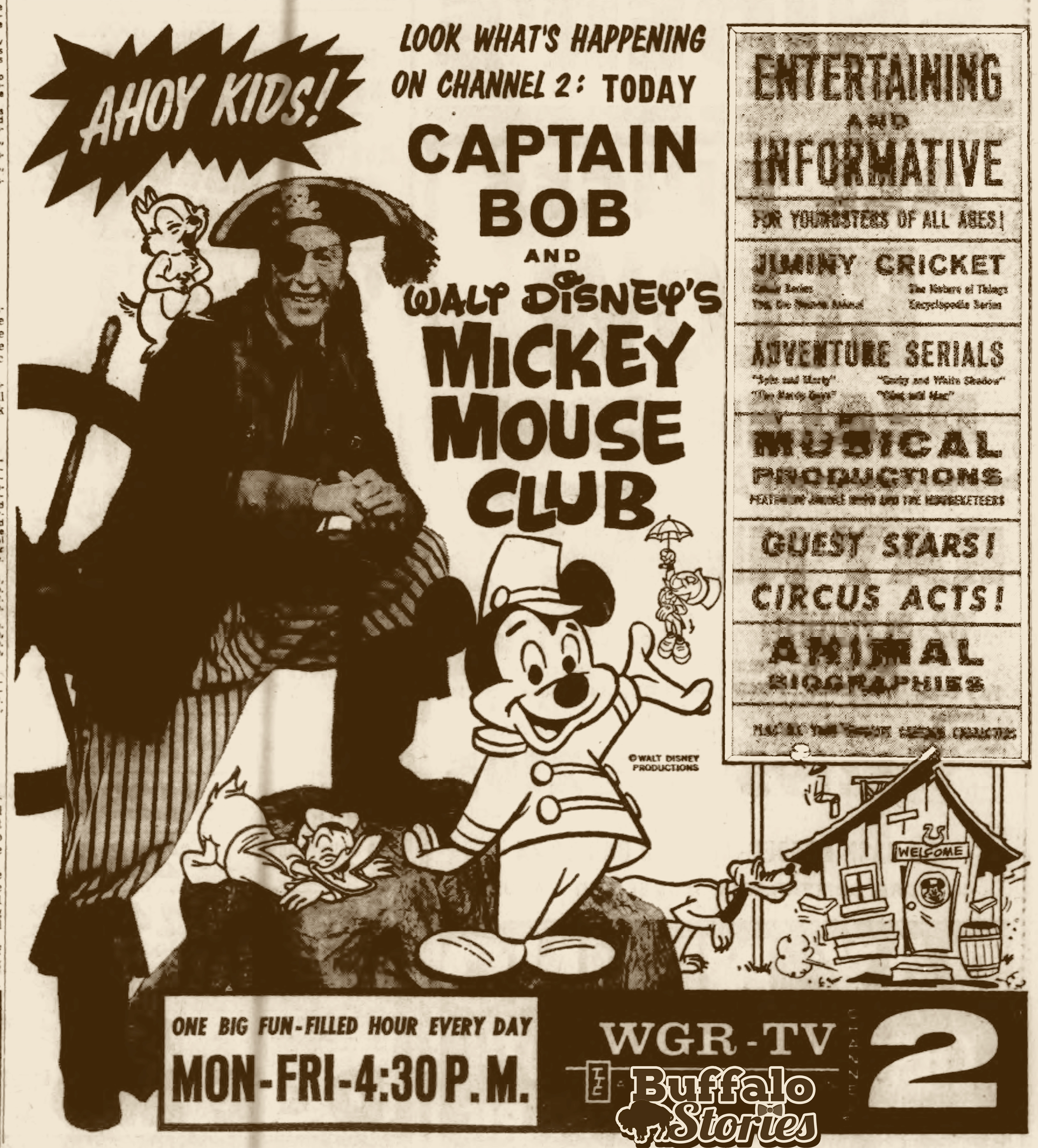 He did local cut-ins during two wildly different programs.

Captain Bob also hosted the local presentation of The Mickey Mouse Club afternoons in the late 50s and early 60s.

Jim Menke was the puppeteer during the Captain Bob Show, and later he brought his puppet Corky to the Mr. Whatnot Show on Channel 17.

Another Channel 2 kids show that was as much a commercial as it was entertainment hit Buffalo TVs in 1960 with the opening of Fantasy Island.

Buckskin Joe was the host of what looked like a TV version of Fantasy Island’s Wild West Show. Buckskin Joe was actually Clyde Farnan, the General Manager of the amusement park.

Checkers and Can Can was a short-lived locally produced WGR-TV show featuring Checkers the Clown and Can-Can the tin man.

Back in the 50s, 60s, and 70s, there were probably a dozen different versions of Romper Room you may have seen on Buffalo television screens.

There were nationally syndicated versions, as well as shows that were produced in Toronto and Hamilton.

But on two different occasions, for short periods of time, there were Buffalo-produced Romper Room shows as well.

Channel 7 aired a local version of Romper Room for the first few years the station was on the air.

Miss Mary was the first local host. Her real name was Cele Klein, and she’d been a veteran soap opera actress. The show would get 150 letters a day from kids across WNY and Southern Ontario.

She handed her magic mirror over to Miss Sally Klein, who was around for about a year, then Miss Binnie Liebermann, who was hosting the show when the local version was cancelled in 1962– “clobbered” in the ratings, according to Channel 7, by Uncle Mike Mearian on Channel 4.

Another local version of Romper Room came in 1971 when Channel 29 first signed on the air. Miss Elaine Murphy was the host.

Channel 29 also had another live local version of a national show that appeared in local versions all around the country.

Young Buffalonians had watched Bozo the Clown productions from Chicago and Boston and watched Bozo cartoons– but the only locally produced Bozo’s Big Top was on WUTV starting in 1971 and starred local clown Francis Stack as Bozo.

We’ve been looking at local kids TV over the past week, and while they weren’t 2,4, or 7, most of us spent plenty of time watching 5,9, and 11, because there were plenty of Canadian Kids shows we loved.

Mr. Dressup and his tickle trunk filled with costumes for him and puppets Casey and Finnegan was an iconic program airing on CBC for more than 40 years.

Also on Channel 5 for a long time, The Friendly Giant was there every morning if you looked up… waaaaay up.

There was a rocker for someone who liked to rock, Jerome the Giraffe and Rusty the Rooster.

Channel 9 in Toronto gave us the Uncle Bobby Show. Bobby Ash was an old British vaudevillian, who was joined by Traffic Officer John, Meredith Cutting, “the Singing Policeman;” Cy Leonard, “the ventriloquist;” and of course… Bimbo the Birthday Clown.

And if you have any recollection of learning French on Sesame Street— you watched that on Canadian TV, too. In the US, Sesame Street has always taught Spanish.

Of course you probably watched both– especially if you also remember Goldie Gardner asking you to bring your parents to the TV, as she did on Channel 17 for decades.