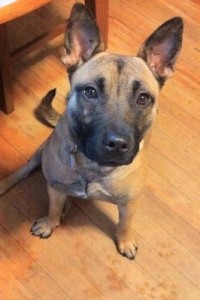 Maybe you hear it in my voice. As a journalist, I’m supposed to, and do, tackle my assignments without prejudice and with a willingness to hear both sides.I hope you haven’t heard it, but over the last few months, I just haven’t been able to hide my disgust. As I read the weather forecast.

I’m not a skier or a snowmobiler, so I really don’t mind the lack of snow. And since I don’t play pond hockey, the fact that the lake didn’t freeze causes me no real alarm (except that typical Buffalo expectation that we’ll all be under 37 feet of snow on April Fools Day.)

Really, I love the warmth and sunshine maybe even more than the average guy. But this year, nothing ruins my day like seeing a high temperature of 43 or 39. Above freezing. Well above freezing. There’s no snow to melt, but the ground does get soft.

There really hasn’t been much of a winter at all, which is why the winter of 2011-12 will forever be remembered in the Cichon house as the “Winter of the Muddy Paws.”

If you are a dog owner, how can you be excited to hear that its 30 today, but tomorrow we could hit 38? Can you really feel the difference between 30 and 38? Even if you can, good luck enjoying those “warmer temperatures,” since in my house a quick 25 seconds outside in the backyard can equal up to 5 minutes of paw, leg, and belly cleaning.

Willow is good. She sits and will even hand you a paw to be cleaned; very regal for an SPCA mutt. But if you’ve just about finished wiping, and a squirrel pops his head over the fence…. forget it.

I really don’t want to be one of those people who finds something to complain about everything, and I’m generally not that way. Even about our usually mundane winter tasks like scraping of windshields and snowblowing the driveway. No problem. But these dirty paws, five, six or thirteen times a day, sometimes just to do the quick run out and come in for a treat.

It’s affecting my marriage and showing my flaws. So far deep into the spare bathroom towels, I’m not sure whether I’m about to pluck a “good towel” from the linen closet or not. And saints preserve us if there’s an unexpected muddy paw and I reach for the good dish towel.

Even as a lifelong Buffalonian, I don’t know that the weather’s ever had such a lousy effect on me. Another month of snow? No problem. I have furry hats to keep me warm. There is no kind of head gear to get you through muddy paws. 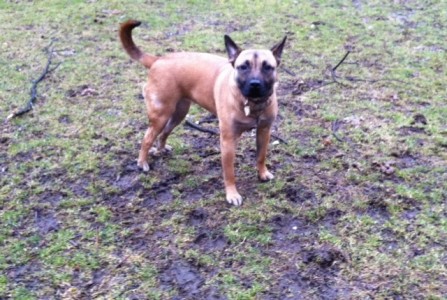 About now is the point in my rant when someone will mention that they saw these cute little booties for dogs’ paws, so that you can put them on when they go out, and take them off when they come back in. These were obviou sly designed either by someone who has never been around a dog, or by someone who hates dog owners. Willow would, and rightly so, go out in the muddiest part of the yard and roll around in it, covering herself in mud trying to get those booties off her paws. Her paws would stay clean, but the rest of her would be caked in mud.

At this point, if taking out the ice boom means spring is here, for the sake of my mental well-being, I hope the solid-ground-part of spring is around the corner really fast. To think it could be another two months of picking mud covered grass bits from between the toes of this animal could actually have me hoping for a blizzard. I’m losing grip with reality on this.

I really wish I could be one of the proud Buffalonians who can think only of Mr. Softee trucks and shorts when we hit 42 degrees in February, and most winters I’m with ya. But this year, that excitement is marred by the same mark as my kitchen floor: a big muddy paw print.