You could call it “the day the roast beef died.” 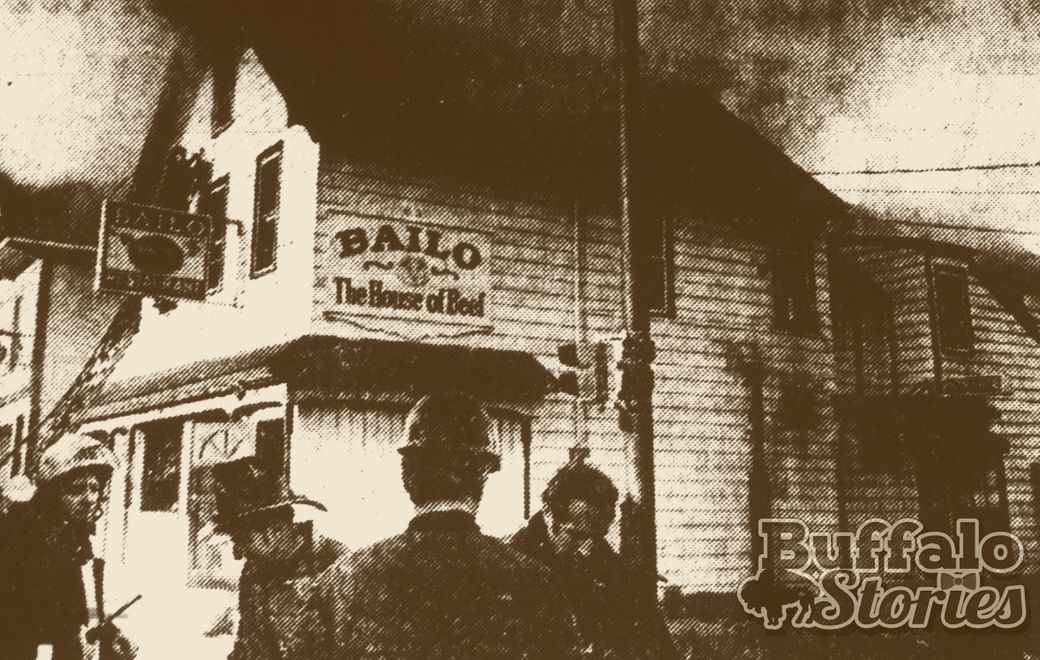 Sept. 25, 1979. Flames and smoke poured out of the three-story structure at 1298 Bailey Ave., the longtime home of Bailo’s. The fire, which started in the kitchen of the restaurant, caused more than $150,000 in damage to the building and contents, and it ultimately lead the Buffalo landmark to close.

From just about the moment Prohibition was lifted in 1933, George Mankowski operated the gin mill at Bailey Avenue and Lovejoy Street. When he died in 1953, his sons Eugene and Chester were already running the place. Known informally for years by the nickname formed by the Bai-Lo intersection, it officially became the Bailo Grill when Chester and Stella Mankowski registered the business name in 1956.

Not much different in menu or ambiance than hundreds of other neighborhood taverns around Buffalo, Bailo’s became well-known, and eventually beloved, far outside the boundaries of the Lovejoy/Iron Island neighborhood for something we still love in Western New York: The portions were huge.

The draft beers were big. The shrimp cocktail was big. And famously, the beef on weck was huge. 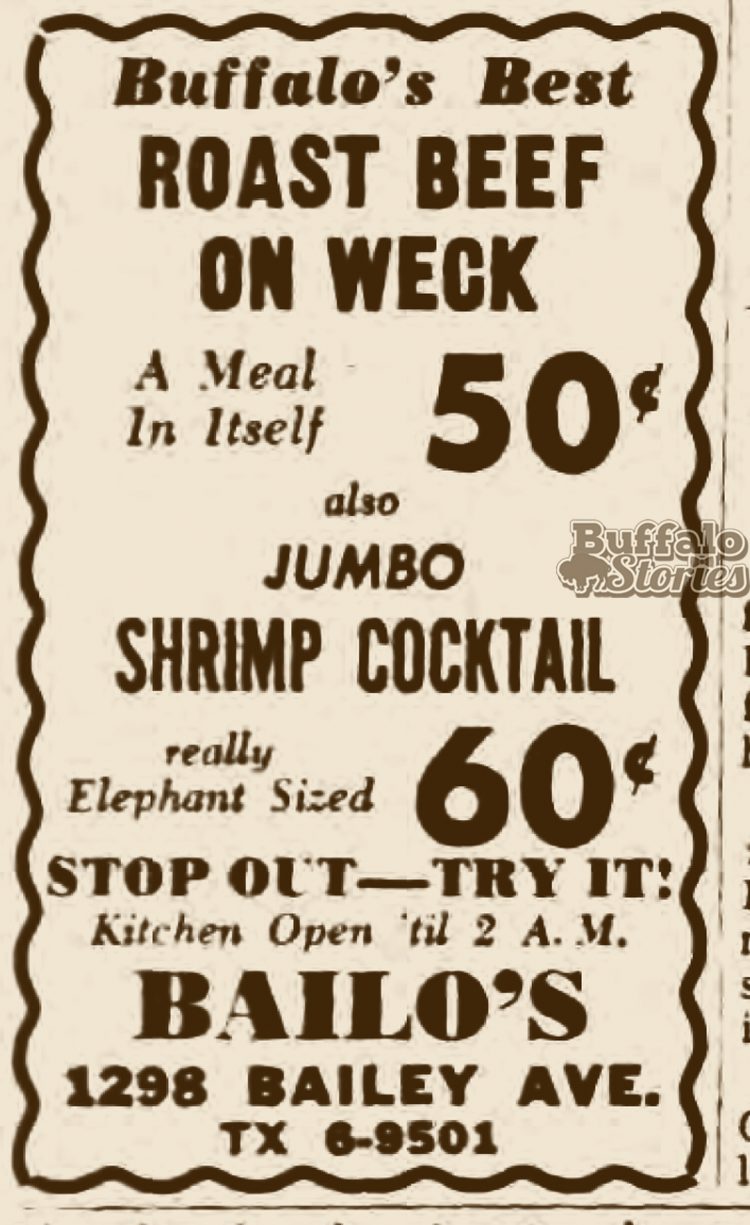 The well-done beef, usually topped with gravy and horseradish at Bailo’s, poured off of the full-sized kimmelweck roll.

Again, at a time when dozens — if not hundreds — of corner saloons were carving up beef on weck around the region, Bailo’s was famous all over the city for people who’d make the trip for what was universally recognized as one of the city’s best roast beef sandwiches.

Sitting in the Bailo’s dining room, you were likely to bump into people from all corners of Western New York, along with a good mix of families from the Lovejoy area and UB students drawn down Bailey Avenue by the promise of a real Buffalo experience headlined by giant sandwiches and ice cold and super cheap Ballantine draft beer.

Chet and Stella Mankowski sold the place to John and Lillian Stein in the mid-1970s. Soon after the fire, an attempt was made to open Bailo’s on Niagara Falls Boulevard, but it didn’t last. A Buffalo institution faded away.

Nearly 40 years after the last sandwich crossed the bar on Bailey Avenue, people still talk about Bailo’s. The sandwiches are fondly remembered, but it’s also the unbridled retelling of an urban legend — with no apparent basis in fact — that helps keep Bailo’s memory alive.

Just about anyone interested enough about Bailo’s to read this story has heard the rumors that they served horse meat. The rumors, which I’ve personally been tracking down and researching for more than a decade, have no basis in any verifiable truth.

Despite the fact that there are no firsthand or even secondhand accounts giving credence to the urban legend, one Facebook group celebrating the restaurants of Buffalo’s past had to ban Bailo’s posts because the page was becoming regularly filled with equine double entendre and word play.

Where did the rumors come from?

It’s difficult to say, but over the 45-year history of the tavern, there were incidents like the time in 1969 when the owners were fined for allowing underage drinking. A month after the 1979 fire, the owner was indicted in a tax case. Never, however, does there appear to have been any violations or fines relating to the serving of horse meat.

There were several times when controversy over horse meat heated up in Buffalo. During World War II, when meat was scarce, it was illegal to sell horse meat for human consumption. However, it could be sold and butchered as dog food.

Marlin Perkins, then the Buffalo Zoo curator, was a partner in Buffalo’s first horse meat shop opened in 1943 at 1709 Hertel Ave., currently the site of Deep South Taco.

It was reported in the Courier-Express that while the meat at “The K-9 Kitchen” was marked as not for human consumption, “occasional customers inspect the steaks and hamburg with hungry eyes.”

When no other meat was available, it was clear that not all the steaks made it to Fido’s bowl.

Even the the post-war years, meat was scarce, and several Buffalo butchers were fined for mixing horse meat in with pork and beef when producing sausages and hot dogs.

In 1954, Bernard Badzinski was sentenced to six months in the penitentiary. The Courier-Express called him the “King Pin of the illegal horse meat dealers” after a horse head was found in a barrel not labelled “horse meat” in a store at 1128 Broadway.

“Your crime,” said Judge John Kelly to Badzinski, “is that you were placing other sausagemakers in disrepute.”

All this is to say, plenty was written about horse meat — and Bailo’s never came up once.

So it’s time to put the urban legend to bed and to be able to fondly remember one of Buffalo’s favorite all-time restaurants and talk about its giant roast beef sandwiches — slathered in horseradish — without making a joke. 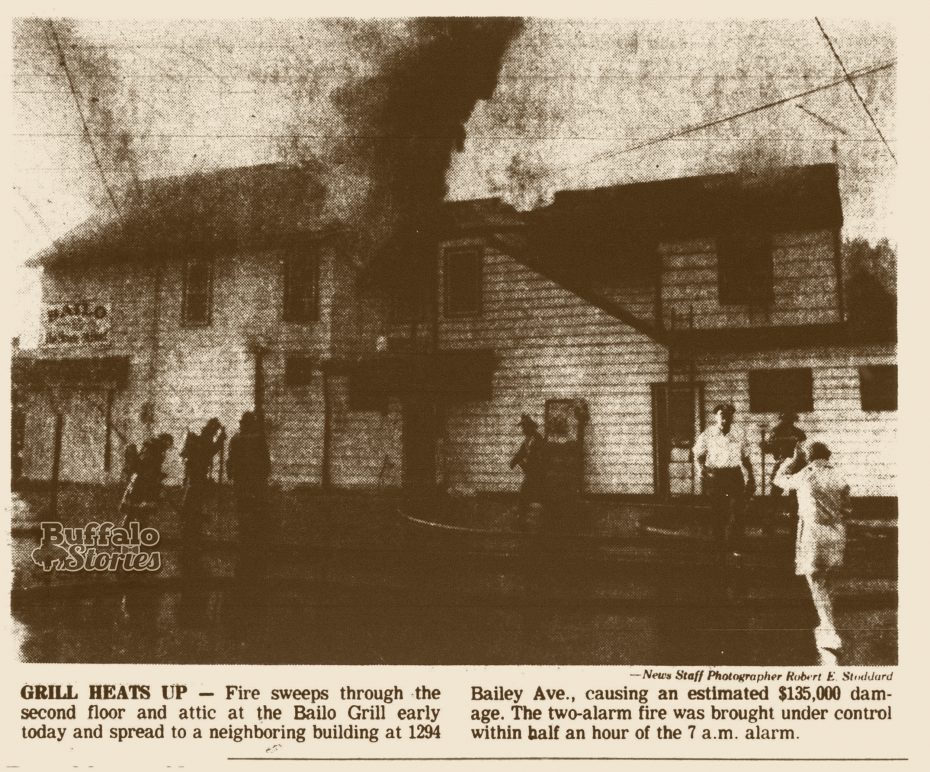