As Buffalonians, we are proud that Charles Burchfield has long had a place among America’s great artists and helped usher in a new era of American art.

But you don’t have to be an art lover to appreciate the lost and almost foreign-feeling past life of Buffalo captured by Burchfield’s brush in his nearly five decades here.

Many of Burchfield’s cityscapes were recognizable representations of places in the City of Buffalo and surrounding Western New York communities, and many more Buffalo locales served as inspiration and played bit parts in paintings made up of many places that Burchfield had seen. 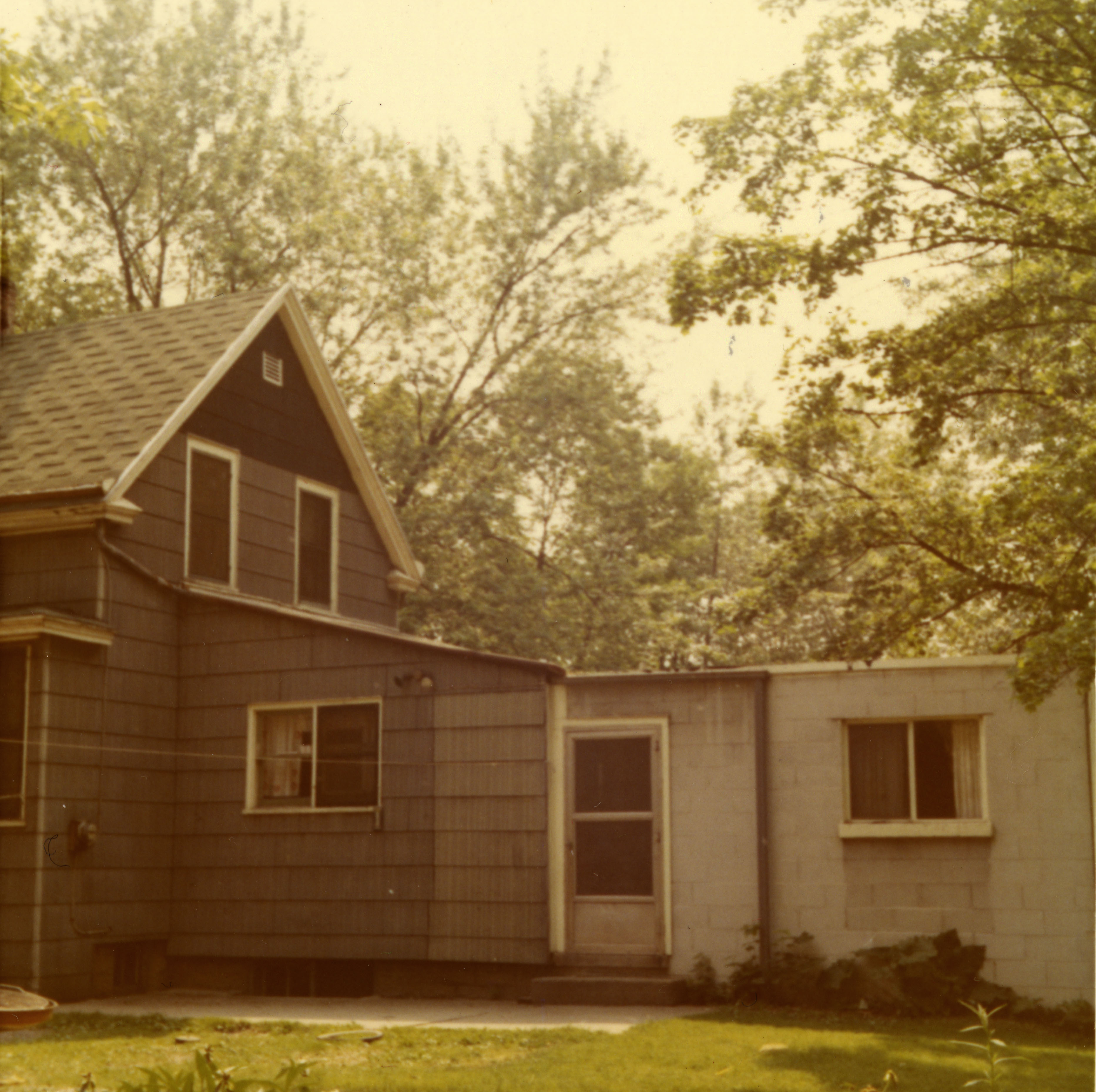 One of Burchfield’s most famous paintings is “Six O’Clock,” shown at the top of the page. It was instantly recognizable in homes across New York State in 1972 when the painting appeared on the cover of 11.4 million New York Telephone phone books. Two Western New York locations served as inspiration for the work—the one shown here is the back of his next door neighbor’s house in Gardenville. The row of houses was inspired by a block of old homes on William Street. (Charles E. Burchfield Archives/James J. Vullo photo)

When he first came to Buffalo in 1921, Burchfield moved around the West Side and Allentown quite a bit. When he wrote a letter to the editor of the Courier-Express in 1925, he used 459 Franklin St. — a few doors from the corner of Allen Street — as his address. He also lived at 124 Whitney Place, and then two addresses — 109 and then 170 — on Mariner Street in Allentown.

But Burchfield’s famous address was “Gardenville.” For more than 40 years, he lived a few houses in from the corner of Clinton and Union in West Seneca. Dozens of works sprung from landmarks near that intersection, including part of “Six O’Clock” at the top of the page.

Sadly, many of the structures which live on in Burchfield’s paintings are gone. But through the work of another artist, a link between a handful of the most famous paintings and the real life structures that inspired them does exist.

In the mid ’70s, James Vullo, artist and great admirer of Burchfield, set out to photograph the Buffalo locations made famous in Charles Burchfield’s works. As many of these places are now vacant lots, Vullo’s photos help unite the world of Burchfield’s art with the photographic reality of city life in Buffalo of the last century and the reality of living in Buffalo today.

Another of Burchfield’s most famous paintings is 1933’s “Ice Glare.” 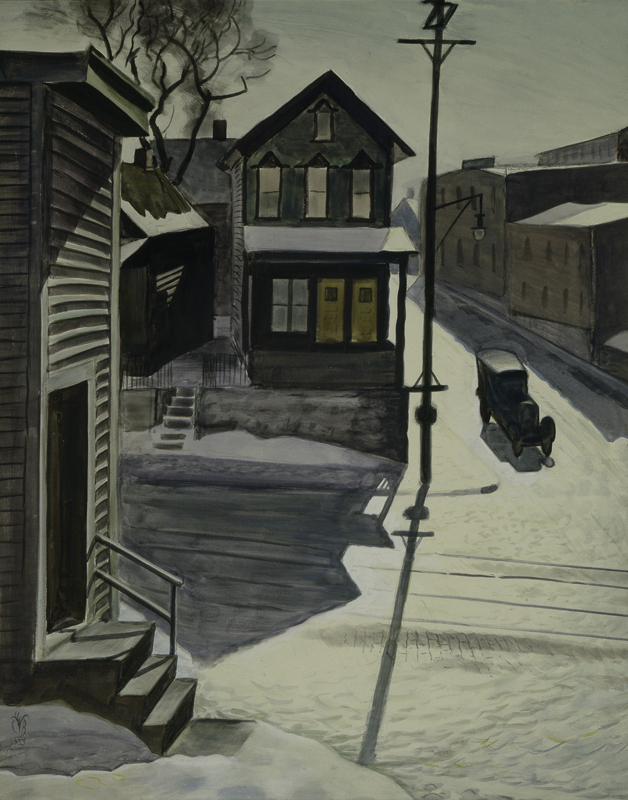 The painting depicted a rather true-to-life representation of a house at the corner of Clinton and Lord streets in Buffalo, as captured by Vullo in the mid ’70s. Today, the corner is a vacant lot.

Even Vullo’s 1970s photos were too late for a few famous inspirations. The homes of “The Promenade” had already been taken down for the Shoreline Apartments being built on Niagara Street near Georgia Street. 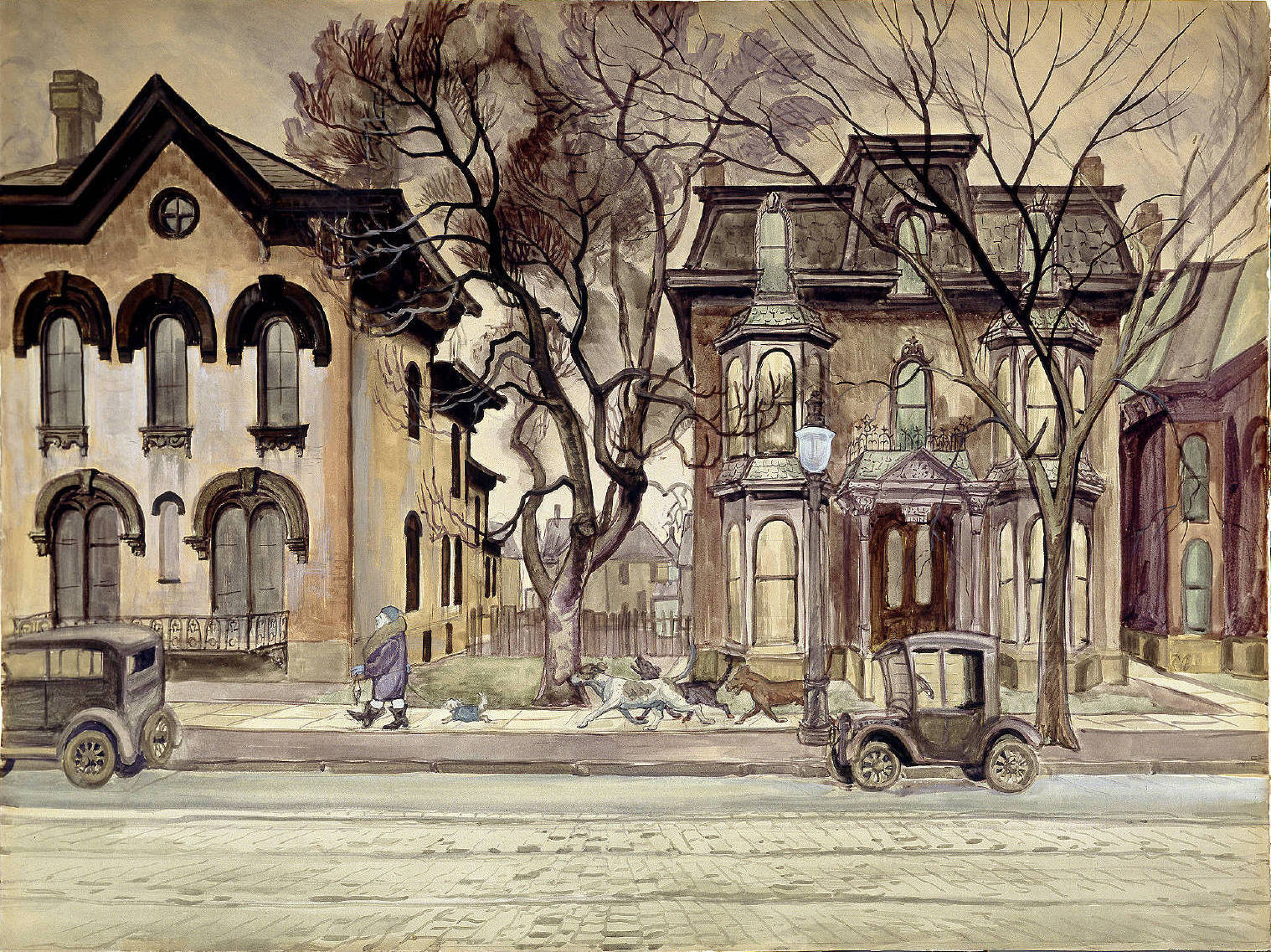 The houses were captured in film before they were taken down. 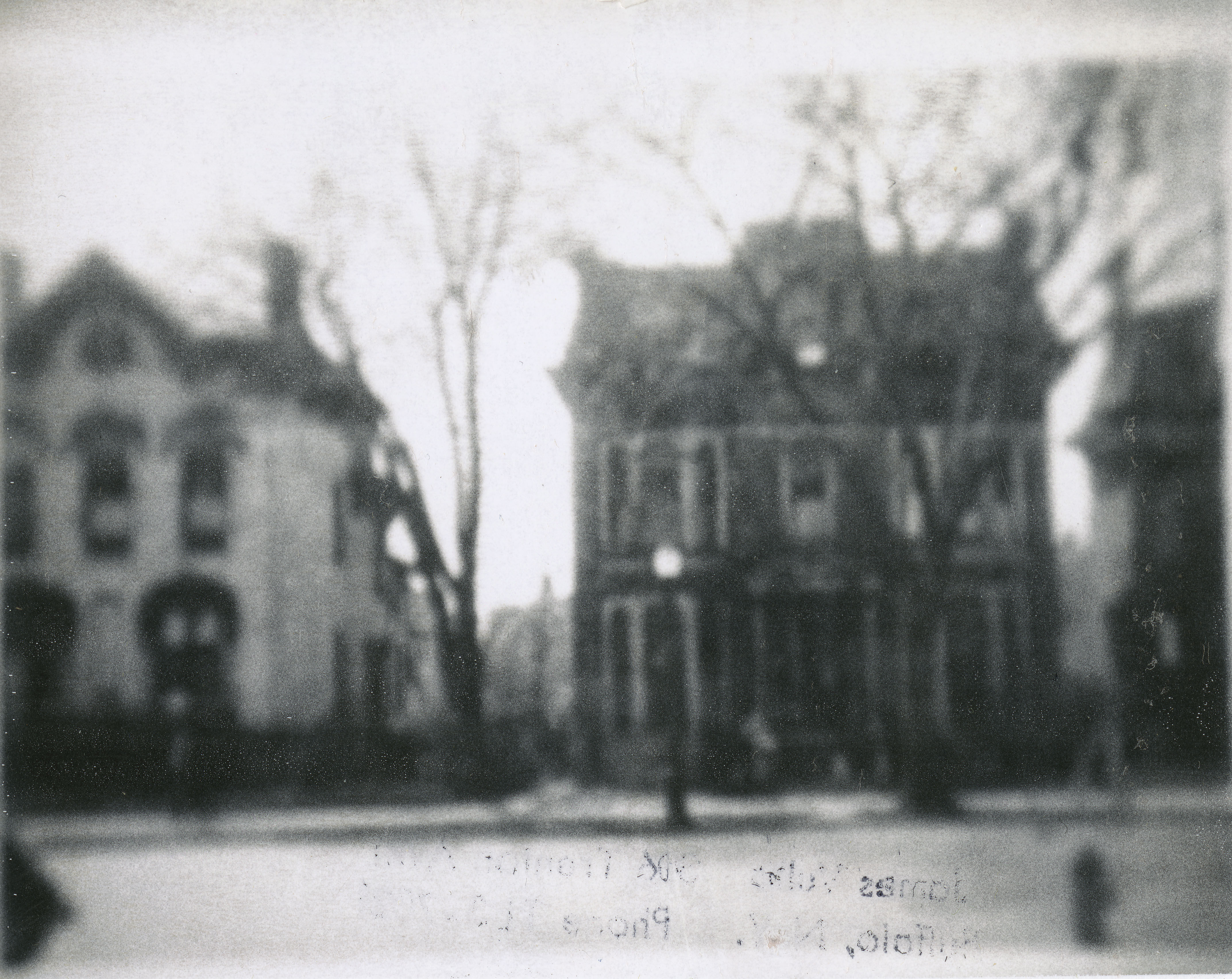 View of the site of “The Promenade” today.

This one was inspired by buildings just a few blocks away. 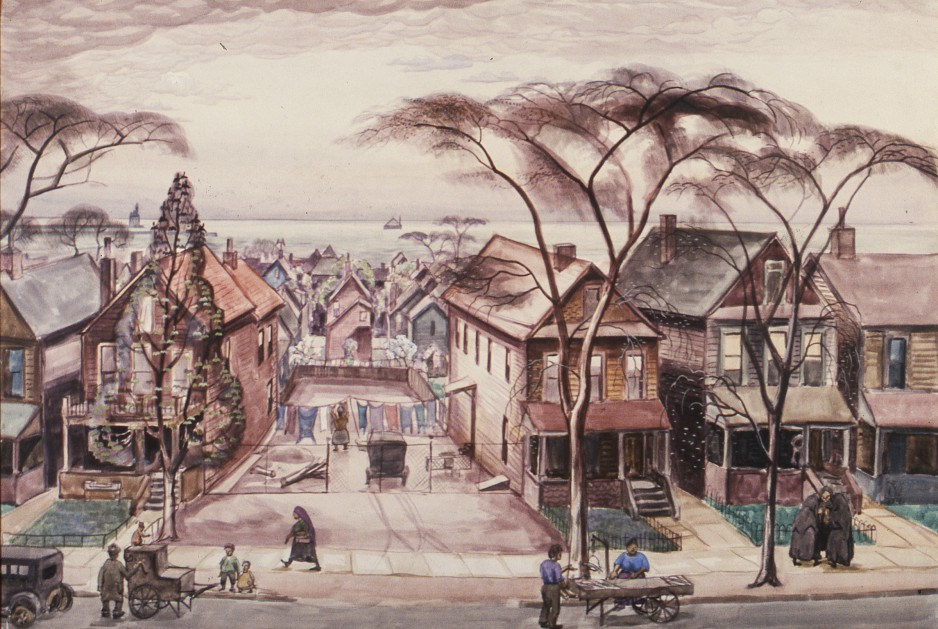 “Little Italy in Spring” was painted in 1927-28, and was found outside of Burchfield’s office window at the Birge Wallpaper factory on Niagara and Maryland streets. The West Side neighborhood, looking out towards the lake is mostly torn down, but a recognizable landmark still exists — the 1907 Buffalo Water intake building in the middle of Lake Erie. 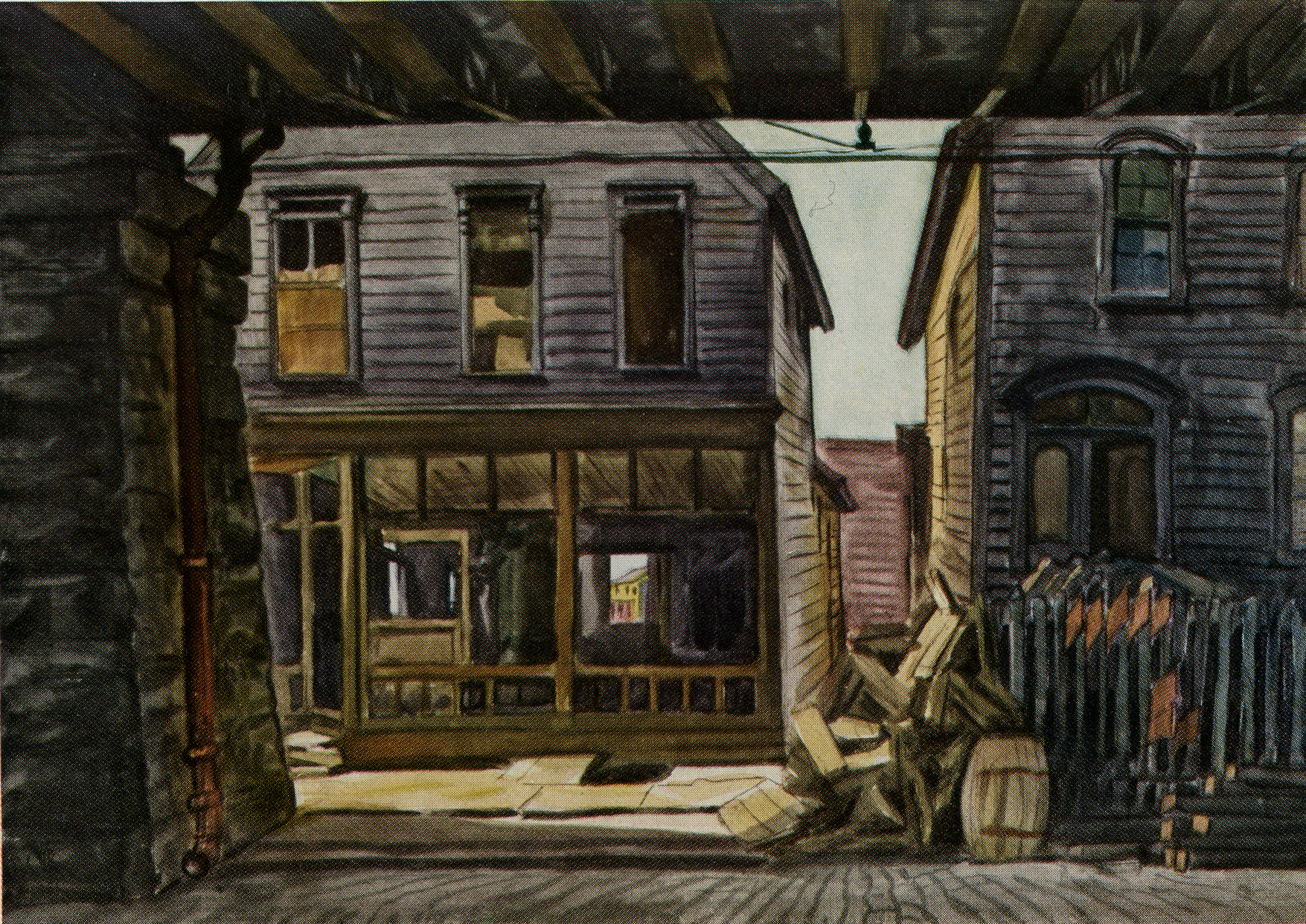 “Two Houses Under a Viaduct” stood on Exchange Street under the Hamburg Street bridge. 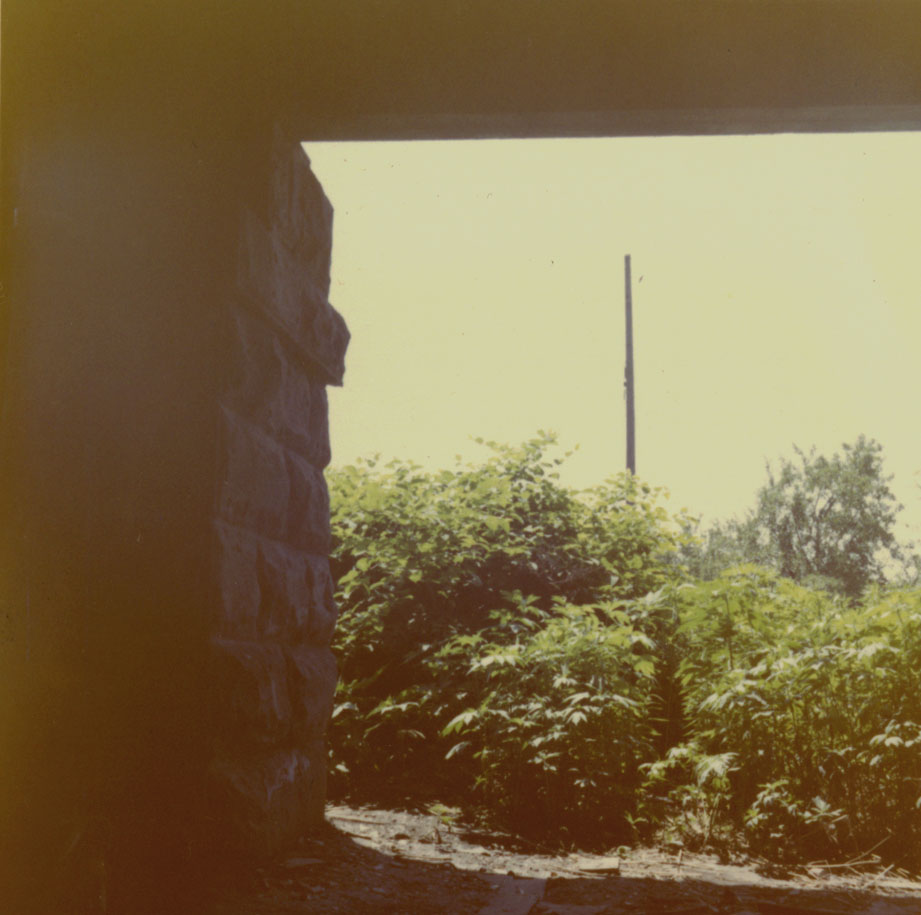 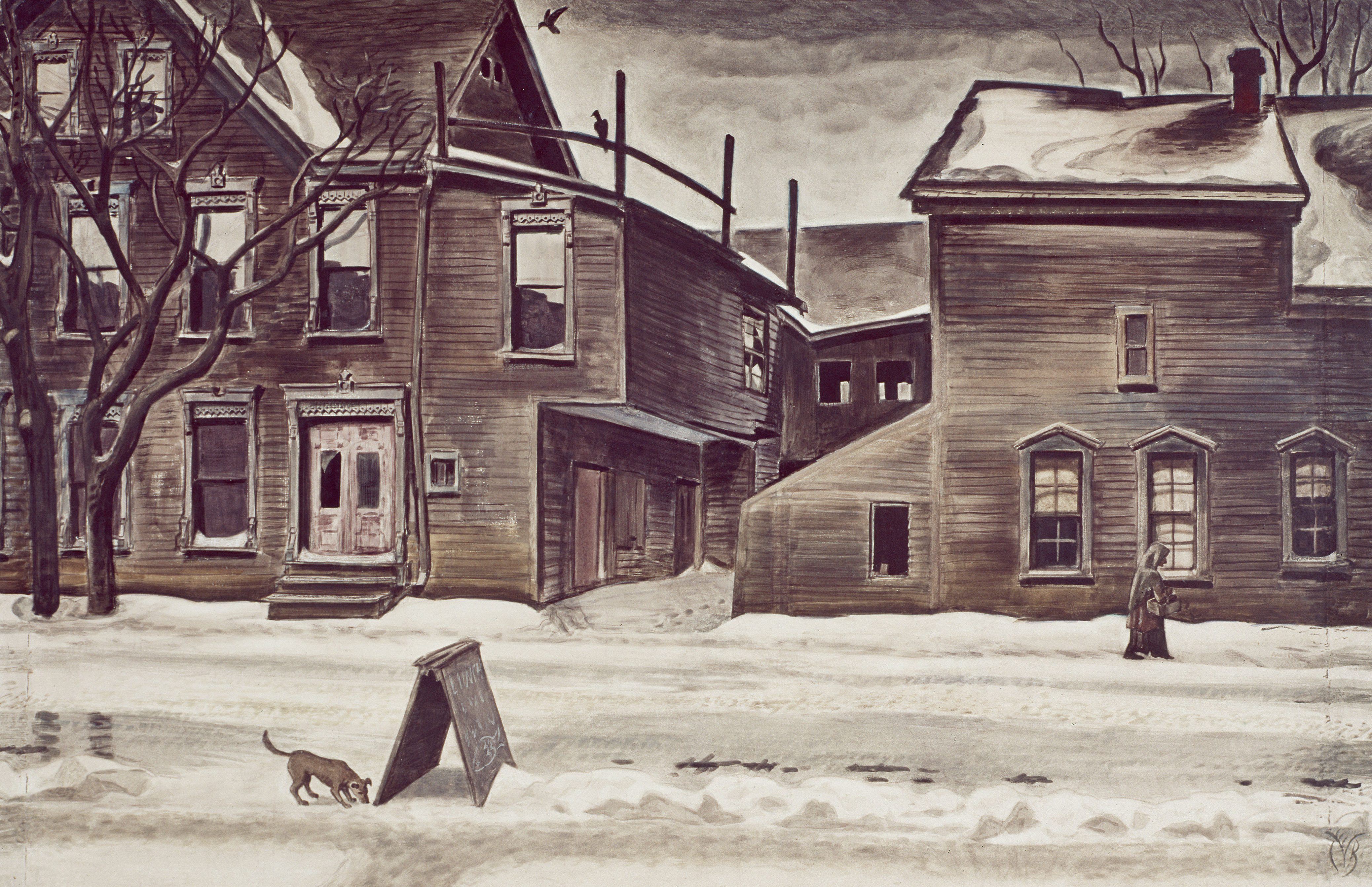 At least one of the houses was still standing for Vullo. 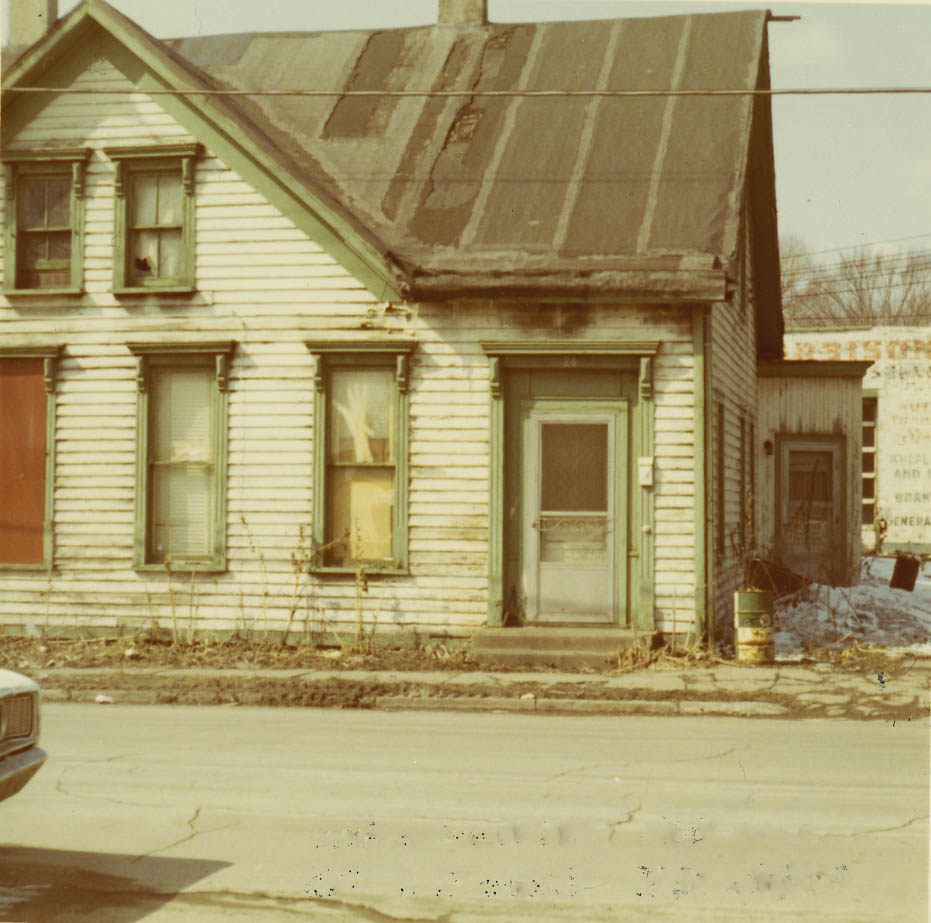 Today, the intersection looks like no houses in winter.

Burchfield’s “Sulphurous Evening” was inspired by a home at 47 Wadsworth St. 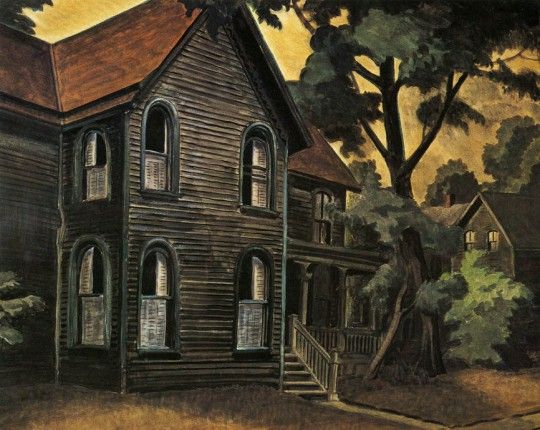 The home was still standing when Vullo was taking photographs in the mid-70s. 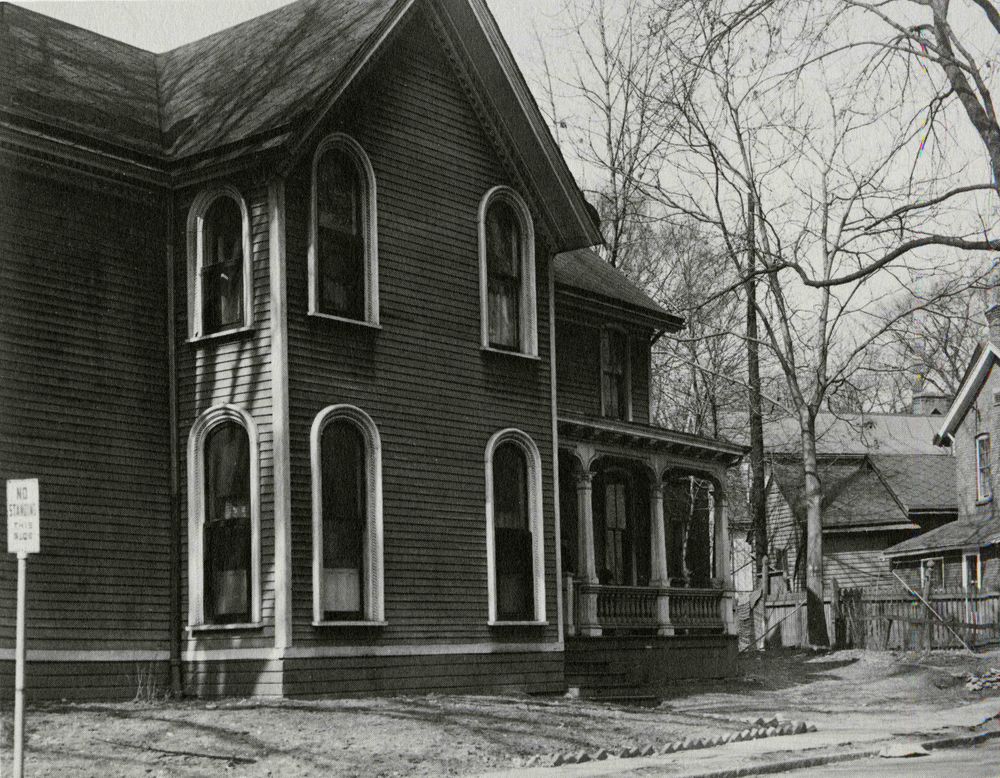 Today, 47 Wadsworth is a parking lot.

More than just the buildings, many of Burchfield’s works captured the very feeling of what it might have been like to walk the streets of Buffalo in the ’20s, ’30s, and ’40s — in an era when Buffalo was a big, grinding and action-packed city.