Just a block away from Main Street, Washington Street has been the backbone of Buffalo’s backbone for parts of three centuries. 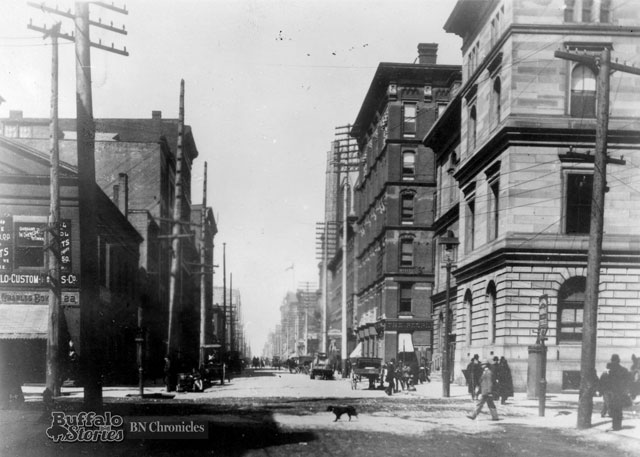 This photo offers a real flavor for what Buffalo was like leading up to the Pan-American Exposition. Tightly packed buildings and tightly packed sidewalks with plenty of people rushing around one of America’s great modern metropolitan spaces.

The photo also shows a bit of presidential history. Eighteen years before this photo was snapped, Grover Cleveland — who was between his two nonconsecutive terms as president — got into a fist fight with a political rival who called him a liar.

The fight between Cleveland and Mike Falvey, it was said, started in the gutter at Washington and Seneca — the intersection pictured — and wound up at Gillig’s Wine Merchants for a makeup session of drinking. Gillig’s was right next door to St. John’s Episcopal Church, which can be seen in the distance to the right.

Today, the corner looks a bit different, to say the least.

First, Seneca Street now ends at Washington. There’s the complication of a ballpark having been built there. Gillig’s – where President Cleveland made peace after his pugilist exploits — stood about where the Mayor Griffin statue now stands at Washington near Swan.

The original Glenny Building — visible to the left — burned down in 1905, but was then rebuilt. That building has recently been the site of $6.9 million in renovations  with plans for 36 downtown apartments to open there soon.