It’s been just about two full months since I’ve had DNA test results from Ancestry.com, and I may have had my first useful hit.I’ve had 4 or 5 different “matches” that Ancestry.com says are 96% certain to be 4th or 5th cousins. But either there’s no good lead in the family tree they have posted, or their family tree is private, and they haven’t responded to messages. That’s a bit crazy to me. Unless you’re adopted and don’t know your roots, why else would you take this test other than to grow your family tree…

So the “certain” cousins are already taking family-like liberties and doing things like ignoring emails. Sounds like my family for sure. More like 97% that we’re related.

The one neat lead isn’t much, but it’s enough to help prove something I’ve suspected.

The analytics say its a low percentage possibility that I’m distantly related (5th to 8th cousins they say) to one guy. This person’s great grandmother has my mom’s maiden name. Margaret Coyle was baptized in Ireland 18 months before my great great great grandfather was born in Ireland. Could they be “Irish twins?”
I know John Coyle was born in Ireland in June, 1846, and came to Pennsylvania as a teen. He was a farmer, unable to read or write. This comes from census information, but its all I know. I’ve never been able to find any immigration information. There was a John Coyle baptized in July 1846 in Ireland, but to fully assume that he was my John Coyle might be a stretch. A good chance, but by no means a certainty with such a common name.

Well, that John Coyle who was baptized a month after my John Coyle was born, and the Margaret Coyle I’m probably related to didn’t have matching information on the baptismal records. Not the same father, not the same county.

But some searching found the two counties, Meath and Cavan, are right next to one another. The two churches are about 10 miles apart. Sounds like a pretty solid case that these two Coyles were cousins when you mix in the DNA results.

This is exciting because it opens up the Irish Coyle line in a part of Ireland that appears to have pretty well preserved records. I’m looking forward to doing that digging.

One of my great obsessions in life, at least one I can talk about in polite company, is finding out any information at all about the Cichon branch of the family tree.

As I’ve written before, the backwards progression comes to a grinding halt with my great grandparents in Buffalo’s Valley neighborhood the late 1910s.

Census data and family tradition would indicate DziaDzia and Babcia Cichon each came to Buffalo from Poland in 1913. Family tradition says they came here separately, met at a party on Fulton Street, and were married in Buffalo. No record of any of that anywhere… Not the city, not any likely churches.

There are records for at least a dozen Jan Cichons who came to the New World 1912-14. However, not a single record for a Marianna Pochec or any Pochecs in that time frame.

There is the hope of good information coming from my great-grandparents’ death certificates. Death certificates are sealed for 50 years unless you can prove direct lineage to the deceased.

My great-grandfather died in 1967, so I have 4 years to wait. I remain undaunted in trying to milk the information I have, and building on it bit by bit.

I recently re-read an email from a Cichon cousin that mentioned that my great aunt Mary said my great-grandpa came to Buffalo through Canada. My grandpa has also said that he came through Maine. 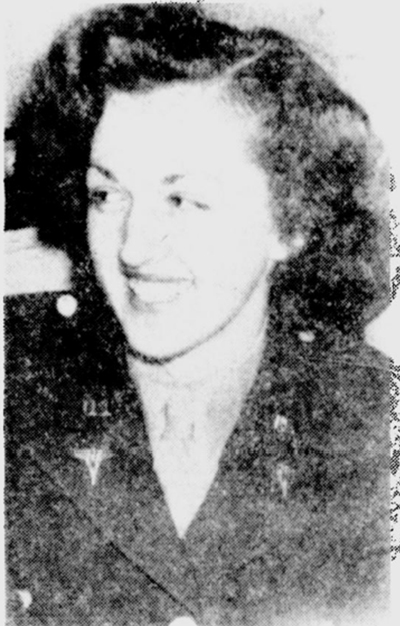 Well I’ve found a Jan Cichon, who came from Poland in 1913, who fits both of those circumstances. The boat landed in Maine, and this guy’s final destination was a brother-in-law’s house Ontario. It’s a great lead, but by no means a sure thing.

Muddying up even worse, the ship manifest is hard to read. I have no idea what this guy’s mother’s (potentially my great-great grandmother’s) name is… And there is no town in the Russia/Ukraine/Poland area that shows up in searches with a name anything close to what’s written there.

I mentioned my great aunt Mary. She served as a nurse in the Navy in World War II. Her twin sister, Olga, was an Army nurse overseas. Doing a Cichon search, I came up with Aunt Olga’s wedding announcement in a Maine newspaper. The photo shows a beautiful Lt. Cichon in her Army WAC uniform. Clicking the photo takes you to the full wedding announcement from 1946.

In a separate search for Scurr, my dad’s mom’s maiden name, I found a newspaper account of the sad story of Grandma Cichon’s brother, Terry Scurr. You can read that below.

He was just out of the Army, and was at Letchworth with a bunch of friends. He died trying to help a friend who’d slid down a cliff.

Once I was talking to Seneca Street fixture “Tony the Barber” Scaccia, and mentioned that Tony’s cut the hair of five generations of my family, from my cousins’ kids back to my great-Grandpa Scurr. Tony told me the story of Terry’s wake, in the Scurr’s upstairs Seneca Street apartment.

History and family history are amazing. When you learn a little bit, it starts to grow exponentially. 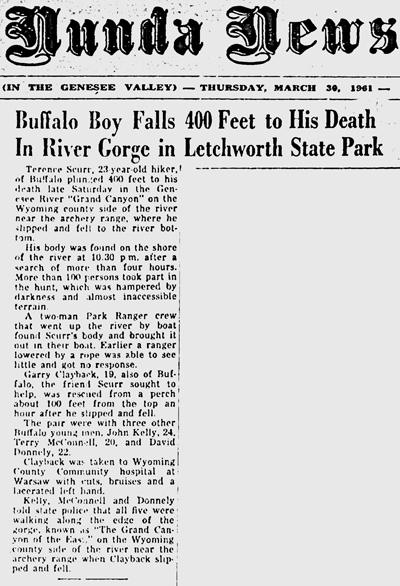