Did you ever win a Glick University T-shirt? Are you a Glicknick?

My fascination with the Glick Program started when my family spent three years  in Holliston, Massachusetts in the mid 80s, when Larry was doing afternoon drive on WBZ. 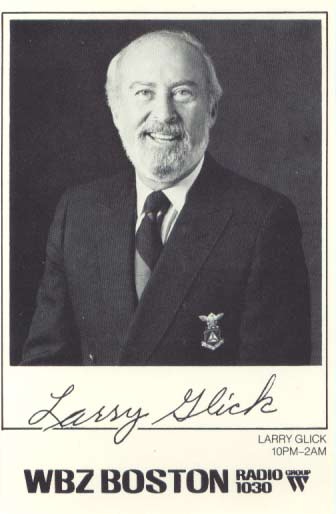 I was a pint-sized Glicknick and just mesmerized by the show. After Larry had left WBZ for WHDH, I had the chance to visit the WHDH studios, and wistfully remember seeing LARRY GLICK’S DESK– a great moment in a young life.

It might have been Larry’s multi-lingual sign-off as he went into the Peter Meade Show which encouraged me to study three foreign languages in high school and college.  And of course, there was that whistle and singing of the phone numbers (both of which you can hear at the 13:54 portion of the Glick Show below.)

Larry’s Bio as it appeared on the WMEX website when he worked at the station briefly in 2000:

Larry Glick is a Nationally known Radio Personality and a well known Boston area night club performer, especially for his hypnosis performances. Larry has been heard in 38 states as a radio personality, and he was a part of WMEX from 1964 to 1968. Larry was also a part of WBZ from 1968 to 1988, and a part of WHDH from 1989 to 1993. As well as the owner of an All Girl AM Station, Larry was a pioneer in becoming an owner of an FM station in Florida during the 1950s. He was also a major night time personality at WIOD (CBS) in Miami for several years before moving to the Boston Market. Larry is followed nationwide by all his GlickNick’s, and his popular show is a great addition to WMEX.

The Commander’s death was announced on WBZ’s website Friday, March 27, 2009.

Glick graced WBZ’s airwaves for 20 years, building up a faithful group of fans known as “Glicknics.”

Larry and WBZ-TV’s Jack Williams (right) had been close friends since 1975. Jack made frequent appearances on Larry’s talk show on WBZ.

Larry retired to Florida, where he most recently worked as a greeter at Legal Sea Foods in Boca Raton.

Glick leaves his wife Lisa and a daughter Tali, both in Florida, and a daughter, Nannette in the Boston area. Rest in Peace, Larry!