I’ve been grappling with what to say about Van Miller.

You don’t need a biography– Everyone knows, or at least confidently suspects, that he was the greatest broadcaster and entertainer to ever make a career in Buffalo.

Most people also know that he was a great story teller. I spent about 20 hours with Van after he retired from TV, recording all his stories getting ready to write a book that never happened. I still have those studio quality tapes– But maybe another day.

For me, when I think about Van, the Bills and the broadcasting– well, that’s only the half of it– as he used to say after two quarters of football.

I generally like to write about a person and their accomplishments and what they maybe should mean to you from a historical perspective. I just can’t with Van.

What I’m about to write is as much about me as it is Van, because I just don’t know how else to say any of this without making it personal.

That is to say (to stick an Ottoism in a Van piece), for as talented and amazing Van was as a personality— he was was never satisfied until he squeezed out every last bit of himself for every single person who watched and listened during his five decades in broadcasting.

I was 16 or so when I was working at WBEN and Van Miller became my friend. Really. My pal. I was working on the Bills broadcasts on the radio for a while before I became “The Game Day Producer” of the radio play-by-play. Van liked people who liked him, and I sure did like him.

He’d come down from the TV end of 2077 Elmwood Avenue and hang out with some mix of Chris Parker, Randy Bushover, Howard Simon, Rick Maloney and me in the WBEN Radio sports office, and those few minutes were always the highlight of each of our days.

Van knew that, and he liked it. Lived off it, I think. He knew the power he had in “just being himself” among people, and smiling and having a good time. And telling mildly off color jokes. And whispering swear words.

One of my occasional jobs back in those days was recording the religious and public affairs shows that would playback at 5 or 6am on Sunday mornings.

One day, with me at the controls and several Protestant ministers on the other side of the glass, Van came in, holding a pen and a reporters’ notebook, looking very serious. He importantly scrawled something on a sheet, ripped it off with a flourish, folded it and left it just out of my reach as he walked away quickly.

I rolled the chair back, opened the note and read:

He didn’t didn’t harbor any ill-will towards those men of God, he just wanted to make me laugh. At any cost. And I did. I’m also pretty sure that he was hoping that one of them would ask afterwards, “Ooh! What did Van Miller want! It looked very important!”

This was the highlight of my career up until that point, and still remains in the top 5. If my career ended that day, I’d have the story of the great Van Miller giving me a note mentioning shit and bingo. I loved it. And he knew it.

My grandpa was a ticket taker at The Aud, and Van used to come through his door. He always said Van was the nicest VIP who’d walk through in his fur coat. He was generally beloved by all the technicians at Channel 4– no small feat for a one of “the big stars.” He treated the floor guys in the studio the same way he treated all the hundreds of athletes he’d dealt with over 50 years– with a friendly smile and with respect.

When I was working with Van at Channel 4, there was a severely handicapped guy named Stewart who used to call the sports office everyday with the same question… “What’s in sports today?”

I tried to be nice, but sometimes in the throes of deadlines and scripts to write and packages to edit and highlights to cut, it was easy for any of us to be short with Stewart– especially since no matter what we said, he’d mutter, “ok” and hang up the phone.

When Van picked up the phone, he did a fully embellished sportscast for good ol’Stewart.

“Well let me tell you,” he’d shout, in more of his Bills gameday voice than his Channel 4 voice, “The boys were practicing down at Sabreland today, and Wow! Did Pat LaFontaine’s knee look great— I think he’s getting ready to come back by the time the team skates in Hartford on Saturday. The Bills brought in three free agent linebackers today– trying to put the squeeze on negoatiations with Cornelius Bennett today… and a pair of hoemruns for Donnie Baseball today— Don Mattingly 3 for 3 as the Yankees destroyed the Red Sox 7 to 3. Rain stopped play at the Mercedes open… Michael Chang and Stefan Edberg will pick up their tied match right there tomorrow.”

He’d usually end the call with some silly rhyme or play on words or pun– something so bad he wouldn’t use it on the air.

“But I tell you what— the thunder clang won’t stop Chang… he looked like dynamite today— I’m predicting he wins the tournament handily.”

This was really almost daily. We’d all be laughing, Van smiling, and Stewart getting a daily dose of sports news. I don’t think anyone missed Van when he retired from TV more than Stewart.

Van loved being Van, and loved that other people loved him being Van. I learned that from him. Have fun being who you are– and enjoy other people enjoying it.

I owe a lot to Van Miller. I owe those memories, I owe much of my early career. I would have never been plugged in as the Bills Football producer on WBEN or hired as a producer at Channel 4 at the age of 19 without the backing of my Uncle Van.

And needless to say, Van Miller saying my name 427 or so times every week during Bills games in the ’90s made me a rock star at in high school. It made me a rock star in my family. No one was really clear on what I did at the radio station, but it sounded like Van Miller personally appreciated it– so it must be great!

I think all of our lives have lost something with him gone. Despite the fact that I spend a lot of time celebrating institutions and people of the past– I am very rarely personally stirred by nostalgia. I find the past and how it relates to the present and future infinitely interesting, and even when I miss something, I rarely yearn for it.

But with that said, from inside my bones, I yearn for Van at one o’clock on crisp fall Sundays. I really love Murph– but the fact that it’s not Van has made it pretty easy to fall a bit away from Bills fandom as the team has declined. So much of what I loved about the Bills and football was the intangible greatness that Van brought to the play-by-play.

Because I’m a Bills fan, I have no idea how great a Superbowl win feels. I do know, however, that it will never feel quite as good as it would with Van’s voice box popping out of his throat telling us the long wait is over. 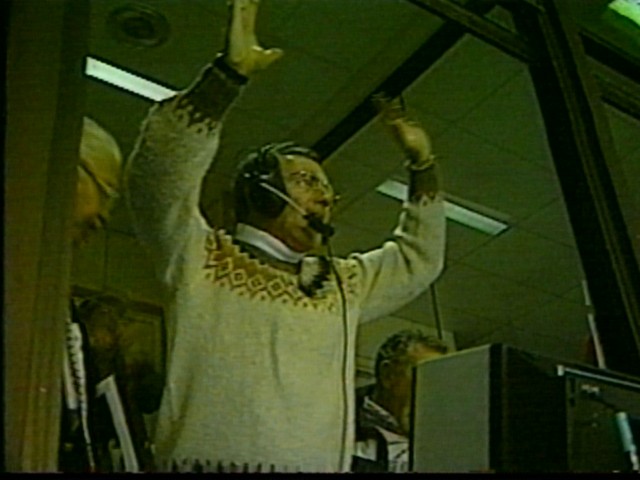