By all accounts, I have a pretty cool and interesting job. I spend my day wandering the Niagara Frontier talking to Newsmakers and regular people, often finding myself in the midst of the announcements and events that shape the lives of WNYers… 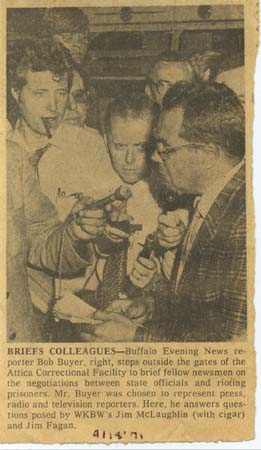 It sounds glamorous, but sometimes the important assignments can leave a reporter ragged… Like the night I slept in the car outside the State Police Barracks in Fredonia at the height of the Ralph “Bucky” Phillips hunt… Or the 5 days without a shower (!) covering Hurricane Katrina down in Louisiana.

I’m not looking for sympathy here… I’m just lamenting the fact that no one, on any story I’ve ever been on, looked as “Movie-Star Cool” as WKBW Radio News Director Jim McLaughlin did in this 1971 picture taken at the height of the Attica Prison Riot. His tie know slightly ascue, curly locks ever-so tussled, and the caption decribes him as “with cigar.” (Not to mention the extra cigars in the breast pocket.)

Chances are, no matter the era, that I’d never look that cool doing my job (OK, you’re probably right… Never look cool period.) Though I might have been smoking a cigar, I’d probably be standing there Like WKBW’s Jim Fagan or Bob Buyer from the Buffalo Evening News… Just as weary, but without the panache. Even given that I know I wouldn’t have been the cool Perry White style reporter….. It still would have been great to work side-by-side with Jim McLaughlin (with cigar).