I wish Gramps was around to share this with him, just got it today. This is his dad’s 1893 baptismal record from Obrazow, Poland. Says Jan Stanislaw Cichon was born in Glazow, Radom, Poland to Jozef and Agnieszka (nee Korona.) Like all the records from Poland at this time, it’s written in Russian. 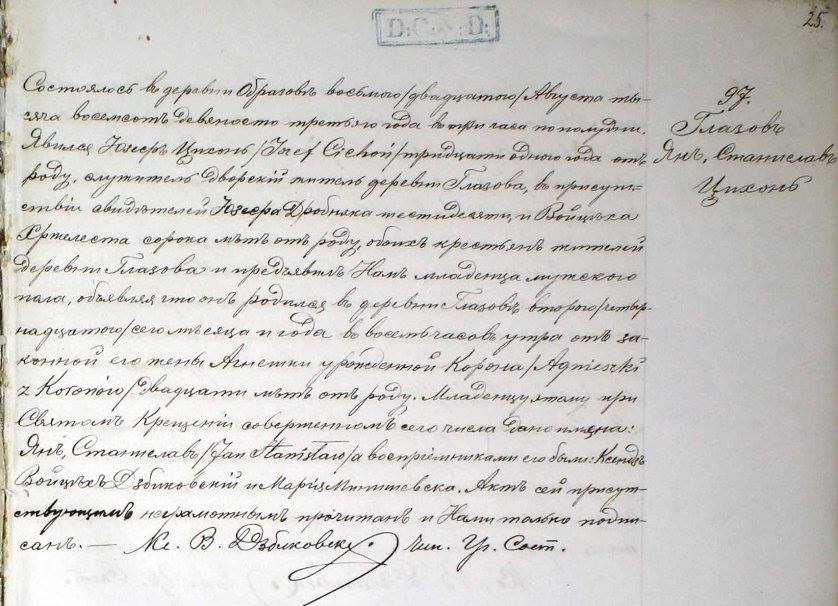 My dad lived his life hating this man, who treated him poorly for a variety of reasons. Because of some genealogical research I was doing, my dad talked to my grandpa about this guy only days before Dad died… and Dad made some peace– which I know gave my grandpa peace, too. They both had tears in their eyes, as Gramps said, “Pa really was good, son. He was just sick.” Jan Cichon spent the last decade of his life mostly drunk, self-medicating after cancer of the jaw and throat saw the lower half of his face horribly pained and disfigured.

Finding this record, even a few months after Gramps’ death, closes some kind of loop for me. Much of who I am traces back to my dad and his dad… and the way Gramps talked about his dad– It goes back to him, too. A part of me that I’m really proud of was born to a couple of Polish peasants in Southeast Poland in 1893. I’m glad to know it.