Hopefully this is better than a lightbox sign with the message “LORDY, LORDY, LOOK WHO’S 40!” on your lawn

To call this guy one of my best friends just doesn’t feel strong enough. For months, as his 40th birthday has approached, I’ve tried to think of some fun or funny or nice or meaningful way to let him know that I love him… or at the very least, make him laugh and remind him of his own mortality on this day that he enters his fifth decade on this planet.It’s been tough coming up with something that has just the right feeling to it. Forty pink flamingos on his lawn would be perfect, but this is a guy who’d actually like that a little too much.  I had some ideas for “stuff” or “events” that we’d both probably think great, but our wives not so much. 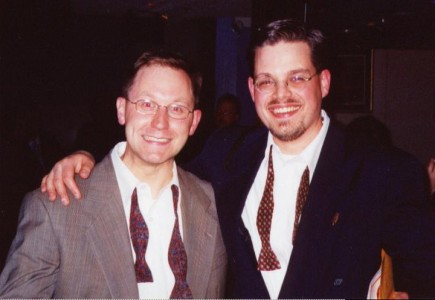 However, like many things in my life, I was filled with intentions, but it only got that far. “Marty’s Birthday” appeared on at least a dozen to-do lists, and wound up like many other things on those lists– undone.

So here I sit, the day before that big day, with nothing to show for it, except for what I am about to write.  Now I fully realize that a blog post as a birthday present is really about the grown-up equivalent of a homemade card with macaroni and glitter glued on,  but it’s the best I’ve got right now.

I was a 16 or 17 year old board operator at  WBEN when we met; he was just finishing up college, and had joined the weekend news staff at WBEN.  We both thought we were pretty freaking cool, living the dream working at W-freaking-BEN.

There’s really no doubt that providence brought us together.

We share a love for news and politics, and seem to come at it from the same perspective.

We both shared a love for Buffalo and its history, especially it’s broadcasting history. We both had the same 1959 WKBW aircheck memorized when we met. Just ask him what happened at “the fire at the George Root, Jr. farm in the Cattaraugus County Village  of Randolph” the next time you see him.

We’re both Polish-Americans, interested in learning more about and celebrating our roots. We’re both garage sale shoppers, garbage pickers, and packrats, which has now helped up both celebrate Buffalo’s pop culture history on our websites. We both shared an interest in hearing the stories of people like our friend and co-worker Ed Little.

The kicker was, we both wore bow ties, at a time when Irving R. Levine and Pee Wee Herman were the only other two people in America doing so (even Charles Osgood was mixing in the occasional necktie then.)

I remember thinking then, “Wow! Radio’s great! A few months in, and I’m already meeting people who are just like me,” thinking that dorks like us grew on trees, and that I’d be meeting similar people left and right. Luckily for society, the day I met Marty almost 20 years ago, was the last time anyone has even come close.

Marty is like a brother to me, really the big brother I never had; a mentor and someone I have really looked up to since those weekend days we worked together at 2077 Elmwood Avenue.

He introduced me to many of my Buffalo radio and TV heroes for the first time. I’d met Danny Neaverth at Bells as a tiny kid, but Marty introduced me to him broadcaster to broadcaster. That same night, I met Irv Weinstein, John Zach, and Taylor & Moore, too. My head was spinning. He took me to tag along at great broadcasting events he’d been invited to, or to stop by Stan Jasinski’s show on a Sunday morning. Or over to Jack Mahl’s house.

Marty’d give me a call, and ask if I wanted to go to Cleveland or Hamilton to take some photos or check out the sites. We’d climb into his Honda Civic, and I couldn’t have thought of any better way to spend my time. Not as great, but still there for me; Marty also drove me home the first time I ever got drunk in that Civic. I was about 17 and it was at a WBEN Christmas Party.

He gave me an autographed picture of Ed Little as a high school graduation present. “JUDAS PRIEST,” says the inscription. I  laugh every time I think about what Ed must has said when Marty asked him to sign that.

It might not sound like much, but these were some of the great experiences of my young life. Discovering a friend with the same strange interests in the same weird stuff.

I wouldn’t be who I am today were it not for my brother Marty Biniasz, who continues to blaze the trail, inspire me with his passion and hard work, and nudge me when I need it. The guy has done more before 40 than most do in a lifetime.

So, this is a really crappy birthday present… a rambling essay just to let you know that I love you, brother. But it was either this, or a YouTube video featuring some really embarrassing audio that was at the end of a tape you dubbed for me once… I think it’s a 15 year-old Marty pretending to be Danny Neaverth introducing Perry Como records. You have to be pleased I chose this.  And of course, there’s always hope that Eddy Dobosiewicz will do something with flamingos.

So “sto lat,” and Happy 40th Birthday to my mentor, my friend, my brother.