Spine-tingling. Quirky. Explosive. Imaginative. These are all words that have been printed in The News over the last 45 years to describe Rick Jeanneret’s colorful Buffalo Sabres play-by-play style. Rick, in comparing himself to another wild and exciting play-by-play man said, “I don’t think he’s quite as nuts as I am.” 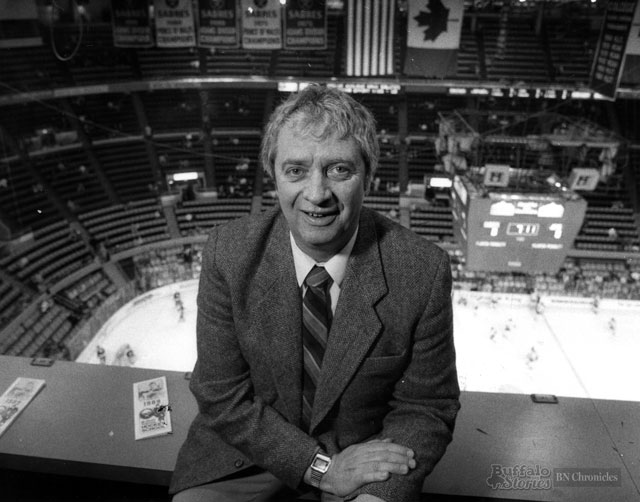 Like most of us who have grown up with Jeanneret as an inseparable part of what the Sabres are to us, it was easy to take his style and personality for granted. “This is how hockey—how Sabres hockey—sounds, right?”

The new announcers who have taken some of the load off Rick’s schedule over the last few years do the job well. They describe the play in a knowledgeable, exciting, fun, and professional manner. But Rick is, well, in his word, “nuts.” There’s nothing forced about him talking about how tough a “lady is for taking a puck off the coconut” and “not even spilling her beer.”

Rick Jeanneret and the late Voice of the Bills Van Miller are different in almost every conceivable way, but the one way  they were exactly the same is the same way they honest-to-goodness lose their minds when their team—our team—does the extraordinary. There’s nothing fake in the shouting. Rick’s goal calls mix perfectly with the explosion of screaming at taverns and gin mills and in living rooms and in cars all over the place—because it’s the same excitement.

We all remember “May Day” and “LalalalalalaFontaine” and “Hasek robbed him blind!,” but there was also, “whooooa, he really PUNCHED him,” and “HERE COMES SHIELDS,” as goalie Steve Shields skated the length of the ice to make sure his teammates weren’t outnumbered in a fight. There was also the infamous question for a Quebec Nordiques goalie  shouted in the course of impassioned play-by-play, “Richard Sevingy–  Where’s your jockstrap!?!?”

Our guy RJ, inseparable from our love for Sabres hockey, watches the game and says the things we wish we were smart and cool enough to say. If he were only one of us, he’d be the funniest, most excitable, best-informed guy watching the game with us at the tavern. Instead, for 45 years, he’s been the funniest, most excitable, best-informed guy in every tavern in Western New York.

When News reporter Lee Coppola visited Jeanneret in the Memorial Auditorium press box in 1979, he wrote that when watching Rick work behind the mic high above the Aud ice, “it’s his feet that catch the eye … a cup of beer to his right and a filter cigarette in the ashtray to his left.” 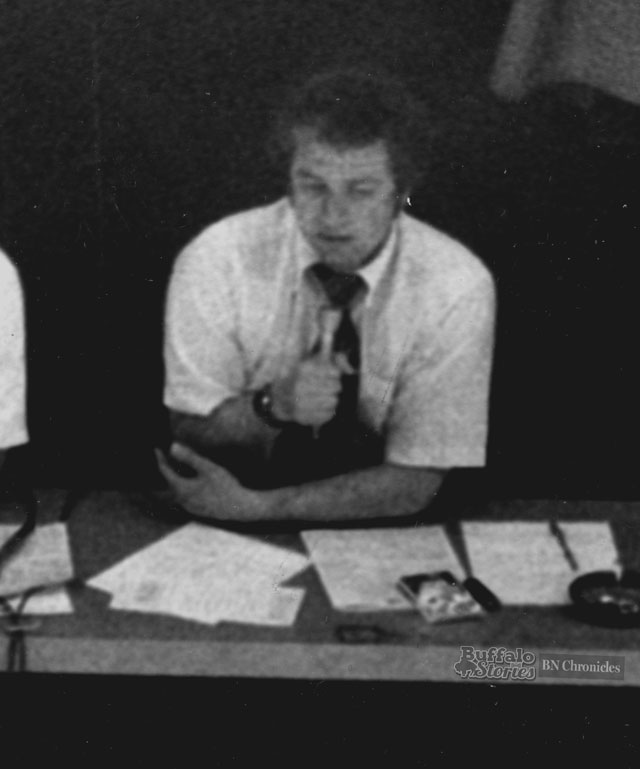 His feet never stopped tapping while he was telling us what he saw on the ice, but he says he limited himself to one beer per period to “help loosen his tonsils” while calling the game the way he’d want to hear it. By 1989, the beer drinking during the games had dried up—mostly because, Jeanneret told The News in 1992, new arenas were being built without thinking of a play-by-play man’s washroom needs.

It all started one day in 1963, when Jeanneret was a disc jockey at CJRN Radio in Niagara Falls. He went to a junior game as a fan. Despite the fact that he’d never done hockey play-by-play before, folks from the station came to find him when the guy who was supposed to announce the game on the radio called in sick. He’s been a hockey announcer ever since, including for some time with the American Hockey League Buffalo Bisons, and living inside our radios and TVs as one of the voices of Sabres hockey since 1971.