A quick glance at this 1984 shot of Western New Yorkers in a supermarket checkout line might offer the warm reassurance that some things never change. Upon closer examination, however, we can find a few changes over the last 31 years.

The first one that pops out was the accessibility of cigarettes, right next to the checkout conveyor belt. Three decades later, many supermarkets no longer carry cigarettes, and the ones that do have them behind the customer service counter or at a single designated lane. 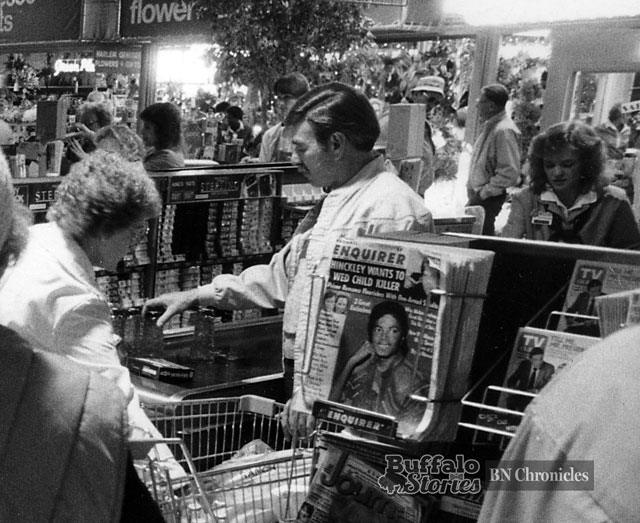 Of course the photo is different because this is a Bells Market. All Bells stores closed when the company filed for bankruptcy in 1993, and many former Bells locations were gobbled up by Quality Markets, among others.

While the photo is black and white, it’s easy to imagine the cashier’s neckerchief being either the orange and brown or later green and yellow color scheme Bells used through the ’70s and ’80s.

Plenty is different, but the closer examination also shows that some things really don’t ever change — like Michael Jackson being featured in the tabloid rack. When this photo was taken he was still at the height of his Thriller and King of Pop fame … but despite the fact that Jackson died six years ago, would anyone be surprised to see him featured on a tabloid cover on your next shopping trip?