Like just about anything marketed to kids, there is the cool and the uncool — what you want, and what you usually get. So it was with the heavily marketed snack cakes of the 1980s. 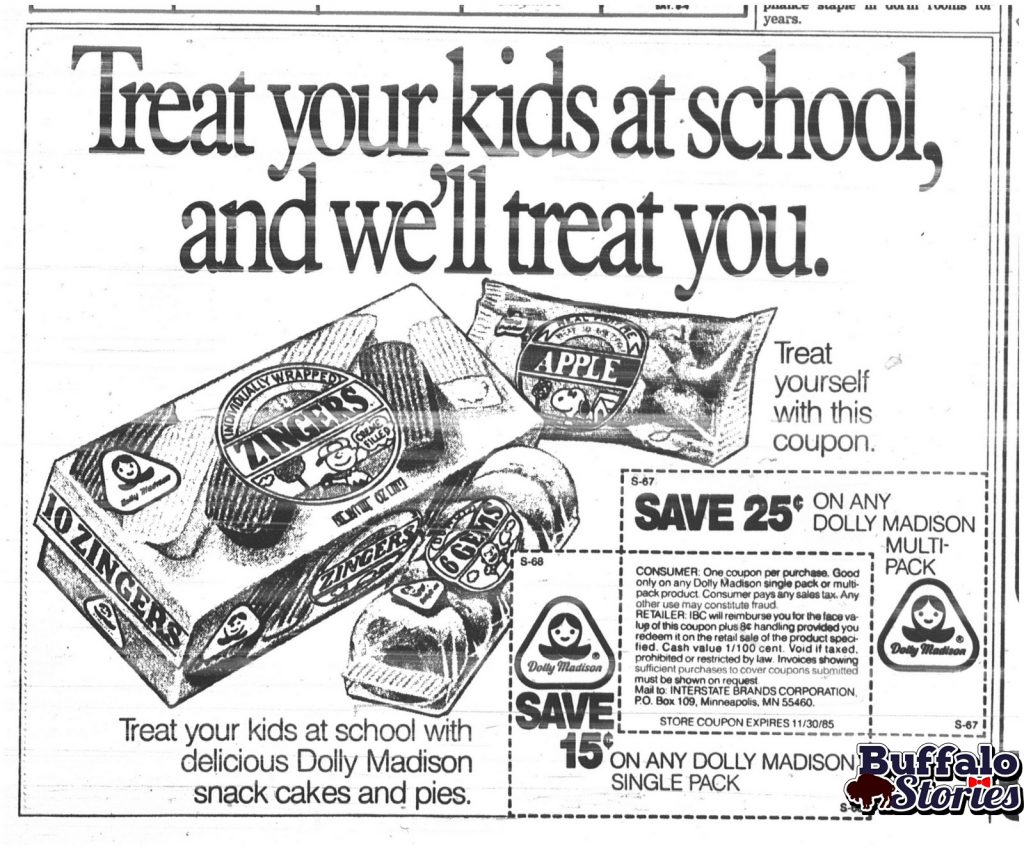 As kids of the 80’s compared what was in their Smurfs and Alf lunchboxes, the gold standard in snack cakes were usually the Hostess-brand cakes such as Twinkies, Ho-Ho’s and Sno-Balls. High class and, of course, high cost. The commercial where the kids on a playground talked to a cartoon snack cake about how they get the cream in a Twinkie is one you’ll be amazed that you remember the words to if you were a TV child of the 80’s like me. Here, go ahead and test yourself:

The fact that there were coupons for Dolly Madison’s Zingers in The News 30 years ago this week probably made it far more likely that some of us would be eating those. Before Dolly Madison and Hostess wound up being owned by the same corporate conglomerate, Buffalo had several Dolly Madison Bakery thrift stores. Those later became Hostess/Wonder Bread outlets, where lucky kids of the ’90s had parents leave with discount Hostess fruit pies.  Dolly Madison’s marketing wasn’t nearly as impressive — it was all Peanuts and Charlie Brown related. That’s not to say that kids of the 80’s didn’t enjoy watching Peanuts specials on TV, but not necessarily because they were so great; it was just that those specials were literally our only chance to see cartoons on TV during prime time. I mean, Charlie Brown was fine, but he wasn’t going to influence my snack decisions.

Then there was Little Debbie, the low-budget champion of snack cakes, and we kids realized this no matter what brands our parents bought. A kid with a buck at Wilson Farms, B-kwik or your neighborhood corner store could buy four Little Debbies — but only one package of Twinkies.

The marketing seemed to matter little when faced with the decision on how to part with our own hard-earned cash, and the Little Debbie bang-for-the-buck usually wound up being the winner, even if Zebra Cakes barely belonged in the same vaunted class at the Twinkie.