BUFFALO, NY – Aside from all the photos, audio, and video in the staffannouncer archives, there are also hundreds of Newspaper and magazine articles… You’ll see plenty of those pop on on this blog as well.

Remember these faces? After this little introduction, this post is simply an exact copy of a piece that ran in the Courier-Express Sunday Magazine in 1982.

In the Mellow half-light of the motel room, the face was strangely familiar. The coiffure was stylish but understated. The makeup was careful by emphatic. The smile was inviting but relaxed. Then there was that voice… “Good evening,” the voice intoned, “I’m Ron Hunter, and here is the news…”

For a visitor to Philadelphia, it was a startling return to these slambang days of Buffalo television of the 1970s when Ron Hunter’s face not only peered out of TV sets but also seemed to be posted on the rear end of every bus and most billboards in WNY. Since his days at WGR-TV, he has left several forwarding addresses, with anchor jobs in Miami and Chicago. (AT print time in 1980) in Philadelphia, he (was) a reporter during the week and a fill-in anchor on weekends. He has learned to pronounce Schuylkill with the same uncertain clarity with which he mastered Scajaquada. The names and places have changed, but Hunter is still on the job, reading the night’s news to an eager public.

The re-discovery of Hunter, coupled with the “opening” of the “new” television season has prompted a nostalgic examination of some of the faces and voices who have been meeting with us at 6 and 11 each evening since the lights first went on in 1948. 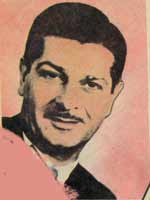 ”Its a very visible job,” says Irv Weinstein, the WKBW-TV anchorman whose longevity on camera has made him the most recognizable public person in WNY. “Since you are visible,” he adds, “you are also vulnerable.”

He became a TV news director and anchorman in 1964, when, as he likes to explain, “Channel 7’s news ratings were fourth in a three station market.” Weinstein first came to Buffalo in 1958 as a radio newsman at WKBW. Managers have come and gone, but a combination of corporate patience and Weinstein’s deft flair for news and dramatic delivery has made him a fixture, if there is such a thing in TV.

Anyone remember Irv’s predecessor? It was Bill Gregory, a guy who stayed around long enough to learn how to pronounce some Polish last names but not long enough to make much of a dent in the ratings. Gregory is now a radio newsman in Philadelphia.

Channel 7 was the last of the three commercial stations to go on the air. It began broadcasting in 1958. Thus its cast of newscasters is smaller, and includes names like Roger Lund, Hal Youngblood, Nolan Johannes, and Rick Azar, Yes, Azar. He did some news reporting as well as sports. Johannes is remembered primarily for his work on “Dialing for Dollars,” but also did some news announcing…

Announcer is a title you don’t hear much anymore, but in the old days most of the faces on TV news in Buffalo were radio announcers who walked across the hall and did a stint before the camera. 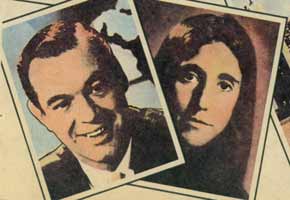 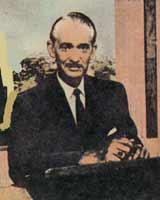 WBEN-TV (now WIVB) had a substantial headstart on its competitors. It began broadcasting in 1948, six year before Channel 2 and 10 years before Channel 7. The television and radio stations of WBEN were on the 18th floor of the Hotel Statler. In some of the earliest local public affairs broadcasting they would point the snout of the camera out a window and focus on the streets below just to give the cameramen some practice in transmitting a picture. An anonymous announcer in those days would intone a play-by-play of the street scene. “That is Genesee Street and there is a truck from Victor’s heading out to make deliveries and over there you can see the sign of Denton, Cottier, and Daniels.” It wasn’t exactly compelling, but then it was 1948.

Probably the first regular newscaster was Ed Dinsmore. He also did the “Luncheon Club” program on radio. After his death, there were others, like Frank Fredricks, Carl Erickson, Dick Westerkamp, Ward Fenton, Virgil Booth, Bill Ferguson, Lou Douglas, and Cy Buckley.

Buckley, now (in 1980), a revenue officer for the IRS in Buffalo, says that the early days were characterized primarily by reliance on radio veterans. “All we were doing was reading a radio newscast on TV. There was very little visual material. Later we got some still photos and some 16 millimeter film. There was no videotape and no rear screen projection. Nobody ever hear the term “anchorman” because that concept hadn’t been developed.” 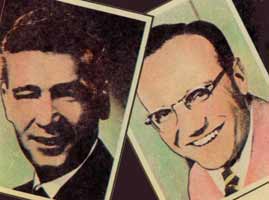 The longest running news personalities on Channel 4 were Harry Webb, John Corbett, and Chuck Healy, who also had radio responsibilities. In recent years, it has been Steve Rowan, Jim Mitchell, Allen Costantini, and the incumbants, Gary Gunther and John Beard.

Channel 2’s newscasters included early announcers like Roy Kearns, Pat Fagan, and Chuck Poth, who has been involved in local Democratic politics since his departure from TV, was one of the first to read from a telepromter rather than a script, enabling him to look directly into the camera during the newscast, a dramatic advancement. Others at Channel 2 included Lou German, John Gill, Joe Brush, Harry Gunter, Joe Pope, Goerge Redpath, Henry Marcotte, Hunter, Susan King,, and more currently (in 1980), Sheila Murphy, Molly McCoy, and Rich Kellman. (Since no roundup of Channel 2 news is complete without mentioning the long running, ubiquitous and opinionated sportcaster for the station, here goes: Bill Mazer).

Hope you enjoyed this Vintage Courier-Express piece from Dick Hirsch, written in 1980.