I spend a lot of time thinking about things that people like to remember and how to present those things in a way that make to not only make them smile, but also realize how those memories help shape how we got where we are today.

When I’m posting a blog post here or a piece on history.buffalonews.com, I’m usually thinking about the larger Western New York audience, or maybe a slightly smaller group or community– rarely am I trying to speak to a single person with a post.

It’s really gratifying, then, when i share something that we all love and remember ends up meaning something very personal and direct for someone who sees it.

In one instance, a man who was featured in a 1970 news clip found the clip on YouTube and left a comment.

The video, shows a pro-Richard Nixon, “anti-antiwar” march on Buffalo’s City Hall in 1970. I interviewed WBEN/Ch.4 newsman Lou Douglas several times before his death, and each time he spoke about covering this march— and his fear for the safety of the anti-war counter protester he interviewed.  The young man– now a retiree– found the video on YouTube, and took the time to finish and add to the comment he couldn’t finish 45 years ago. 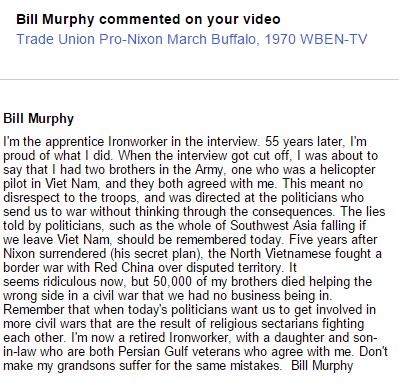 The other instance was a bit more lighthearted and fun. If you lived in Bufalo in the 80’s, it’s likely you can sing the line, “You’re gonna wanna…. Come to Lackawanna…” It’s all because of this commercial, which I posted on YouTube a few years ago.

The Ridge Dining Furniture Family– always featured in these spots which ran through the 80’s and into the 90’s– wrote to say they thought they’d never see one of these spots again.

I explained that I found this commercial on a newscast that I had recorded as a kid– but also that I’d be on the lookout now for any more that I find.

It’s fascinating and edifying for me to reconnect our city to its past– and when it means something extra special to a particular person or family– its even more rewarding.